Home Uncategorized California is Due for a Megaflood 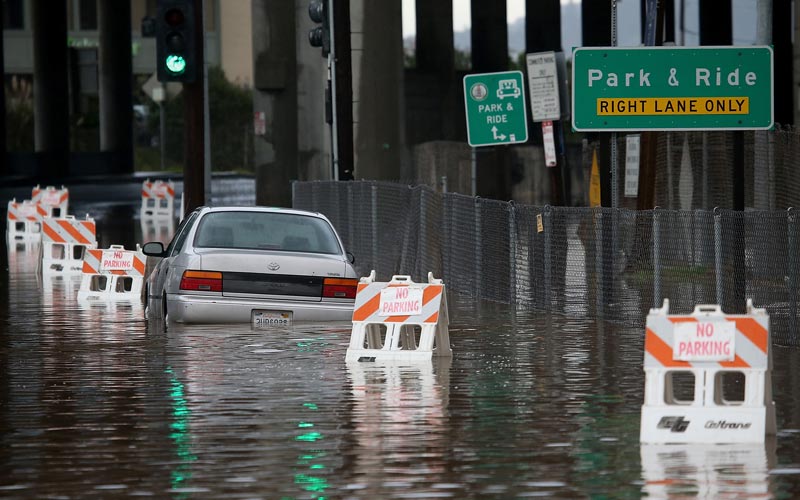 The flood of 1861 was worse than you can imagine. The statewide catastrophe—a 43-day series of storms that began in December and lasted through January of 1862—turned much of the Central Valley into a literal inland sea. Anaheim was submerged under four feet of water. In Sacramento, the governor needed a rowboat to get in through the second story window of his house. One-fourth of the state’s economy was washed away. Thousands died.

It wasn’t the first time such flooding had occurred, and it won’t be the last. A megaflood, unofficially defined as an exceptionally massive flood, is statistically due in the state within our lifetimes. In a 2013 article for Scientific American (summary here, because you need a subscription to read that first link), meteorologist Michael Dettinger and geologist Lynn Ingram say that the geological record shows a pattern: Every 100 to 200 years atmospheric rivers feed rainfall-induced megafloods, plunging vast swaths of the state underwater. It has been 155 years since the last one.

RELATED: It’s the Rainy Days That Remind Us Why the L.A. River Is an Ugly Concrete Channel

Per the U.S. Geological Survey’s ARkStorm scenario (which is a crazy-thorough analysis of the impact a megaflood would have on the state), a storm of 1861’s potency lasting just 23 days has the same annual likelihood of occurring as a 7.8 magnitude earthquake and would result in three times the loss (around $725 billion) in damage and business interruption. The deluge would overwhelm current flood-protection systems, covering significant portions of the Central Valley, the San Francisco Bayshore, and San Diego, Los Angeles, and Orange counties. The water could reach depths of 10-20 feet in the worst areas, flooding a quarter of all buildings, and displacing 1.5 million residents.

Is the current storm a cause for concern?

Though a megaflood has only occurred once in California’s recorded history, we know it was brought on by the same weather patterns we’ve been feeling the effects of for the past week. In NorCal over the weekend, hundreds of people were evacuated, thousands more have been placed under evacuation advisory, and the floodgates of the Sacramento River were opened for the first time in years. It’s being called the most powerful storm to hit the state in a decade, but it won’t last long enough to result in a megaflood (neither Dettinger nor Ingram are concerned). The rainfall is expected to lighten up on Thursday, having wreaked plenty of havoc, but falling short of mega status.

How to prepare for a megaflood

Like the Big One, the megaflood will come—and it’s important to keep that possibility in the back of your mind. A small amount of paranoia is good because it propels us to prepare.

Real preparation for a disaster like that needs to happen on a macro level. “It’s kind of preachy, but we really truly need to stop developing and building into what are, in fact and in nature, the floodplains of our rivers in California.” Dettinger says, pointing out steady development near the California Delta, which sits below sea level and is protected by a system of levees (that are, according to Dettinger, often old or poorly designed). “We’ve got all these reservoirs and canals and all that stuff, and it’s a tendency to imagine that we don’t have to worry so much about getting flooded. In fact, California’s storms are big storms. Almost inevitably, they get us into a situation where the reservoirs are full, and there’s no place to catch the water.”

Individually, preparing for a megaflood looks a lot like preparing for a major earthquake. Anticipate power outages and an interrupted water supply. Keep three days’s worth of drinking water and nonperishable food in a cupboard, along with flashlights, a radio, cash, and a fat stack of Mad Libs. And, you know, definitely look into flood insurance, too.

Thomas Harlander is a staff writer at Los Angeles magazine. You can follow him on Twitter and Instagram. He recently wrote “An Insider’s Guide to the 100 Hidden Gems of L.A.”