A Democratic candidate for CA-25, the congressional seat once held by Katie Hill and currently occupied by Republican Mike Garcia, is pulling a misleading ad that some complained took credit for another candidate’s accomplishment.

In a series of ads posted on Facebook, congressional candidate Quaye Quartey appears in front of a graphic demonstrating that Mike Garcia barely eked out a win by 50 to 49.95 percent in the 2020 election. But, by virtue of Quartey’s placement—not to mention text that says “2020 ELECTION RESULTS”—a person who didn’t know better might think he was the one who earned 49.95 percent of the vote. In reality, that candidate was Christy Smith, who lost to Garcia by a mere 333 votes in the 2020 general election. Quartey didn’t run in the last election. 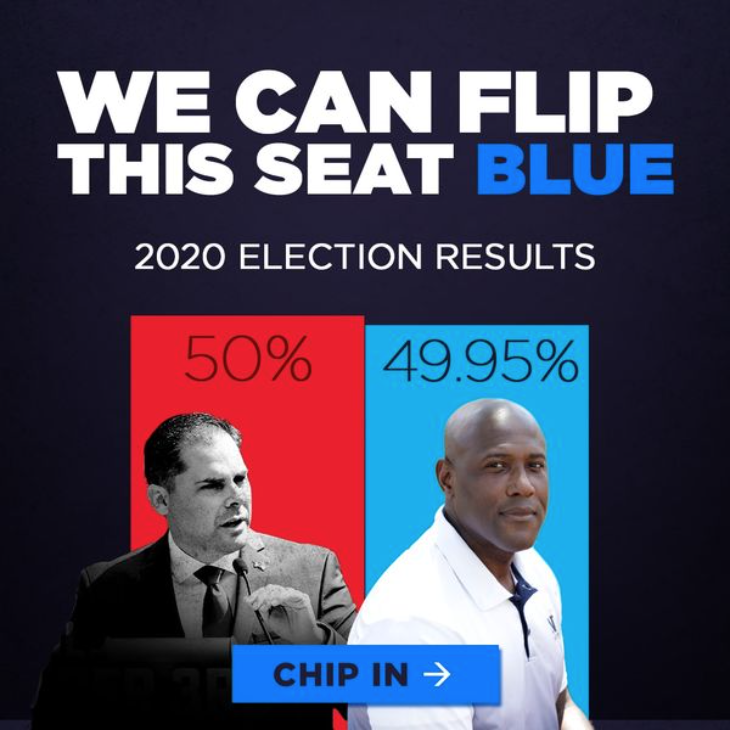 An ad that went live Thursday boasted, “333 VOTES. That’s the margin Republican Mike Garcia won by in 2020. That means we can FLIP this seat in CA-25 and make it work for the will of the people, not the will of Donald Trump.”

Smith—who lost to Garcia in both a special election in March 2020 to replace Hill following her resignation from Congress and in November 2020—is again running for the CA-25 seat in 2022.

In a statement to Los Angeles, Smith accused Quartey of purposely misleading potential donors. “With Republicans doing all they can to promote the Big Lie about 2020’s election results as an excuse to roll back voting rights, it’s absolutely abhorrent that any Democratic candidate would steal from the Republican playbook in a Democratic primary,” she said. “Intentionally targeting seniors and people out of state with these false claims shows my opponent both knew he was lying, and was determined to trick people into believing his lie. Sadly, this is par for the course for female officials and candidates whose accomplishments are all too often claimed by men who didn’t earn them.”

Some Twitter users agreed that it looked like Quartey was slapping his face on a woman’s accomplishment. “This is a clear example of what it is to be a female candidate,” one user wrote. “Men take credit for your work.”

This is especially hurtful. Never mind that @QuayeQuartey voted in #CA52 last Nov, moved to my district of #CA25 just to run. He is claiming MY vote I casted for Christy, was his.

This is a clear example of what it is to be a female candidate. Men take credit for your work. https://t.co/Fd5lbCPMzU

“This is so blatantly misleading,” writes another. “Those numbers belong to our next Congresswoman in #CA25 @ChristySmithCA.”

This is so blatantly misleading. Those numbers belong to our next Congresswoman in #CA25 @ChristySmithCA – of the people, for the people. @QuayeQuartey is a district shopper, completely unknown & unresponsive to the community he says he wants to represent. #TeamChristy ALL IN. https://t.co/1M83nhxzgR

Quartey, a former U.S. Navy intelligence officer and a recent transplant to Valencia from La Jolla, retired from the service and got his Masters in Business Management from Stanford. He currently runs a small business “whose mission is to grow other small businesses that serve working families in their communities,” his website says.

After Los Angeles inquired about the offending ads, a rep for the candidate’s campaign said, “We didn’t intend to present Quaye as the candidate that lost to Mike Garcia twice in 2020 in a district President Biden won by double digits. We’ve pulled the ad to avoid any confusion about the graphic.”

Quartey and Smith are among a field of six Democratic candidates hoping to make a single-term congressman of Garcia, whose voting record runs deep red in a district that leans blue. Since taking office, Garcia has opposed certifying the election in Pennsylvania and Arizona, impeaching Donald Trump for his role in the January 6 insurrection, legalizing Dreamers, and reauthorizing the Violence Against Women Act.

Can Cecil Rhambo Establish Himself as the Reform Candidate to Beat in the Sheriff’s Race?