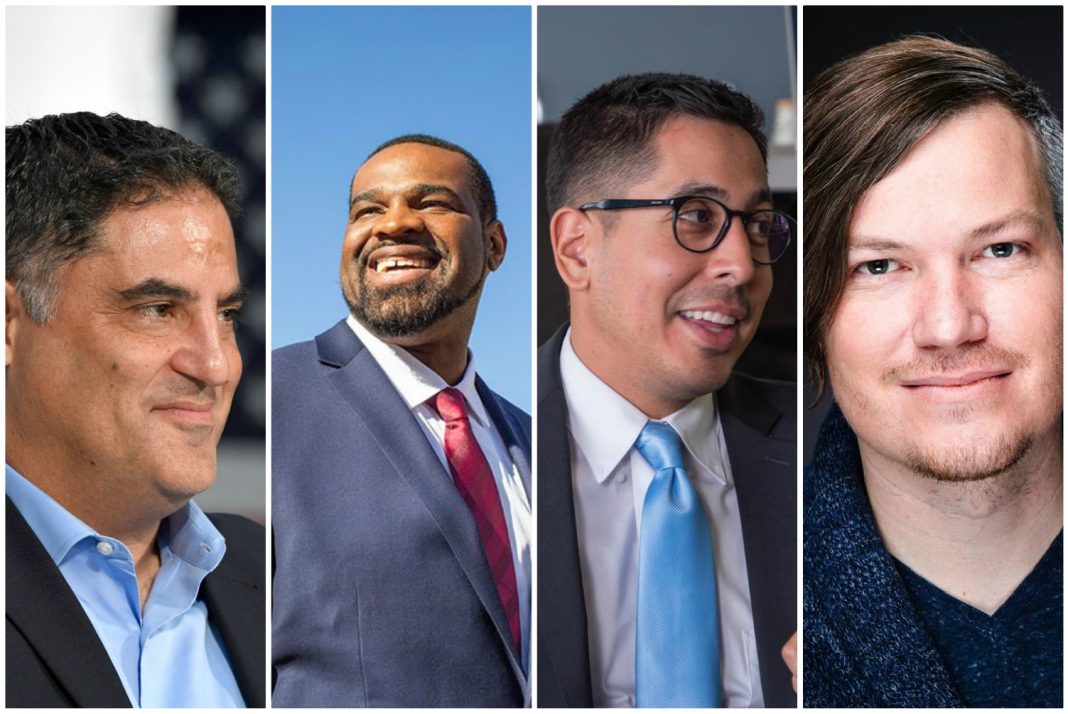 On Thursday night, four of the Democrats vying for Katie Hill’s vacated congressional seat gathered at Transplants Brewing in Palmdale. As weeknight drinkers played games of supersize Jenga in the next room, candidates Aníbal Valdez-Ortega, Getro Elize, Christopher Smith, Cenk Uygur, and moderator Stephen Daniels, host of the podcast The Talk of Santa Clarita, assembled on stage in front of an audience of nearly 100–a high turnout for a political event in this part of northern L.A. County.

Absent from the proceedings was Christy Smith, the presumed frontrunner to represent California’s 25th Congressional District. As a member of the State Assembly, Smith was obligated to be in Sacramento and was unable to attend. While she may not have been in the room, her candidacy was one of the night’s top topics.

According to the candidates, the campaign of Christopher Smith (no relation to Christy Smith) reached out to Assemblywoman Smith’s campaign with a number of possible dates, receiving no response beyond a tweet that stated, “Hey Fellas- Got your letter. 1. It’s Assemblywoman Smith 2. Thanks for the firefighter stamp- proud to have their endorsement 3. Return address not in #CA25??”

Hey Fellas- Got your letter.
1. It’s Assemblywoman Smith
2. Thanks for the firefighter stamp- proud to have their endorsement
3. Return address not in #CA25??
Supporters- first fundraising deadline 12/31:https://t.co/UD0qgxChjE pic.twitter.com/CllAUQbSOs

“It was very disappointing that one candidate felt she was entitled to the seat and didn’t want to speak to the voters,” Uygur said after the debate. “We sent four emails to her. We were not at all dead-set on this date, having told her we would debate any time, anywhere…it’s so obvious that she doesn’t want to debate, and anybody who writes otherwise is being not only disingenuous, but weirdly protective of a particular candidate.”

A representative for the Smith campaign notes to Los Angeles that the California State Assembly calendar is publicly available online and offered a statement regarding her absence from Thursday’s event, noting in part that “the Assemblywoman is committed to having a robust and inclusive dialogue on the issues affecting the people of the CA-25. That is why Christy is looking forward to participating in a legitimate forum, inclusive to all candidates from all parties and which is reflective of the open primary election.” Neither former CA-25 congressman Steve Knight nor the other Republicans in the race were invited to participate.

The candidates present were eager to connect Smith’s absence from the debate stage to a growing displeasure regarding her status as presumptive leader in the race.

“We each reached out to [Democratic organizations] but they said, ‘Nope, we already have a candidate to endorse,’” Elize said to cheers from the crowd. “It’s Christy Smith, the golden child. It’s crap, Stephen. You know it and everyone on stage knows it. If she even cared about her constituents, she’d be here on stage.”

“I came here because progressives have no choice,” Uygur said. “The establishment said, ‘We’re going to go with a conservative Democrat and everybody’s going to like it.’ Well, I don’t like it. Tons and tons of voters here don’t like it.”

The candidates also took the opportunity to discuss their own positions, hitting every popular talking point of the 2020 election season: Green New Deal (all in favor), Mitch McConnell (all in favor of voting out of office), Medicare for All (all in favor except for Christopher Smith, who implied he’s willing to budge for “something better”), and the impeachment of Donald Trump (all overwhelmingly in favor).

Valdez-Ortega, Elize, and Uygur all offered full-throated endorsements of Senator Bernie Sanders’ presidential run. Only Christopher Smith disagreed. “As much as I love Bernie,” he said, “It’s got to be Elizabeth Warren…It’s time for women to take office.”

Since the candidates—all of them political first-timers—share similar stances on the big progressive issues, there wasn’t much room for actual debate. Besides their personal backgrounds, one of the biggest points of difference between the four might be where each is from. Uygur and Christopher Smith reside outside the district they are running to represent.

“My kids are here, and I have everything to lose if someone doesn’t represent this district well,” Elize told us after the debate. “I actually live here. What we want here in Palmdale is different from what they want in Santa Clarita. They call this a bedroom town. You sleep here, you work there. It’s like they’re the hierarchy, we’re the serfs. And it’s a little offensive, you know? But it doesn’t have to be…we need someone that represents all of us here.”

Uygur countered that he doesn’t agree that it matters is somebody lives in the district, so much as whether they live “for” the district.

Late in the debate, the conversation circled back around to corruption within the Democratic party. Stephen Daniels asked the candidates, “As a congressman, how do you work with a Democratic party you claim is corrupt?”

“You work on not being the problem,” Valdez-Ortega said bluntly. “Christy Smith is the problem.”

RELATED: Cenk Uygur Is out for Katie Hill’s Seat. When it Comes to Republicans, He’s Ready to “Rip Their Face Off”

As the CA-25 Race Heats Up, a Candidate Gets Called Out for a ‘Misleading’ Ad