Home Business Byron Allen’s David and Goliath Battle with Comcast Made Him a Crusader... 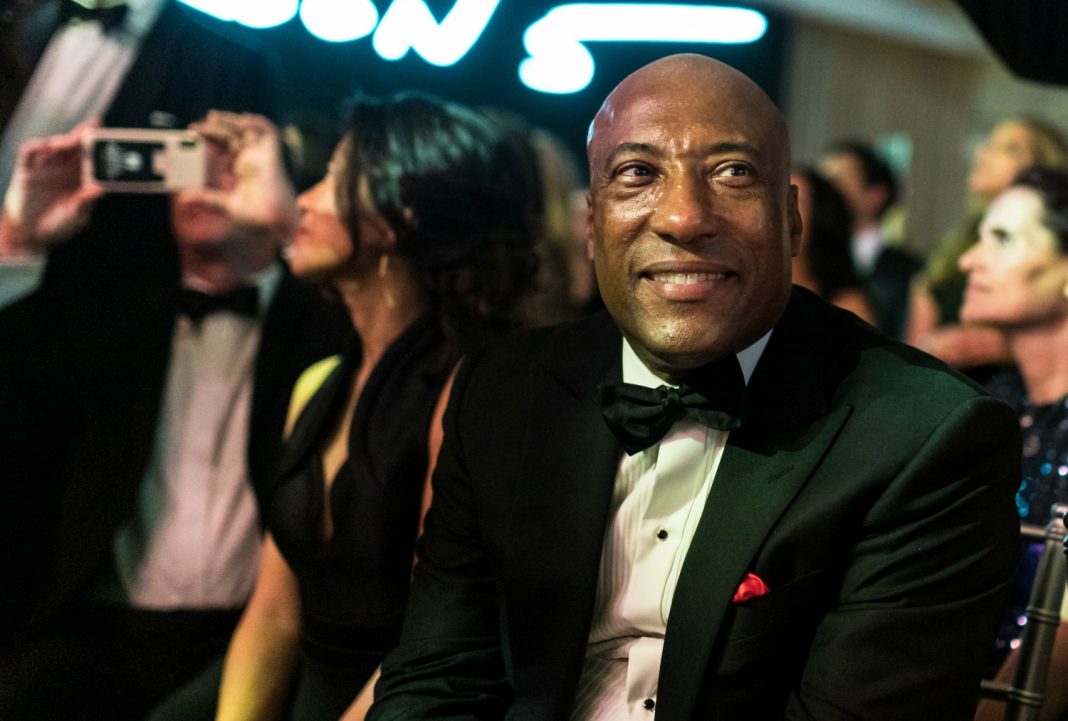 For years, Byron Allen has waged a kamikaze crusade against Comcast and Charter, which together control close to 60 percent of the cable TV market. The African American media mogul was intent on them carrying his cable TV channels. When they refused, he accused the companies of racial discrimination and, in 2015, sued them both.

Last week, after taking his battle all the way to the U.S. Supreme Court, Allen and one of the carriers reached a settlement agreement. The financial details weren’t disclosed, but Comcast will now carry three of Allen’s channels—Comedy.TV, Recipe.TV, and JusticeCentral.TV—and extend its distribution deal with the Weather Channel, which Allen bought in 2018.

Allen, 59, started writing comedy at age 14 and broke into Hollywood on The Tonight Show in 1979, when he was just 18. Forty years later he’s one of the most successful media figures in America and the first and only African American to own 100 percent of a Hollywood media studio that produces and distributes TV and movies for all audiences.

“There has never been a black man who owns the kind and this amount of television, and entertainment assets that he does,” says Paula Madison, an African American executive formerly with Comcast/NBCUniversal. “Byron broke the mold.”

His company, Entertainment Studios, owns eight cable channels and distributes 64 cable and syndicated TV shows, including Funny You Should Ask, Justice for All with Judge Cristina Perez, and Entertainers with Byron Allen (which he continues to host).

To grow his company, Allen has been on a buying spree, scooping up the Weather Channel for a bargain $300 million, partnering with Sinclair Broadcasting last year to acquire 21 regional sports networks for $10.6 billion from Disney, and buying 15 TV stations in two deals for $470 million.

Allen fought an uphill battle in his quest to convince Comcast and Charter to carry his channels. Every year, hundreds of cable networks compete fiercely to get picked up by major carriers. In 2015, Allen settled a lawsuit with AT&T requiring DirecTV to carry some of his channels. And in 2015, after negotiations with Comcast ground to a halt, Allen sued them for $20 billion. He also filed a $10 billion suit against Time Warner (later Charter, owner of Spectrum), building his legal case on a law first passed in 1866 to help freed slaves win contracts. When it was filed, Comcast called Allen’s suit “frivolous,” and in a statement claimed it had been involved in “good faith negotiations” to strike a carriage deal with Allen.

Many Hollywood insiders didn’t think Allen’s David versus Goliath suit had much of a chance. He did lose twice in federal district courts, but then was successful twice in federal appeals court. After his appeals wins, Comcast and Charter asked the Supreme Court to weigh in on what constitutes discrimination under the law. The High Court chose Comcast to try, but turned down Charter.

When oral arguments were heard last November, Comcast got some special help from the White House. President Donald Trump urged Attorney General William Barr to have the Justice Department file an amicus brief supporting Comcast. The DOJ asked the court to narrow the definition for racial discrimination lawsuits.

In March, the Supreme Court ruled nine to zero against Allen on a key technicality. Before Allen’s suit, plaintiffs only needed to provide plausible allegations that race was a “motivating factor.” Now they are required to show that racism was the sole cause of prejudicial misbehavior.

But Allen was undeterred. “I’m ready to spend $30 million to make my point,” he reportedly vowed to a colleague. His final legal tab may exceed that amount.

Charter argued that ruling did not confirm the validity of alleged racial statements and that the First Amendment barred the claim based on its editorial discretion about what channels to carry. “This lawsuit is a desperate tactic that this programmer has used before with other distributors,” Charter in a 2018 statement.

Now that Comcast has settled, it appears the former comedian will have the last laugh.

“We are pleased to have reached this multifaceted agreement that continues our long relationship with the Weather Channel while bringing Xfinity customers additional content,” Bec Heap, senior VP of video and entertainment for Comcast Cable, said in a statement.

Critics, meanwhile, have suggested that he took advantage of the tense atmosphere following the murder of George Floyd to get Comcast to accede to his demands. “When I saw that the case had settled, I was inclined to say, yes, [Comcast] felt pressured and just wanted to get it out of the way,” says columnist Elura Nanos of Law & Crime. “Comcast didn’t give up anything really big. It seems more like a business decision.”

But sources close to Allen insist the deal was unrelated to the recent protests and racial reckoning. “We were done with this agreement months ago.” says a top executive. “Paperwork was going back and forth. Even after the 9-0 Supreme Court vote against us, Comcast said, ‘Let’s go, let’s get it done.'”

The showdown seems to have had a galvanizing effect on Byron. For most of his career Allen remained staunchly apolitical. He supported President Obama at first, but in 2015, after Obama called looters in Baltimore “thugs,” Allen said, “President Obama is, at this point, a white president in blackface.”

In 2016, according to a friend of Allen’s, he told President Obama that Black entrepreneurs are at a disadvantaged because they don’t have the same access to capital as white business people. The banks, he said, are “not making loans to African-Americans, which is why unemployment for white people went down, but unemployment for black people went up.”

In 2016, Allen was rumored to be considering voting for Trump, but eventually sided with Clinton, donating to her campaign.

Since then Allen has become a vocal advocate for civil rights. Friends say he now sees himself as the “Jackie Robinson” of show business, a pinstriped crusader against corporate racism. On June 8, as protesters mobilized across America, Allen published a more than 3,000-word guest column on Deadline.com, calling on white-owned institutions to offer Black businesses access to the same economic opportunity and capital that they afford to whites. A week later he amplified his message with splashy double page ads in The New York Times, The Wall St. Journal, and The Washington Post. Another ad appeared in the Los Angeles Times over the weekend.

“Byron has been in the trenches since he was 20,” says Madison who met him two decades ago when he was pitching shows to her at KNBC. “He’s almost 60 now. But he’s not finished yet!”