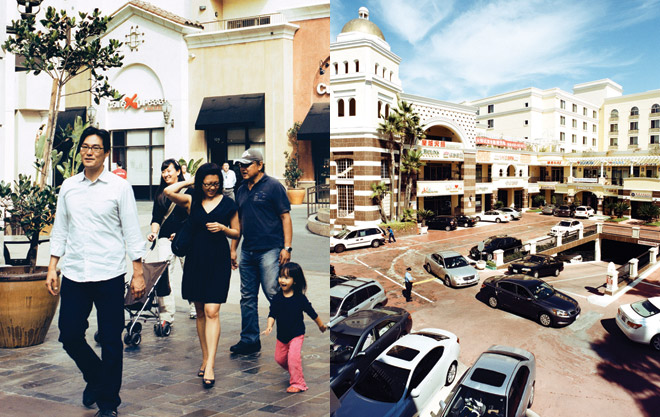 Nearly 25 years ago the Riviera Country Club, a golfing institution emblematic of L.A. wealth and celebrity, was sold to a group of Japanese investors for $108 million. Calling the transaction “un-American,” stunned members envisioned sushi bars near the sand traps and karaoke lounges dominating the classic Mediterranean-style clubhouse. They weren’t merely peeved about Riviera—for much of the 1980s and early ’90s Japanese investors loaded with cash had been snapping up trophy properties throughout the United States. They bought Rockefeller Center in New York, Arco Plaza in downtown Los Angeles, and MCA Incorporated, parent company of Universal Pictures. In a single year Japanese interests purchased $6 billion worth of American real estate.

These days the money has been coming from China, and the picture is more complicated. After a spectacular decade of economic growth, China has 1 million millionaires, along with roughly 100 billionaires (the United States has more than 400), and a good number of them have chosen Southern California as a place to do business and establish residency. In a few cases the spenders resemble out-of-control lottery winners—eight-figure mansions in Bel-Air, daily shopping sprees on Rodeo Drive—but most are far less conspicuous. At the corner of Olympic Boulevard and Francisco Street in downtown L.A., steps from L.A. Live and Staples Center, a 377-room Marriott Hotel is under construction, funded in large part by more than a hundred Chinese investors who shelled out $500,000 each. With U.S. banks reluctant to offer construction financing, this group effectively saved the day for developers—and unlike the furor over 1988’s Riviera purchase, no one is objecting. Then again, not many folks know it’s happening.

“The people and the companies that have been very successful in China are starting to diversify their holdings,” says Alan Chu, China Business Services Leader in the Los Angeles office of PricewaterhouseCoopers. California has seen $1.3 billion in Chinese investment deals between 2000 and 2011, according to one study, including $560 million last year alone. The purchases say a lot about the depth and diversity of the state and regional economies: from a small solar panel company in the City of Industry to the special effects powerhouse Digital Domain in Venice to offices and retail centers and warehouses throughout L.A. But the Chinese are not only investing in America; they’re becoming part of America. A total of 401,000 Chinese tourists visited California in 2010 (the latest numbers available), a 49 percent jump from the year before. Of that number, seven out of ten came to Los Angeles County, and they weren’t here simply to see the sights. The Chinese are the second-largest foreign buyers of residential real estate in the region, behind Canadians, according to the National Association of Realtors.

In some ways the wealthy Chinese are simply hedging their bets. (The expression “Don’t put all your eggs in one basket” is believed to have originated as a Chinese proverb.) China’s quasi-capitalistic system remains highly dependent on the country’s Communist party (state-run enterprises control half the nation’s economy), so you can be wealthy and still have concerns that one day government officials will change the rules. Backroom political skirmishes in recent months have intensified those concerns, as have China’s slowing economic growth, falling real estate market, contentious relations with U.S. officials over alleged espionage (China denies that any spying has taken place), and simmering labor unrest (workers at Foxconn, the factory that makes iPhones, have walked off their jobs on at least two occasions recently). “The U.S. has always been considered a sort of safe haven, and we’ve seen a bit of a spike because of perceived instability in China,” says Thomas Loo, an attorney at the L.A. office of Greenberg Traurig who works with Chinese businesspeople wanting to establish residency in this country.

You can also add quality of life to the mix. Not to be churlish, but China isn’t exactly a garden spot, what with its filthy air, questionable food safety, inexplicable regulations, high taxes, a rigidly controlled education system, and extremely dense communities. In a Gallup Wellbeing survey of consumer sentiment in nations around the world, 73 percent of Chinese respondents described themselves as “struggling,” while 11 percent said they were “suffering.” Only 16 percent thought of themselves as “thriving.” To be fair, these are generalizations; not everyone is as miserable as the numbers would suggest. In fact, a growing number of graduate students who come to the United States for their advanced degrees are returning to China because of better job prospects. But what’s undeniable is the lure to live here, particularly in Southern California, where Chinese Americans make up a huge part of the population. “People in China have kinship ties with people in the United States who have permanent residency. That blurring is what has made Los Angeles so attractive,” says Edward Park, director of the Asian Pacific American Studies program at Loyola Marymount University.

The biggest draw, aside from financial considerations, is education, and not only at the college level. Pre-university enrollment outside China has jumped an estimated 30 percent in the last few years. Some of this has to do with parents wanting to immerse their kids in English at an early age, and some of it stems from the belief that American high schools provide a better chance of getting into a quality university. (China’s dreaded gaokao college entrance exam, a kind of SAT on steroids, is faulted for emphasizing rote knowledge.) It’s not unusual for a Chinese entrepreneur to establish operations in the United States—or invest in a U.S. business—for the purpose of living here at least a few years. Communities with the best school districts, such as San Marino, Beverly Hills, and Arcadia, are among the most sought after—so much so that Southern California realtors offer special sections on their Web sites that describe properties catering to Chinese sensibilities. One 23-year-old Chinese student from USC paid $800,000 for a condominium at the Ritz-Carlton tower in downtown L.A., telling The Wall Street Journal that he wasn’t keen on student housing.

The Chinese experience in the United States has been long and often tortured. Merchants and sailors began arriving in the 1840s as part of the California gold rush, and a few years later Chinese laborers became the primary workforce for construction of the Central Pacific Railroad. They were mostly young men who planned on staying only a few years; long-term residency became problematic because of the nation’s racist and discriminatory attitudes (the 1871 massacre in L.A.’s Chinatown resulted in at least 18 deaths). A series of laws in 1917 and 1924 greatly reduced the number of Chinese in the United States. Only after the Immigration and Nationality Act was revised in 1965 did the numbers begin to increase. Immigration grew further after President Richard Nixon’s visit to China in 1972 (“The week that changed the world,” he would later call it) and a 1978 agreement with Chinese officials that allowed students to attend American universities.

Today the L.A. area is home to 250,000 people who were born in China, many of them concentrated in the San Gabriel Valley. That’s where you’ll find giant new developments like Monterey Park’s Atlantic Times Square mall, which features 200-plus high-end condominiums, along with dozens of restaurants and shops in an open-air layout—quite a contrast to the often dreary shopping centers along Atlantic Boulevard. Some 62,000 businesses in L.A. County are Chinese owned—no other place in the nation has more. “The newly arrived Chinese are one segment of this much larger community,” says Michael Woo, a former L.A. city councilman and now dean of the College of Environmental Design at Cal Poly Pomona. “I consider them to be a separate and discrete group, partly because of their lack of familiarity with American culture and also their perception of the world and their perception of America.”

When two very different business cultures come together for the first time, you can expect trouble. Unlike the more experienced Japanese, who acquired properties through sophisticated corporations and investment groups, Chinese entrepreneurs are frequently clueless about the basics of buying a company in the United States—including even the need to hire an attorney. “Most of them figure they can do it themselves,” says Dong Chen, who teaches international business at Loyola Marymount. “In China it doesn’t matter so much what the rules are but who you know” (that helps explain how the $50,000-a-year limit on moving cash out of China is routinely violated). Another mistake is when a buyer makes promises that he doesn’t plan to keep. A verbal offer of $1,000 might really mean $700. “They try to use the Chinese way of doing business,” says Andrew Pan, senior vice president of China Business Banking at Pasadena-based East West Bank. “In China it’s easy to promise this and that, even though they might not really mean it.”

To bridge the divide, some are turning to consultants, business brokers, and developers. Helping Chinese businesspeople get green cards has become something of a cottage industry. Among the more popular ways is the federal government’s EB-5 immigration program, under which foreign nationals invest $1 million in an American company or real estate development that creates or preserves at least ten jobs (the amount falls to $500,000 for investments in high-unemployment areas). Although Congress first passed the program in 1990, participation was minimal because of a complicated application process and lengthy adjudication periods. Several years ago Congress loosened the mechanism by permitting the creation of privately owned “regional centers” (essentially investment firms) that allow money to be pooled, thus opening up larger business opportunities. Last year the United States issued 3,710 visas to Chinese investors—by far the most of any nation. The deal for the downtown Marriott, which is located in what’s called a high-unemployment zone, was financed through the EB-5 system. A Seattle-based regional center called American Life brought the parties together.

EB-5 hasn’t been problem free. It was all but suspended between 1998 and 2003 because of various abuses, such as investors offering but never delivering the money and developers taking cash without building the project. Procedures have been tightened—EB-5 investors, for example, are now required to submit their money in advance of applying for a visa. Still, The New York Times reported last year that developers had used gerrymandering techniques—mostly by combining a high- and low-income census tract—to create the high-unemployment zones that require only a $500,000 investment.

Not that you’re hearing many complaints. After all, Chinese dollars have become a restorative for the American and Southern California economies—far more than the trophy purchases by Japanese investors (many sold out and took sizable losses after the 1991 recession, though the Riviera Country Club remains in Japanese hands). “We live in a globalized economy,” says Loyola’s Chen, who typifies the opening up of financial and economic borders. After going to graduate school at Rutgers University in 1999 and later moving to L.A., he settled in with his wife, who is an accountant, and their young child. But if there’s an opportunity in China, Chen says he wouldn’t rule out going back. “I don’t feel like I have to stay in one country forever,” he tells me. “I want to explore different places.” Giving economic incentives for people like Chen to stick around is one more reason why L.A. will have to play it smart in the years to come.