Home Crime Burn Notice: How Serial Arsonists are Snuffed Out in L.A. 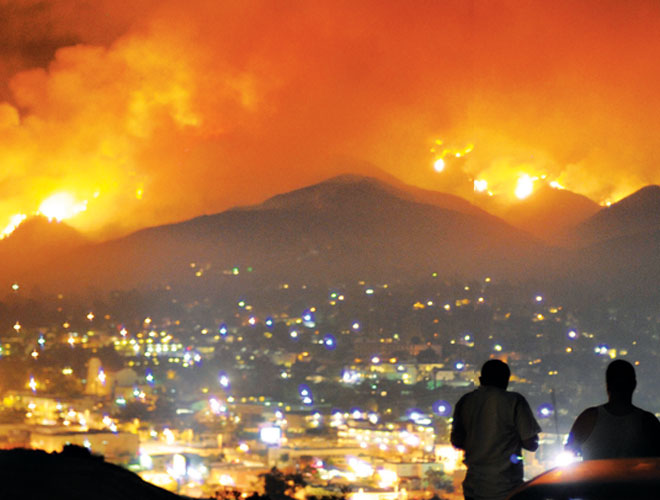 Watching the Station Fire from Tujunga in September 2009. An act of arson, the unsolved blaze killed two firefighters and burned 160,577 acres

Arson is the crime of malicious burning. There are various reasons why people set fires—rage, revenge, financial gain, to cover up a murder or a burglary, mental issues—but most arsonists feel powerless. Setting fire gives them a sense of power. You did this to me; look what I can do to you.

Serial arsonists are few and far between. They say there’s no stereotype, but the majority seem to be white males between, say, 16 and 35. I’ve read studies that say the reason more men are responsible for fires is because women are able to channel their fascination with fire through cooking. I don’t know if I agree, but I understand part of it because boys normally aren’t taught to cook. Their experience of fire is setting a campfire or using a magnifying glass to ignite the grass.

I’ve been a firefighter for 29 years; I drove the engine for 14, and I’ve been an arson investigator for 8. Lots of old crusty investigators/detectives will tell you that arson investigation is an art form. To most people something burned up just looks like something burned up, but every fire “speaks” to the investigator. Even the air in a charred building has a certain weight and feel and odor. That’s where we start—the burned remains of everything. We have more arson structure fires than arson brush fires, but the brush fires are more spectacular—for the arsonists, the citizens, and the firefighters. Los Angeles is a city like no other: 470 square miles in virtually the middle of a desert. With proper weather conditions, you can get a fire that burns from Hollywood to the ocean.

There are 16 arson investigators in the City of Los Angeles; I’m the only female. We work in pairs—two pairs on 24-hour duty every day. They call us “fire cops.” I carry a .40-caliber handgun. There are times when the arsonist will return to the scene, like the 32-year-old male whose wife decided she preferred the woman next door. He set fire to the woman’s sofa, which lit up the whole house and threatened the block. He came back to admire his handiwork. We arrested him on the spot.

I’ve been on some horrific incidents, but the one that haunts me was the father who strapped his two children into their car seats and set fire to the car. It took seven years for the case to finally be adjudicated. When the arson case includes murder, the arson investigators are the only ones who can speak for the dead. And we never stop. When  I take an arsonist off the streets, I’m putting out more than one fire.

Unsolved Crimes: Rosa Tufts on Three That Got Away

March 2006
“After a fire is extinguished at an apartment in Mid Wilshire, three bodies are discovered. It appeared that one person had stabbed the others to death before dying of smoke inhalation, but we couldn’t prove it.”

May 2007
“A man leaves a mortgage loan company to start his own. His former boss, convinced he’s stealing business, tells him to close down. The man refuses, and his Northridge office is firebombed. After many failed attempts to interview the ex-boss, we surprise him at his office. He’s dressed like it’s 1977 with a Saturday Night Fever outfit, and there are Scarface posters on his walls. While we were pretty sure he was behind the fire, we couldn’t prove it.”

December 2011
“Someone breaks into a Van Nuys clothing warehouse, distributes gasoline, and ignites it, destroying much of the stock. The owner claims she has been doing millions in sales. But the warehouse is practically full, her receipts don’t show that kind of profit, and each time we speak to her husband, he gives us a different alibi. We suspected insurance fraud but lacked evidence.”