Home Animals Breaking Mews: This Map Tracks All of the Cat Pictures Taken in... 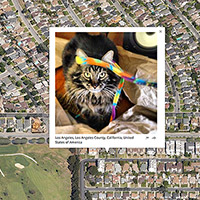 Hopefully you’re having a slow day at work, because the rest of it is about to be shot.

As if cats didn’t have enough Internet infamy, there is now a Web site called I Know Where Your Cat Lives, a data experiment that sources cat pictures from public photo-sharing sites and places them onto an interactive Google map. Depending on the type of person you are, this news will either ruin or make your entire life.

The site was created by Owen Mundy, an associate professor at Florida State University, who created IKWYCL to make a point about Internet privacy. Simply by searching the hashtag #cat on Facebook, Twitter, Instagram, Flickr, and other outlets, Mundy found 15 million images of furry felines across the globe. IKWYCL samples only one million of those: using the latitude and longitude coordinates embedded in the photos’s metadata, Mundy has pinpointed the location of the cats within 7.8 meters of their location at the time of the picture. Kind of creepy, but also kind of awesome.

According to a series of charts on the site, California is the cattiest state in the U.S. (we’ve got 43,739), and Los Angeles has the second highest population of felines (3,972) behind San Diego (4,735). Worldwide, L.A. lands at number eight behind New York, Sao Paulo, Singapore, Rio De Janeiro, Toronto, San Diego, and Paris.

If Mundy thought his project would make people think twice about catgramming, he was wrong, which is probably why he launched a Kickstarter campaign to cover the site’s hosting costs. Because privacy be damned! If the people want a map of cat pictures, they’ll have a map of cat pictures.