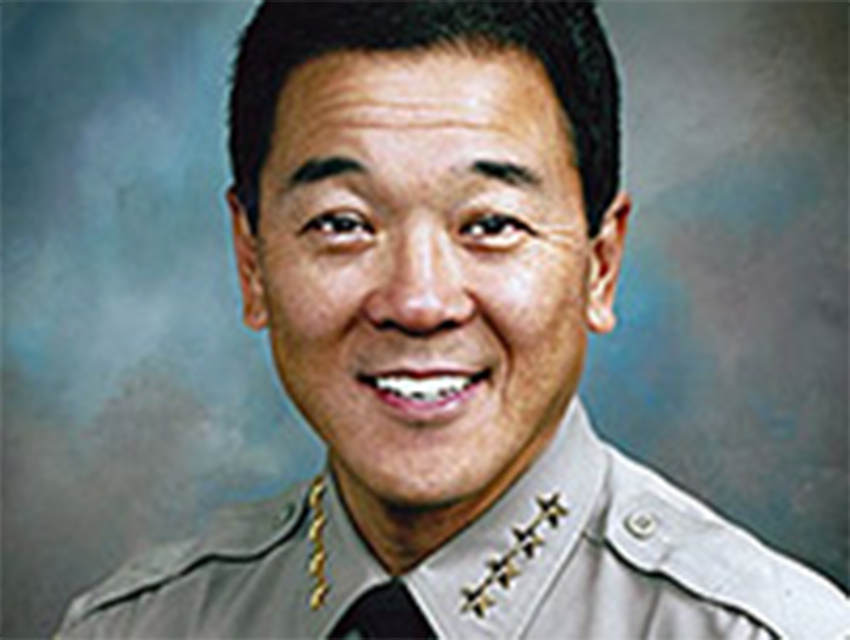 In the March issue of Los Angeles, Celeste Fremon details the jaw-dropping details about the breakdown in the Los Angeles Sheriff’s Department under the leadership of Sheriff Lee Baca. This June, L.A. County voters have an opportunity to cast their vote for a new sheriff and, hopefully, a new approach to policing within the LASD. You can’t complain if you don’t vote, but how to vote if you don’t know much about the candidates? Here, Fremon provides a rundown of each of the men who want to run the fourth largest police force in the country.

Patrick Gomez
A 31-year veteran of the department, retired lieutenant Pat Gomez has run against former sheriff Lee Baca twice before and was an early critic of the way the LASD treats the mentally ill in its jails. While Gomez doesn’t have the name recognition or fund-raising ability of the higher-profile candidates, he has an interesting history. Some years ago, Gomez sued the sheriff’s department for retaliation, alleging that, because he criticized the sheriff during the 2002 campaign, he was passed over for promotions and targeted by department officials, whom he says also harassed his kids and family. Rather than settle, the LASD took the case to court in 2010, bringing in a string of department witnesses to dispute Gomez’s claims. The federal jury believed Gomez and returned a unanimous verdict in his favor, after which the county agreed to a $950,000 payout. As it happens, Gomez’s claims have since been strengthened by the a still-expanding list of department members, many of them supervisors, who have also sued the LASD for retaliation, alleging their attempts to report wrongdoing resulted in workplace reprisals from higher-ups.

If elected, Gomez says, he will “restore confidence in the Los Angeles Sheriff’s Department by putting an end to the cover-ups, corruption, cronyism, and nepotism.” He is also strongly in favor of a rigorous forensic audit of the LASD’s finances. While he is not widely known, some election watchers say that Gomez could pull in a healthy slice of the county’s Latino vote that previously went to Baca. James Hellmold
Jim Hellmold is one of the LASD’s four assistant sheriffs and a Lee Baca protégé. In December 2012, when Baca became disenchanted with then-undersheriff Paul Tanaka, the man originally slated as his successor, Hellmold was one of two who Baca reportedly mentioned as his new heirs apparent. As assistant sheriff, Hellmold commands all of the department’s patrol and detective divisions, and says that much of his quarter century on the force has been spent on the front lines. “I’m not a politician, I’m a crime fighter,” is one of his campaign mottos and also the first thing he told reporters when on the day Baca announced his retirement. Although endorsed by the former sheriff, Hellmold emphasizes that he is “not Lee Baca.” Yet Baca is reportedly shoving some of his high-ticket campaign supporters in Hellmold’s direction.

Hellmold has been praised for his role on a special task force assigned to implement post-scandal changes in the county’s troubled jail system. He has been criticized for his reluctance to talk candidly about the department’s most notorious difficulties. Hellmold is mediagenic, puts a strong emphasis on community relations, and speaks with pride about his 25 years as a coach of youth football and baseball. His stated goals are short on specifics, yet he has taken the step to publically refuse any campaign donations from department members. Among his supporters are civil rights attorney Connie Rice and much-honored Watt’s community organizer Sweet Alice Harris. James McDonnell
Long Beach Chief of Police Jim McDonnell arguably has the strongest résumé of anyone running. He also can claim the highest profile list of endorsements. Those endorsing McDonnell include L.A. District Attorney Jackie Lacey, L.A. City Attorney Mike Feuer, LAPD Chief Charlie Beck, and State Senator Ted Lieu. What remains to be seen is whether the voters will regard McDonnell’s outsider status as a liability or an advantage. Before he became the chief of the Long Beach PD, McDonnell spent 29 years at the LAPD, rising to assistant chief, the second in command under former chief Bill Bratton. Twice shortlisted to head the LAPD (losing to Bratton, then Charlie Beck), McDonnell is experienced with the politician/lobbyist side of the sheriff’s job, having served on a series of statewide and national criminal justice commissions, task forces, and boards. He was also one of the seven members of the Citizens Commission on Jail Violence, so he is conversant with the worst of the department’s problems.

Because McDonnell did not come up through the LASD ranks, his grasp of the nuts and bolts of the agency may be less comprehensive than that possessed by some of the other candidates. But his supporters dismiss this criticism. Although he has the personal style of a genial Irish cop and is well liked by LAPD’s rank and file, McDonnell is a big-picture guy who has taught graduate courses in public administration at UCLA’s Luskin School of Public Affairs. It was his thoughtful community-policing plan that Bratton adopted when the latter came to L.A. to remake the LAPD. Robert Olmsted
A 32-plus-year veteran of the LASD, retired commander Bob Olmsted has become best known for his actions as a whistleblower. After a distinguished career in the department, he left in the fall of 2010 following his wife’s death but continued to try to push Baca to clean up what Olmsted saw as a deepening disaster in the county’s jail system. Subsequent to the Christmas party brawl between deputies in December 2010 I write about in the story, he says he tried one more time to warn his former boss that members of the LASD’s command staff were systematically derailing attempts at reform. When Baca again brushed off any concerns, Olmsted went to the FBI and eventually to the press. Since he had served as the commander of the LASD’s most troubled facilities, he came armed with plenty of documents and details.

While inexperienced in hardball politics, Olmsted is the only one of the seven candidates who has committed to a multi-point post-election platform. His “Pathway to Reform” covers topics such as jail violence, ethics, modern crime fighting, realignment, and recidivism. His chapter on “fiscal responsibility” includes a plan to examine why the LASD is such a lawsuit factory.

Along with teaching criminal justice for more than 20 years at El Camino College, Olmsted has worked in many of the department’s key divisions: detectives, narcotics, commercial crimes, training, custody, leadership, and custody. Law enforcement is in his DNA, he says. “My father served as a Lieutenant in the LASD before me. Now, I want to reform the department so that I can help ensure that my son, Michael…is able to join a department he is proud of.” Todd Rogers
Todd Rogers is the other LASD assistant sheriff hoping to lead the department. Although he is one of two candidates endorsed by former sheriff Lee Baca on the day Baca announced his exit, Rogers has not hesitated to be critical of the agency he serves, which he describes as having been damaged by a “catastrophic failure of leadership.” Rogers promises to reboot the LASD’s much-criticized hiring policies, says he will demand “strict accountability throughout the chain of command,” and calls for various changes aimed at “treating inmates humanely,” including a specialized mental health and drug treatment facility in the jails. “We will not violate the law to enforce the law,” he says crisply.

Like Paul Tanaka, Rogers already has held political office, having been elected to four terms on the Lakewood City Council and two terms as Lakewood’s mayor. When speaking at campaign events, he projects an amiable polish and is endorsed by a list of local office holders.

Rogers has a master’s in sociology and oversees the agency’s $2.8 billion budget, personnel operations, and the training academy. Yet his passion is most evident on the topic of community policing. He takes pride in having implemented a “community-based intervention strategy” at the LASD’s Carson station, which he says provided innovative drug and gang diversion programs for at risk youth. “It’s a community values-based approach to crime prevention that I will implement across the LASD,” Rogers says. Paul Tanaka
Former undersheriff Paul Tanaka has one of the most recognizable names among the candidates. But although he has been featured in the media more often the other sheriff hopefuls, much of his press—and this excludes my own story in this magazine—has been critical. There was, for example, the slew of stories that showed up after the Citizen’s Commission on Jail Violence issued its report and described what it called Tanaka’s “troubling role” in the whole jails mess.

Next to McDonnell, Tanaka has the most notable list of endorsements, among them an array of mayors and council people from small cities in the county, plus sheriffs of such California counties as Alameda, Santa Barbara, Nevada, and Mendocino. Within the sheriff’s department, too, Tanaka has sizable clusters of loyal supporters who could prove valuable in the day-to-day rigors of campaigning. At a candidates forum held Wednesday, February 19, by the department’s main union, the Association for Los Angeles Deputy Sheriffs, attendance was limited to union members, and Tanaka acolytes were by far the most numerous and the most vocal. It helped that, for weeks prior to the event, friends of Tanaka’s campaign repeatedly urged those sympathetic to Tanaka to show up, in some cases providing transportation.

Tanaka’s pitch as to why he is the one to lead the county’s embattled department mostly focuses on what he calls a return to basics, “which is to fight crime, take the criminals to jail, and make every community safer,” he says. “That’s why I’m running for sheriff.” Lou Vince
LAPD Detective Lou Vince is a former Marine with a master’s in criminology from UC Irvine. When Vince, who spent four years as an LASD reserve deputy, jumped into the race roughly a year ago, Lee Baca looked unbeatable. With little name recognition even inside the LAPD, Vince began doing guest posts on local blogs and became a lively presence on Twitter, where he posted daily about LASD-related issues: “Supes giv Sheriff 22m for mismanagement? Stop throwing $ at the prob + toss the prob!”

With Baca is out and six more candidates in, Vince remains an indefatigable if still minor player, challenging candidates via social media to move in a more progressive direction. In his platform, he states he wants to make Los Angeles County residents safer by employing “modern crime fighting strategies” like predictive policing and some of the newest computer-aided statistical models (with which the LAPD has had some notable success). When it comes to the county’s jails, Vince would like to see “alternative sentencing” strategies to address the problem of overcrowding, while still holding offenders “fully accountable.”

Vince’s detailed criticism of department policy has gotten him a handful of endorsements, most recently the Progressive Democrats of the Santa Monica Mountains. “Nothing less than the future of one of the finest law enforcement agencies in the world and the trust of the public is at stake,” he says of the sheriff’s race.