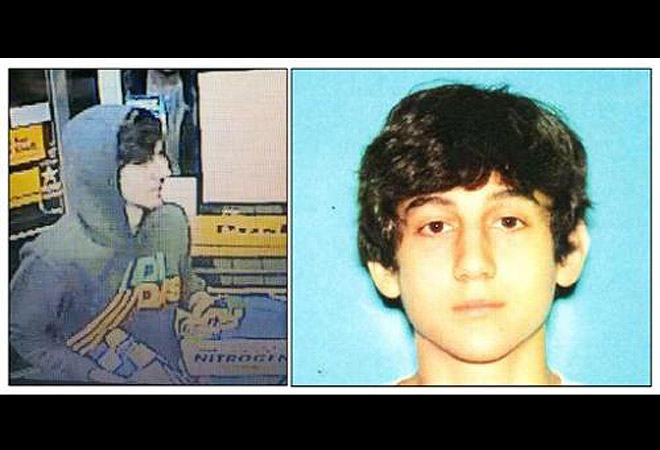 The FBI released a photo yesterday of Boston Marathon Bombing “Suspect #1” and “Suspect #2.” An atmosphere of chaos remains today after a heated firefight early this morning, which left Suspect #1 dead. Here’s what we know:

UPDATE 4/19/13, 5:59 p.m.: According to The Boston Globe, Dzhokhar A. Tsarnaev has been taken into custody after a day-long dragnet. He is alive.

-Suspect #1 has been identified as Tamerlan Tsarnaev, 26. Suspect #2 is his brother, Dzhokhar A. Tsarnaev, 19. They are from southern Russia, near Chechnya.

-Early this morning, the brothers robbed a 7-Eleven, carjacked a Mercedes SUV at gunpoint, and threw explosives at authorities. With a bomb strapped to his chest, Tamerlan ran at a group of officers and was killed. Dzhokhar is still at large.

-The two brothers are also responsible for the death of MIT officer Sean Collier, 26, and for shooting transit police officer Richard H. Donahue Jr., 33, who is in stable condition.

-Police believe that Dzhokhar is holed up in Watertown, MD. The area and its surrounding communities have been locked down, with police, SWAT, and FBI teams searching door to door for the suspect.

-The Massachusetts Bay Transit Authority has suspended all operations until Dzhokhar has been apprehended.

-The brothers are believed to be terrorists. Boston Police Commissioner Edward F. Davis told reporters early this morning, “We believe this to be a man here to kill people.”

-Tamerlan and Dzhokhar’s father, Anzor Tsarnaev, implored his sons to “give up’ after their involvement had been confirmed. He spoke to them just yesterday.

-Anzor threatened the U.S. in remarks to ABC News. “If they killed him [Dzhokhar], then all hell would break loose,” he warned. The ABC reporter who conducted the interview suggested that it “may have just been emotion speaking.”

The Boston Globe, Fox, and The New York Times can provide more information and live updates on the manhunt for the remaining Boston Bombing suspect.

Boston Bombing UPDATE: What We Know