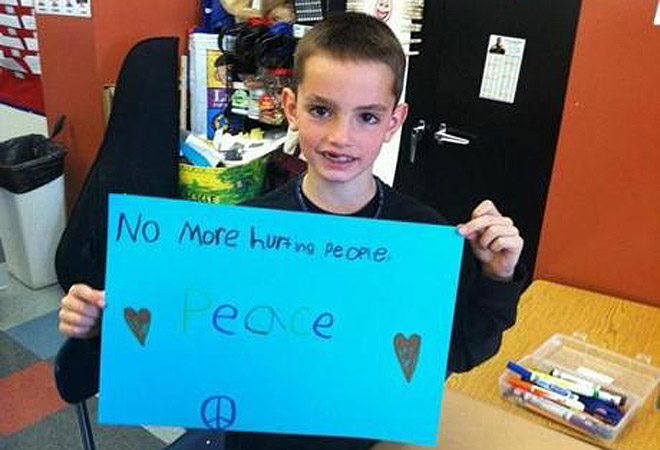 The ongoing investigation of the Boston Marathon bombings has officially been taken over by the FBI. Though no one has been taken into custody and motives remain unclear, there have been some updates on the blasts:

UPDATE 4/18/13: The FBI has released this photograph of two suspects in the bombing and is calling on the public for help identifying the men: -L.A. mayoral candidates Eric Garcetti and Wendy Greuel have suspended their campaigns in light of the bombings, though the respite is not expected to last long.

-In addition to 8-year-old Martin Richard (pictured above), the name of a second person who died was released today: Krystle Campbell, 29, of Arlington.

-A circuit board that is believed to have been used as a detonator has been found near the site of the blasts.

-The bombs were amateur, consisting of two six-liter pressure cookers packed with nails, metal and ball bearings. They were placed in black duffel bags.

-President Obama made another statement regarding the attacks this morning. “…Given what we now know about what took place, the FBI is investigating it as an act of terrorism,” he said. “Any time bombs are used to target innocent civilians it is an act of terror…And clearly, we’re at the beginning of our investigation.”

-As of today, three people have died and 176 have been injured in the blasts. Seventeen of those 176 are still in critical condition.

-Doctors believe that certain objects–nails and metal fragments, for example–were intentionally placed inside of the bombs to inflict shrapnel wounds.

-Though rumors would suggest otherwise, no other explosive devices have been found in Boston aside from the original three.

-The marathon route had been swept twice by bomb technicians before the race began.

-Boston Police Commissioner Edward F. Davis has asked the public to send authorities photos or video from around the time of the blast, just before and after the bombs exploded. “Those are going to be critical,” he said.

-A tip led authorities to a home in Revere last night, looking at what the Revere Fire Department described as a “person of interest.’’ No arrests were reported, but officers left carrying a variety of bags.

If you or someone you know is trying to locate a person in Boston, Google has set up a Person Finder.

Boston Marathon Bombing UPDATE: One Suspect Dead, The Other Still At Large