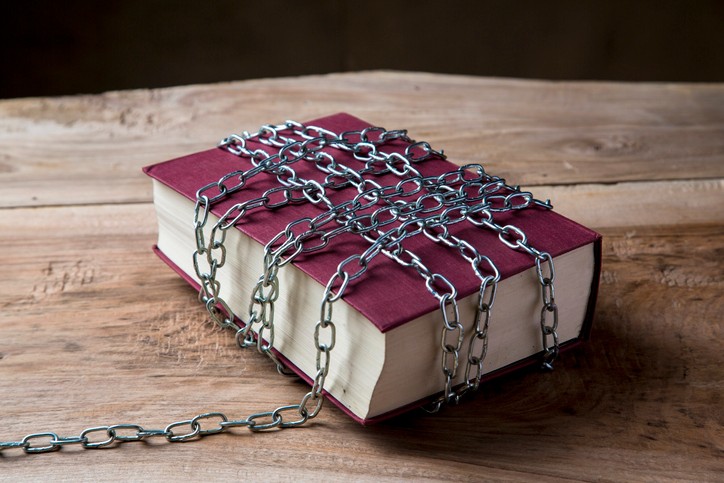 2532 book bans occurred in the 2021-2022 school year according to a new report from PEN America. At least half of the bans had advocacy groups playing a direct or influential role, most of which formed in the past year.

“We are caught in the middle of a political agenda by a small minority of groups,” Lessa Kanani’opua Pelayo-Lozada, President of the American Library Association (ALA) tells LAMag. The ALA released its own report based on 2021 preliminary data last Friday.

The bans were in 138 different school districts across 32 states, largely pertaining to content that contains LGBTQ+ characters or themes, characters of color, sexual content, and/or issues of race and racism.

“While we think of book bans as the work of individual concerned citizens, our report demonstrates that today’s wave of bans represents a coordinated campaign to banish books being waged by sophisticated, ideological and well-resourced advocacy organizations,” Suzanne Nossel, chief executive officer of PEN America said in a press release.

The advocacy groups named in the PEN America report include: Moms for Liberty, County Citizens Defending Freedom, Power2Parent, and No Left Turn in Education.

Although it’s often assumed that concerned parents issue complaints regarding school material, Nossel says this goes beyond the average parent and that advocacy groups are launching campaigns that far exceed “standard expressions of concern.”

“Parents and community members play an important role in shaping what students learn in school,” Nossel said. “But this goes far beyond organic expressions of concern or the normal give-and-take between parents and educators in a healthy school environment. These groups have made it their mission to undermine educators, sabotage students’ freedom to read and stoke divisive battles that distract from teaching and learning.”

For Pelayo-Lozada, advocating for all books isn’t about removing the rights of parents to have a say in their child’s education—it’s about preventing select parents or advocacy groups from setting the tone for all students. “We believe strongly that it is a parent’s right to decide what their family reads,” she said, maintaining that it’s important to make sure people aren’t “infringing your rights upon other families. Children need access—everyone needs access—to materials that can help them through tough issue.”

Pelayo-Lozada continued, “For the ALA, the freedom to read is not a political issue, it’s a constitutional right. So we’re providing access, we’re upholding the constitution.”

Books that were most commonly banned are: Gender Queer: A Memoir by Maia Kobabe, All Boys Aren’t Blue by George M. Johnson and Out of Darkness by Ashley Hope Perez.

The surge comes at a time when legislators around the country continue attempts to restrict, or outright ban certain topics within American schools. According to PEN America, 40 percent of the bans “are connected to political pressure of legislation,” and that 2022 saw a 250 percent increase in “educational gag order proposals.”

Most of the bans have occurred in conservative states such as Florida, which saw the “Don’t Say Gay” law take effect earlier this year. Left-leaning states, however, have had their own controversies surrounding the removal/ban of material from schools. Although the blue states don’t appear to ban to the same degree as their red neighbors, PEN America considers their restrictions to be under the same anti-thought umbrella.

“PEN America defines a school book ban as any action taken against a book based on its content and as a result of parent or community challenges, administrative decisions, or in response to direct or threatened action by lawmakers or other governmental officials, that leads to a previously accessible book being either completely removed from availability to students, or where access to a book is restricted or diminished. “

The Burbank Unified School District, in order to provide a more “anti-racist” curriculum, removed books from the curriculum including To Kill a Mockingbird by Harper Lee, The Adventures of Huckleberry Finn by Mark Twain, and Of Mice and Men by John Steinbeck in 2020. The books are still available for students to read independently. PEN America responded to a decision by the school district to ban against several books due to racist content and language.

“The sheer implications of your current policy are vast, especially as it implicates classic literature from the civil rights movement,” PEN America wrote at the time. “The policy appears to effectively ban dozens, if not hundreds, of works from classrooms, including works by numerous Black authors, critics, novelists, historians, poets, playwrights, and even songwriters.”

As attacks on literary works continue to increase, Nossel and Pelayo-Lozada warn of the lasting implications and the dangers to teachers and librarians—often the target of attacks and complaints—that the movement could have.

“Folks are using us as a lightning rod because we are a trusted source,” Pelayo-Lozada said of herself and fellow librarians. “And if folks can erode our trust and attack us, then they gain access to controlling what others read.”

According to Nossel, “This censorious movement is turning our public schools into political battlegrounds. Driving wedges within communities, forcing teachers and librarians from their jobs, and casting a chill over the spirit of open inquiry and intellectual freedom that underpin a flourishing democracy.”