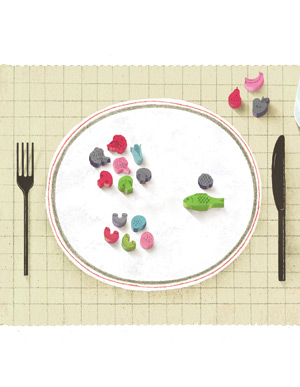 My friend and I were looking through her cupboard of vitamins, shelves full of supplements. I had asked her a casual question about how much calcium she takes, and with an amused glance she dragged me to her stash: neatly lined-up bottles of pills for every imaginable ailment, for every body part from brain to bones. We might as well have been at Whole Foods.

“This is the one you want,” she said, pointing to a giant container of calcium-magnesium softgels. “Make sure you get the one with D included, and take these at night. They have the added benefit of being great for regularity. Be careful, though. Don’t take more than three because you might…”

On she went, picking up one purported elixir after another, extolling their applications and virtues and carefully putting them back in their assigned positions.

“This is for your heart,” she said, brandishing CoQ10, “and this is your standard fish oil combo—make sure it has flaxseed, but you probably know that—and I always do some potassium because I don’t think any of us get enough of that and, for creaky joints, glucosamine, but that’s old hat by now.”

I finally stopped her. She is a very good friend. “Have you gone a bit nuts?” I asked.

“Probably,” she replied, “but at least I don’t bring them to lunch in little Baggies. I was having a meal with an old pal, and she suddenly pulled them out of her purse and swallowed a passel between courses. At least I’m not toting mine around in public.”

We laughed. The truth is, I stopped at Whole Foods on the way home and loaded up—just a couple, really, of the softgels (have to admit, she sold me on those) and the stuff for my heart, which has felt jittery of late, bouncing around in its thoracic cage. I ruminated about how many of my friends, primarily women, have gotten into this major-league health kick. I am not talking about eating well—more greens and grains and less meat, though everyone I know is currently pork-mad (but that’s another issue)—and getting a bit of exercise, and yes, probably popping a daily vitamin or two. Most of them have been doing that for some time, not in a maniacal fashion but in a nice, normal “I’d better take care of myself” way. In my tribe there have always been a handful of obsessives, the calorie counters and stomach crunchers and pulse takers, though until recently everyone has acted in moderation, if that makes sense, not indulging in frenzied physiological self-focus.

Now we seem to be on a collective hypochondria jag, inhaling vitamins and supplements and herbs and enzymes despite the lack of evidence of their efficacy. We are smart; we read the reports. Yet we shell out good money for bottle after bottle in a kind of “Hail Mary” pass to the gods of health. At my house we have certainly swallowed our share of ginkgo biloba since it’s been rumored to keep dementia at bay (this, as we are entering a period when names, including those of friends, are proving elusive). Even after checking the data and seeing that, alas, the famed ginkgo did not fend off the dreaded Alzheimer’s, we dutifully took it with a tall, hopeful glass of water. Similarly, we have tried and retried melatonin for sleep, and I am partial to a swig every now and again of a potion cheerfully called Bach Rescue Remedy. All these can now be found at almost any self-respecting mass-market pharmacy.

My husband is not immune from this trend, nor are his buddies, so I’m not singling out my female cohort. If I bring into the house a product of an alleged therapeutic nature, and it’s not gender specific—to be used for hot flashes, say—he will snag some. I have already caught him filching my softgels, and he, a longtime insomniac, will sample any of the herbal nighty-night aids. He has a supply of saw palmetto for prostate health and has been big on spirulina, a microscopic blue-green algae powder that he mixes into awful-looking drinks. Any perusal of the Internet will also show a veritable ton of male bodybuilding supplements, not to mention a cornucopia of sexual endurance enhancers, the natural analog to Viagra and sons (though these have not made it onto our personal shelves).

We appear to be chasing a fountain of youth, and it’s not only the old who are in pursuit. In a beauty-conscious place like Los Angeles, even the young women with Botox in their foreheads can tick off their cholesterol levels—the good kind and the bad (they know the fine points). “The problem,” a psychologist friend of mine said, “is that we have totally pathologized aging, turned it into a disease that needs to be beaten back with whatever you can get your hands on.” No need to let our bodies do their thing; no need to get old. Here, take this, and you will stay supple and alluring. That was the promise. “We see where that led,” she said.

Indeed we do. All that estrogen—once so eagerly prescribed by the medical establishment and promoted by the pharmaceutical companies—is now largely frowned on, implicated in an uptick in breast cancer. No wonder women are particularly off balance when it comes to their health. So many conflicting messages ricochet through the media, often financed by drug-pushing concerns. The hormone replacement therapy fiasco was the most glaring example of errant advice. But every day there seems to be a new injunction: Get a mammogram once a year after 40. No, wait until 50. No, go back to 40. Then there is the hard sell of the osteoporosis medications: Fosamax and Boniva, which a smiling Sally Field hawks with such effective earnestness. A lot of women I know are taking one or the other, including those with the less-serious osteopenia—a thinning of bone that pretty much happens to most postmenopausal women. Millions are now on the drugs, even though experts say that for many, such therapy is unnecessary, yet another decision for women to worry about.

Some mornings, when I go to scan my e-mails, what first pops up on my laptop is a blaring tease about a “definitive” new report telling me what to avoid or what not to miss, one that will be rehashed on every news show by any number of hip and telegenic young physicians who have become TV staples. Meanwhile we are supposed to be monitoring our skin like Sherlock Holmes. I confess I have been on the Web dozens of times studying skin cancer charts, those ugly little puckery bumps, to make sure that the tiny, freckly spot I have had since girlhood isn’t suddenly going to take me out.

That is, of course, the ultimate fear. We have watched loved ones die—not only parents, but contemporaries, too—and we are in frantic mode trying to dodge mortality. Every woman I know has lost a close relative or friend to breast cancer. We search for reasons for their afflictions, their deaths. If they had taken better care of themselves—less fat, less alcohol, more exercise, more veggies, and more of those fish oil tablets—maybe, just maybe, they could have avoided the big C. There is an automatic if primitive reflex to uncover a cause, an explanation; otherwise we are at the mercy of genes and fate, and that is an unnerving prospect. Preferable to have the illusion of control, a sense that we are mistresses (or masters) of our physical destinies, even if half the stuff we routinely consume—all those supplements—turn out to be placebos. So much is out of our hands: the environmental impact on our bodies of toxins in the air and water. The default position is to manage what we can.

Is there an upside to this accent on trying to stay well? Sure. Unless it becomes dying to stay well, which it clearly has for certain people. That’s the message in Live a Little! Breaking the Rules Won’t Break Your Health, the funny and wise new book from noted breast cancer expert Dr. Susan Love and her collaborators, Harvard psychologist Dr. Alice Domar and NBC’s Dr. Nancy Snyderman. These women take aim at the obsession. Relax, they say, stop driving yourself crazy and use a little common sense. The very stress over the state of your health will potentially make you unhealthy, because all that worry can affect your immune system. These author-doctors recommend we find a median point: Yes, eat reasonably well (you can have that pork from time to time), walk a few miles (you don’t have to run the marathon), get some sleep (seven hours a night is fine—optimal, in fact), have your mammogram every year (if you are over 50), and attempt not to take too seriously all that medical advice that comes rattling over the transom.

Chill out. Smell the roses. Partake of the small daily pleasures, lest you rob yourself of the joy of just being alive and on the earth. Time is too short to spend so many hours trying to prolong it.