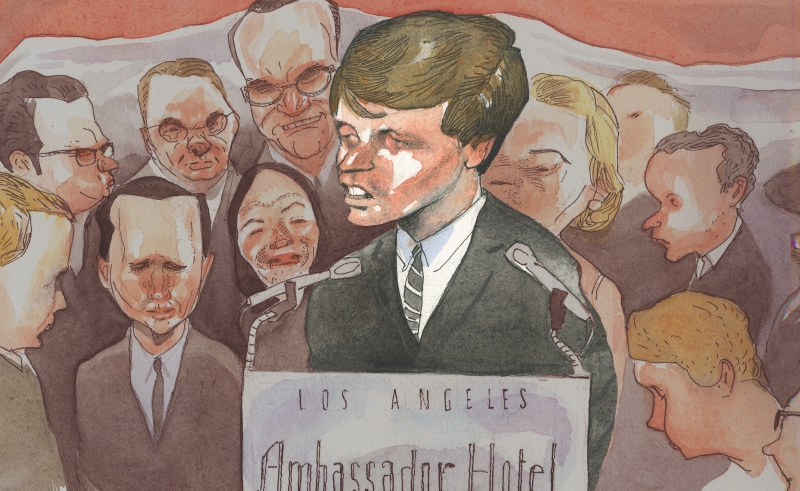 Amid the embers of the Vietnam War and John F. Kennedy’s assassination, Robert F. Kennedy’s 1968 run for the presidency played out with a leitmotif of gun violence from its first moments to his murder in Los Angeles. At a rally in Indianapolis on April 4, he informed the crowd of Dr. Martin Luther King Jr.’s assassination: “For those of you who are black and are tempted to be filled with hatred and mistrust of the injustice of such an act, against all white people, I would only say that I can also feel in my own heart the same kind of feeling. I had a member of my family killed, but he was killed by a white man. But we have to make an effort in the United States…to go beyond these rather difficult times.” Kennedy was known as a hard-boiled pol, but even before announcing his run he sought out the vulnerable and the poor—miners in Appalachia, factory workers in Indiana, farmworkers in Central California. Later he visited students in South L.A. The 42-year-old was connecting. “He had the capacity to open up himself. We saw him grow. We saw him change,” said congressman and civil rights leader John Lewis. The FBI had warned Kennedy that he was a target for assassination. As his motorcade rolled through San Francisco’s Chinatown, fireworks went of. Ethel Kennedy ducked down in the car, rattled; Bobby kept shaking hands as if nothing had happened. The campaign was taking its toll. Kennedy lost weight and the ability to grip a handshake; his vocal chords were strained. In San Diego, he cut a talk short and slumped down with exhaustion on the ramp from the stage, his head between his knees.

“Even in our sleep, pain which cannot forget falls drop by drop upon the heart—until in our own despair, against our will, comes wisdom, through the awful grace of God.” —Kennedy quoting Aeschylus

The New York senator and his family watched the returns of the June 4 California primary in their Ambassador Hotel suite on Wilshire. Around midnight Kennedy made his victory speech, expressing his conviction that we could end division in the United States. When Kennedy entered the hotel kitchen, Sirhan Sirhan, a Palestinian angry about the Six-Day War, shot him in the head and neck. Busboy Juan Romero knelt and placed rosary beads in the fallen Kennedy’s hand. “Everything’s going to be OK,” Kennedy said. He died at Good Samaritan Hospital 26 hours later. On June 8, the train bearing Kennedy’s body crept from New York to Washington, D.C., and then to Arlington National Cemetery in Virginia on a route lined with Americans of every color.

Kennedy may have been the last political figure who was able to bring poor whites and minorities together. A post-RFK America went on to elect Richard Nixon, whose weaponization of white resentment would have far-reaching ramifications in 2018.