Home Guest Column He Was Struck with Projectiles at a BLM Rally. He Says His... 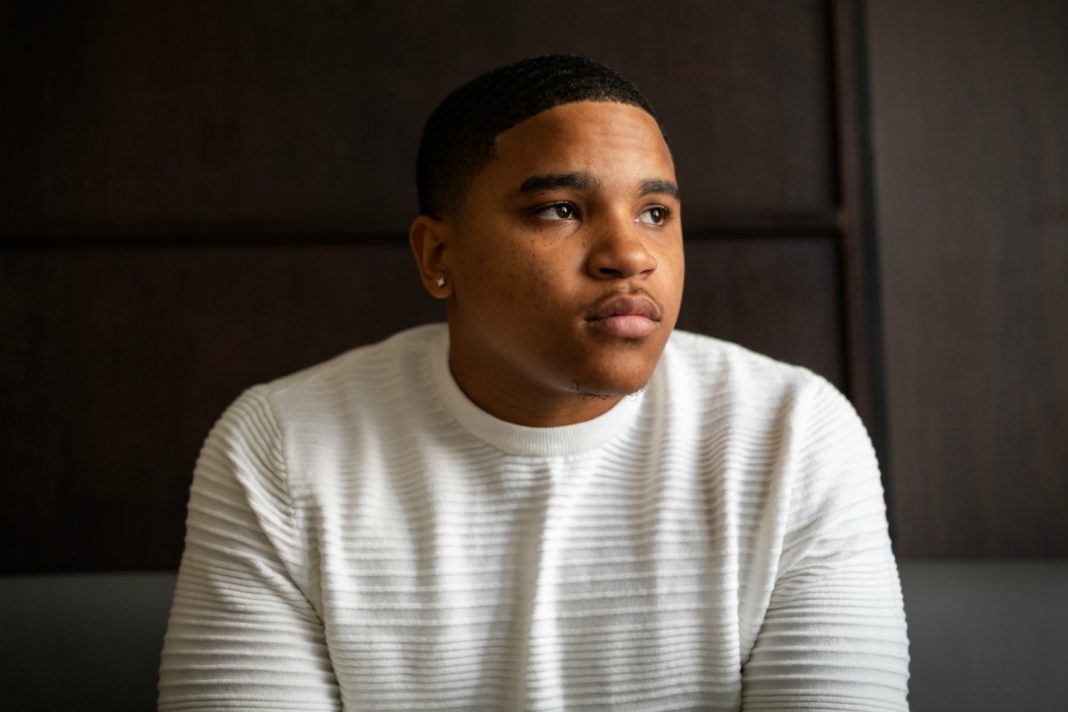 Coronavirus aside, one L.A. family is in for a super awkward Thanksgiving dinner—and not for the reasons we usually think of. Relatives of Jamal Shakir and Eric Anderson will have to figure out how to talk around, over, and under the fact that Shakir is accusing Anderson, his LAPD officer uncle, of being involved in a use of force incident at a recent Black Lives Matter protest.

I first heard about Shakir’s case from renowned trial attorney Carl Douglas, who specializes in police misconduct cases and is representing Shakir in his claim for damages, a precursor to a civil lawsuit. Douglas was impressed with the 23-year-old filmmaker and felt strongly that the young man’s story had to be told.

Prior to this year, Shakir had never participated in a protest. But on May 29, in the wake of George Floyd’s murder at the hands of Minneapolis police, he was drawn out of his sixth-floor Spring Street apartment by the energy pulsing through the streets of downtown Los Angeles, where thousands of people had gathered in support of the Black Lives Matter movement. In true Gen Z fashion, Shakir grabbed two phones—one for recording and one to keep talking to his friends on FaceTime—and went downstairs where he joined the crowd as it made its way north.

Just minutes after he joined the march, the joyful experience took a turn for the worse. As police officers attempted to corral the crowd, and as Shakir continued filming from what became the skirmish line, he spotted a familiar face behind a protective face shield: his LAPD officer uncle. Shakir called out to him.

Shakir didn’t go home. Instead he kept pressing his uncle: How could a Black man be on that side in the fight? What would Anderson’s father, Shakir’s grandfather, think about the officer’s role in the protests?

Shakir claims that’s when his uncle pointed his baton and directed one of the officers to shoot at him with a nonlethal projectile. A projectile hit Shakir’s hand, knocking his cellphone to the ground. Shakir says that when he bent over to pick it up, another projectile struck him in the buttocks. Scared and bleeding, Shakir rushed to the hospital, where he checked in under an alias, worried that police might be looking for him.

“Not one shot, but two shots,” Shakir claims. “I was definitely targeted.”

Last week, Shakir joined dozens of other protesters and organizations who’ve filed lawsuits and tort claims against the LAPD for use of force incidents during recent protests for social change. Shakir’s claim alleges that the city “failed to properly train Anderson and each of the involved police officers based on standards taught in the state mandated Peace Officers Standards and Training program on the alternative ways of dealing with peaceful protesters.”

Other protesters’ complaints have included charges that officers groped their breasts, “kettled” groups of protesters, arrested them and then left them in handcuffs for hours, and shot them with hard projectiles in the face, chest, hands, legs, and even the testicles.

What happened to Shakir isn’t necessarily unique, but the circumstances are.

“That Anderson would direct that his own nephew be shot twice even with rubber bullets, though he was peacefully protesting, should send chills through us all,” Douglas says of Shakir’s allegations. “It speaks volumes about how far we still have to go as citizens of this great city before seeing true reform.”

Douglas continues, “Never in my 40 years as a civil rights lawyer have I ever encountered so stark a tragedy as a police officer using excessive force against his own blood.” Officer Anderson didn’t respond to a request to comment on this story.

Like many Black men his age, Shakir has already been heavily impacted by the criminal justice system. Both his mother and father are imprisoned for their alleged involvement in the Rollin’ 90s Neighborhood Crips, his father as a drug kingpin, his mother as a coconspirator. Both were given lengthy prison sentences, and Jamal was raised by his grandmother and aunt as a result. His father, Jamal Shakir Sr., also known as “Donut,” escaped a death sentence and received 16 life sentences to be followed by an additional nine consecutive life sentences for allegedly orchestrating nine murders along with other criminal conduct while running a criminal enterprise the Feds said stretched from Los Angeles to Tennessee. His mother, Lameisha Anderson, is due to be released from prison in 2021.

Kelviana James, Shakir’s cousin, watched the events of the protest unfold live on Instagram from Alabama. “I called my mom in Georgia but she didn’t answer so I called my grandma who also lives in Georgia. We called my grandpa in Los Angeles, Eric’s father,” she says. “We were just trying to figure out what was going on with Jamal. We couldn’t reach Jamal because I guess he was in the middle of trying to get away. When we finally talked to him and [he told us] it was Eric, my family couldn’t believe it. My grandpa was trying to figure out why he would do that to his grandson knowing that’s his family member.”

In typical LAPD fashion, the department declined to comment on the pending litigation. As for Shakir, he’s trying to get on with his life. He says that three fingers on his right hand still aren’t working properly, making it extremely difficult for him to write or type. He’ll be going to physical therapy for the foreseeable future.

There’s been no word from Uncle Eric on if he plans on making an appearance at his family’s Thanksgiving dinner this year. If he does, there’s certain to be an elephant in the room. You know what they say about Thanksgiving with Black families—the best food ever and never a dull moment.

Jasmyne A. Cannick writes and talks about the collisions at the intersection of race and politics and other social issues. Find more from her at iamjasmyne.com.