Home Books They Held on Through the Pandemic, and Now L.A.’s Black-Owned Bookstores Are... 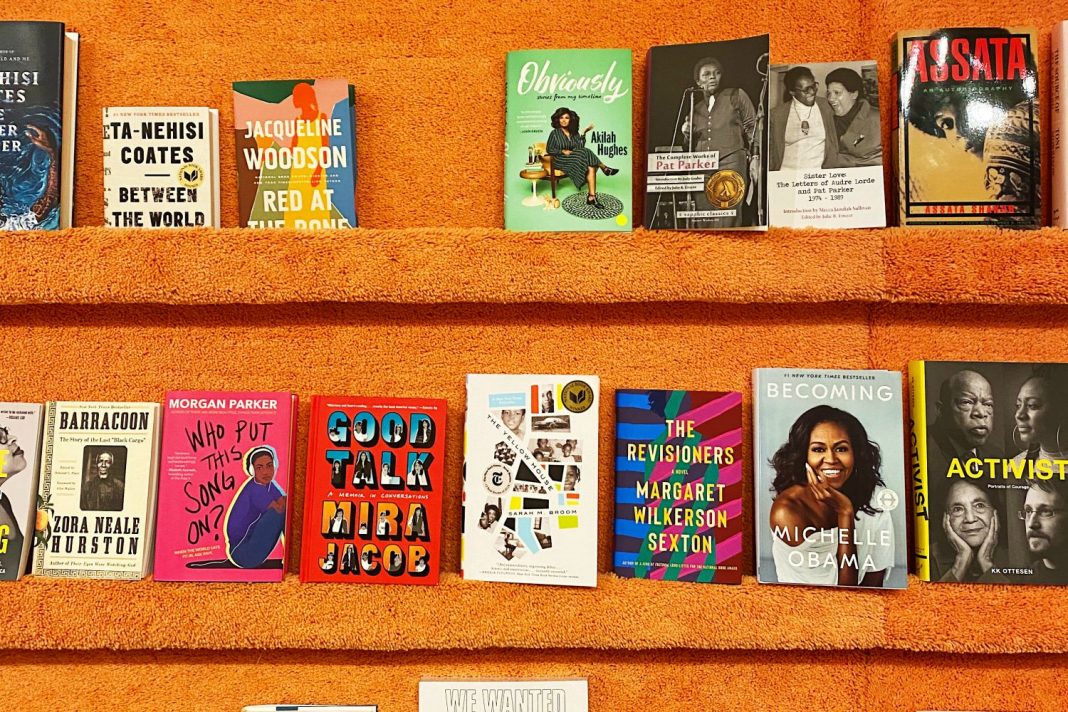 These days, it’s a family affair at Reparations Club, a bookstore, community space, and marketplace of Black and brown creativity located in Mid-City.

“I’ve had to call in everyone to help pack orders, from my grandmother, my nephews, my husband, friends from all over the place,” said Jazzi McGilbert, who founded Rep Club last June. “We’ve had to get all hands on deck.”

Black booksellers across the nation are scrambling to keep up with a sudden influx of sales, sparked by the national outrage over the murders of George Floyd and Breonna Taylor at the hands of law enforcement. Antiracist reading lists have circulated extensively on social media as a starting point for white Americans to examine their own guilt and complicity. Books like Ibram X. Kendi’s How To Be an Antiracist and Robin DiAngelo’s White Fragility are flying off the shelves.

At the same time, a newfound awareness of the importance of buying from Black-owned businesses is spreading, and many folks, reluctant to contribute another dollar to Jeff Bezos’s $152 billion fortune, are turning to Black-owned bookstores to help check off the titles on their racial justice syllabi. We stopped by three black-owned bookstores to see how the national reckoning has been for business.

Reparations Club offers an eclectic array of products, including books, selections from McGilbert’s father’s record collection, baby hair brushes, and barbecue sauce—the only rule is that everything in the store be made by Black people and other people of color.

For years, McGilbert hustled in the fashion editorial world as a Teen Vogue contributing editor, NYLON magazine’s digital editor, and more. After that, she worked as a freelance stylist and creative director, and ultimately put her talents to work creating Rep Club after her mother passed away.

“I’ve heard from other friends who have lost parents that you sort of have a grief baby, and that takes different forms. For me, I just needed something to call my own,” McGilbert says. “I think whether it was conscious or not, it was a response to me feeling out of place everywhere, whether I was in the fashion industry or in this motherhood world that I was briefly in. As a queer black woman in America, there just weren’t enough spaces where I felt prioritized and comfortable.”

“It’s bittersweet, because it took loss of life and Black trauma to get to this point.”

McGilbert hadn’t planned on launching an online store, but then COVID-19 hit, forcing Rep Club to shut its doors. Now she’s seeing sales come in from every state in the country and even from around the world. The increase in business was so great that McGilbert had to turn the notifications off on her phone to get some sleep.

The biggest take away from all of this? “Diversify your dollars,” McGilbert says. After just seven days of people making a conscious choice about where to spend their money, McGilbert has been able to keep her business open, hire more employees, and get important books into more peoples’ hands. “I don’t know what tiny percentage this is of white people who decided to spend their dollars with us, and it’s completely transformed things. The more people that do that, the more impact it’s going to have,” said McGilbert. “It’s a little bittersweet, because it took loss of life and Black trauma to get to this point. It’s a challenging thing to balance and try to make sense of, but I know this seems like the first time in a long time that the Black people and Black women in my life have felt supported by someone other than ourselves and heard by someone other than ourselves.”

McGilbert’s Book Recommendations: The Fire Next Time by James Baldwin, or anything by Octavia Butler or N.K. Jemisin

Malik Muhammad opened Malik Books in 1990, a few years after he graduated from USC, with the mission of making a difference in his community on a grassroots level. The shop, which is currently in the Baldwin Hills Crenshaw Plaza, sells books, calendars, and gifts that speak to the experiences of the African diaspora.

“When I came across certain literature, I know it increased my self-esteem, my self-worth, and it gave me a new perspective on our people and our community,” Muhammad says. “I like to think Malik Books is an African American community bookstore, but with an emphasis on giving voice to the voiceless.”

When Malik Books had to shut its doors due to the pandemic, the business was fortunate enough to have a web store in place. Then, almost overnight, Muhammad says their sales experienced a tremendous spike. The store has long been a staple in the Baldwin Hills-Crenshaw community, but now orders are pouring in from all over the country.

Muhammad is glad that these conversations are finally happening, even if they’re long overdue. “There’s an elephant in the room, and everybody’s walking by and nobody’s talking about it. Well, that has to stop,” he says. “This outrage is the result of systemic racism. We must dialogue if we are to have a meaningful relationship. This is one of the reasons why Malik Books opened up, because we wanted to address these issues.”

“When I came across certain literature, I know it increased my self-esteem, my self-worth, and it gave me a new perspective on our people and our community.”

Malik says he’s no stranger to racist policing. In one incident dating back to the 1990s, he was confronted by two white officers with their guns drawn as he was picking up his two-year-old son from daycare. They’d received a call that Muhammad was allegedly carrying a gun, and they told him to put his hands up. “I said, ‘I’ve got a baby, if I put my hands up he’s going to fall!’” Muhammad recalls. “They came with their weapons drawn, with a baby in my hands. I’ve never forgotten that.”

Over the past 30 years, Eso Won Books has achieved legendary status. The Leimert Park shop, which award-winning writer Ta-Nehisi Coates has said is his favorite bookstore in the country, has hosted the likes of Barack Obama, Maya Angelou, Spike Lee, Toni Morrison, and other icons.

At the beginning of the pandemic, co-owner James Fugate says their online store was receiving around 25 orders per day. Then, on May 31, the order count began going “up and up and up.” Sales poured in from all over the country, and even other bookstores offered to come help process the orders. Once the number hit 2,300, Fugate knew they’d have to shut the website down.

“We keep getting these knuckleheads that’ll come in that we know, and they’re like, ‘Look at all the white people! They’re trying to educate themselves!’” Fugate says with a chuckle. “For every single Black bookstore in the United States, it seems like I’m reading that they are overwhelmed and shocked by the amount of sales they’re getting. It’s nothing like I’ve ever seen in my entire life.”

That’s definitely saying something, because Fugate has had a long career in the book industry. Before opening Eso Won with business partner Tom Hamilton, he helped curate the book selections at college bookstores to include more Black authors.

“I do not think it’s just a moment. I think that the election of Trump in 2016 has made people realize how important it is to be involved.”

Fugate was first hired at Florida A&M University in Tallahassee, where they were having trouble getting general reading books to sell. He immediately recognized the problem: not enough Black books. “When I got to Florida on the first day, I told the guy, ‘Well the problem here is you don’t have the books that the people here want to read,’” Fugate recalls.

He then went on to expand the Black book selection at Compton College, before quitting his job in 1990 to focus on Eso Won full time.

Fugate is optimistic that this current energy will continue to be sustained after the immediate frenzy. “I do not think it’s just a moment. I think that the election of Trump in 2016 and then the last four years of him has made people realize how important it is to be involved,” he says. “Watch November—it will be very, very interesting. I think it may be the dawn of a younger generation getting more involved in politics. I think we’re going to have something happen, because this is so different from anything I’ve ever seen.”

Fugate’s Book Recommendations: Chokehold: Policing Black Men by Paul Butler and the Color of Law: A Forgotten History of How Our Government Segregated America by Richard Rothstein

RELATED: Satisfy Your Sweet Tooth at These 9 Black-Owned Bakeries