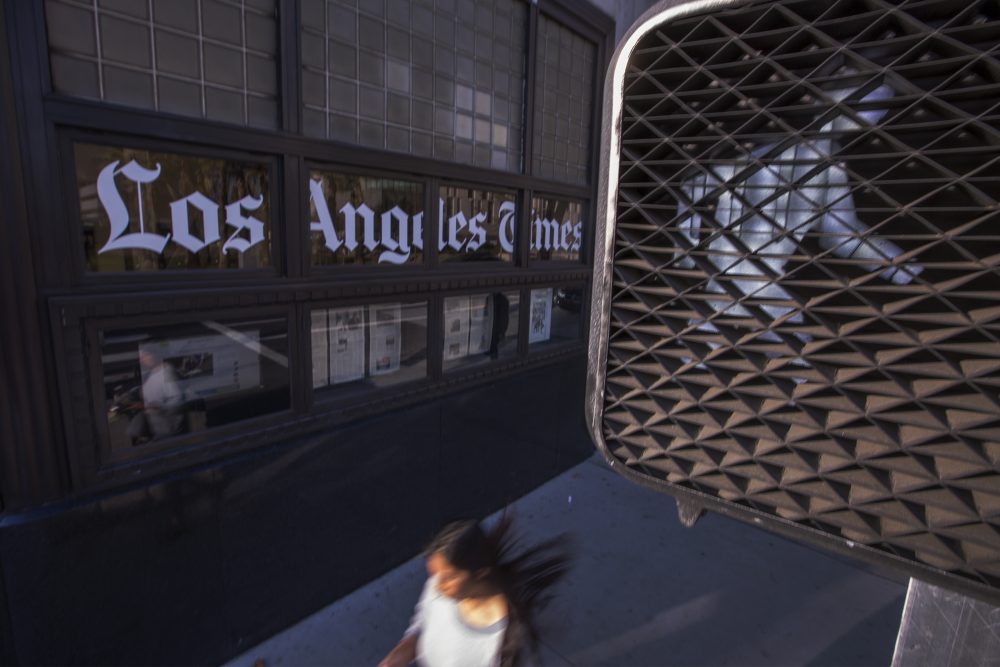 Black journalists at the Los Angeles Times are calling on leadership at the paper to take concrete steps toward promoting diversity and inclusion in the newsroom. A letter from the 16 members of the Black Caucus of the L.A. Times Guild, co-signed in solidarity by dozens of other Times journalists, asks owner Patrick Soon-Shiong and top editors Norman Pearlstine, Kimi Yoshino, and Scott Kraft to invest in hiring and retaining Black journalists, and to reshape the publication’s content.

“The nation’s reckoning over race has put a much-needed spotlight on inequities at The Times. We are in a crisis and it is not new,” the letter reads. “We don’t have enough Black journalists—or, more broadly, journalists of color—to cover our overwhelmingly diverse city, state, and nation with appropriate insight and sensitivity. And most of us who do work here are often ignored, marginalized, under-valued, and left to drift along career paths that leave little opportunity for advancement.”

Many of the journalists’ requests from management address employment disparities between Black journalists and their non-Black colleagues. In addition to pointing out that Black journalists are “woefully underpaid compared to our white counterparts,” they ask for resources for professional development and say they hope to see reporters of color given the same opportunities for promotions and special assignments. Currently, they note, the paper employs only 26 Black journalists

“Often, our framing and selection of stories is designed mostly with a white audience in mind at the expense of communities of color”

They also hope to see a shift in Times culture. As initial steps, the letter calls on Pearlstine and Yoshino to meet one-on-one with Black journalists to hear first-hand accounts of discrimination at the paper, and for a formal, public apology.

“This is not just for the Black journalists on staff, but for the communities that The Times has maligned over the years with tone-deaf coverage that has often inflamed racial tensions. If we are to move forward, it is important to confront and make peace with our past,” they write.

Moving forward, they call on those in power to create journalism that, they feel, will more fully represent the communities they cover–an audience, they say, Times staff have already identified as a “neglected and untapped base of potential subscribers,” a business argument which may be convincing amid economic turmoil.

“Often, our framing and selection of stories is designed mostly with a white audience in mind at the expense of communities of color,” they write. “Our coverage must capture the nuance and complexity, in particular, of the Black community. That starts with listening to reporters.”

While concerns among staff have been long-standing, the conflict within the Times newsroom flared recently over how the publication should appropriately cover the demonstrations following the killing of George Floyd. Some journalists felt uncomfortable in particular with editorial pressure to focus on acts of vandalism and theft in the early days of the protests.

“One of the active debates we had over the past week was about the use of the word looting to describe the destruction of property,” Pearlstine told PBS NewsHour in an interview on June 9, noting that it was “very much the feeling among the Black journalists at The Los Angeles Times, who, frankly, educated the rest of us to the fact that looting had a pejorative, racist connotation, and that comparing it to the kind of behavior of the police and the kind of behavior that we witnessed really was a false equivalency.”

“We don’t think twice about saying that anti-fascism would be part of our mandate as a journalistic institution. Anti-racism certainly should be similarly central to our core”

He acknowledged in that interview that the journalism norms must allow for reporters to operate from a place of “moral purpose” when selecting what stories to tell and how to convey information to their audience.

“We don’t think twice about saying that anti-fascism would be part of our mandate as a journalistic institution. Anti-racism certainly should be similarly central to our core,” he said. “I think that the danger is that we not only recognize the need to tell stories, but that we also need to have a moral purpose. Otherwise, I think that the freedoms that we get with the First Amendments are not deserved.”

In a piece published by the Times on May 30, LZ Granderson described the “special hell reserved for Black journalists” covering the aftermath of Floyd’s death.

“It’s a unique balancing act, juggling your humanity with your profession against the backdrop of both being under relentless attack in today’s toxic political environment.” Granderson wrote. “Journalists of color recognize how important, essential, it is that we be there to bear witness. I do not look forward to going back into the streets to hear the cries of a hurting people. In fact, I dread it. But I do it because I recognize the melody. Their song is my song. Their pain is my pain. They have taken to the streets because they feel they have no other choice. So I, and others, follow, because neither do we.”