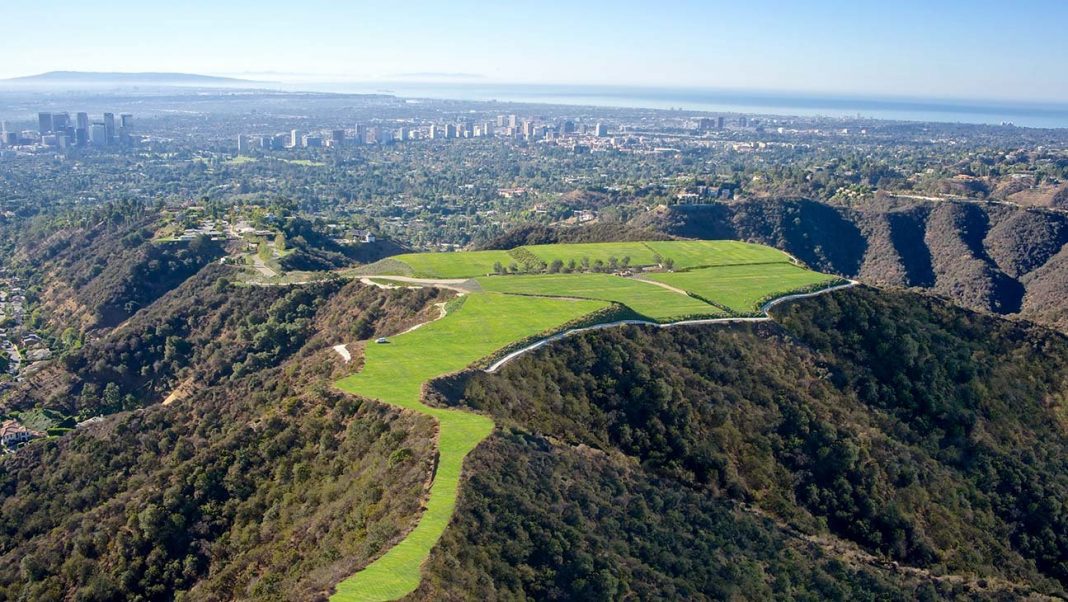 The storied Beverly Hills plot known as the Mountain–a 157-acre, largely undeveloped parcel of land with sweeping views from every direction–was on the market a year ago for $1 billion. Yesterday, it sold for a mere $100,000 at a foreclosure auction held behind a fountain in a park in Pomona.

The $100,000 bid from the Mark Hughes Trust was the sole paddle raise of the auction. Why didn’t anyone else offer a bid, when even the most modest house in L.A. County typically sells for several times that amount? Because the property came with one significant caveat: the buyer would have to assume $200 million in liens on the property–debt owed to none other than the Mark Hughes Trust.

Mark Hughes, the namesake of the trust, was the founder and CEO of Herbalife. The businessman amassed a huge fortune from the company he started at age 24, and in 1997 he bought the Mountain (also known as the Vineyard) from game show mogul Merv Griffin for $8.7 million, which the Los Angeles Times reported at the time as the most expensive Southern California property sold up to that time. The plan was to construct a mansion, wildlife reserve, tennis courts, and massive pond, according to a 2015 Hollywood Reporter article. But Hughes died in 2000 at the age of 44, having never broken ground.

His will named his son, Alex, as the sole beneficiary of the fortune, including the property. Alex was 9 years old at the time; the estate was put under the control of a trust to manage until he turns 35. The managers of the estate began looking into ways to develop the Mountain plot, ostensibly to maximize the value of the inheritance. The trust started the process of creating a “tract map,” a zoning procedure allowing for the development of multiple homes on the parcel, and took meetings with potential investors.

Ultimately, an unusual deal was struck. In 2014, the trust itself loaned what started as $23.75 million to a developer, Tower Park Properties, a move known as a seller-financed purchase. As time went on, millions more would be loaned out from the trust to do pre-construction on the land, preparing for six large homes to be built. And all of those loans came with interest and fees.

Once the tract map was in place and terrain grading and other initial work was underway, investors approached Tower Park Properties, the property’s legal owner, with increasingly extravagant offers. Tom Cruise was considered a serious bidder at one point, though nothing came of the discussions. In 2008, the trust decided to pull the plug and stop financing Tower Park’s development of the land. From there, the trust and developer would be in and out of court, wrangling over the property and access to funds to build on it, for years.

Alex Hughes’ legal guardian, Suzan Hughes, told the Hollywood Reporter that she felt “stunned” and “fooled” by how the transaction was carried out, though a different source in that same account revealed Suzan Hughes may have accepted some form of up-front payment to withdraw her initial objections. In either case, by 2013, all of the trust’s original managers would be removed from their roles after courts found a variety of issues of mismanagement and violations of probate laws.

With new trustees in place and a legal settlement reached between the trust and Tower Park, a new figure entered the arena, Victor Franco Noval. The son of Victorino Noval, who the Los Angeles Times reports was convicted of mail fraud and tax evasion in 1997, Victor Noval claimed to represent an investor from the Middle East, interested in covering Tower Park’s debt in exchange for equity in the property. This arrangement lasted until three years ago, when Tower Park transferred its ownership entirely to Noval’s LLC, Secured Capital Partners.

The famous billion dollar listing hit the market in July, 2018. Aaron Kirman, the listing agent brought on by Secured Capital Partners to find a buyer for the Mountain, billed it as the “crown jewel of Beverly Hills” and he speculated to the Times that one of the world’s wealthiest people might buy the plot. The paper estimated Kirman’s marketing budget alone for the listing to be at least $400,000. While it generated a flurry of press reports for the audacious asking price, no sale ultimately resulted.

Secured Capital now found itself in a problematic situation. The interest on the initial loans from the trust had ballooned to $200 million, more than even their deep-pocketed financier could pay, and there was no sale on the table, even after a year on the market. In July, the LLC attempted to file for Chapter 11 bankruptcy, but was denied. The Hughes trust decided it was time to force Secured Capital to put the deed up for sale in a foreclosure auction.

One of the world’s most exclusive properties went up for sale alongside other foreclosed Southern California properties at a small auction at Civic Center Plaza in Pomona. According to the Times, only about 20 people were in attendance, and when it came time for bids on the Mountain, nobody stepped forward. The attorney in charge of the auction then announced that the property would go to a bid already on file. The Hughes trust bought the property back for a credit bid of $100,000 (a credit bid means the money comes out of the debt already owed to the creditor, so in a sense, they bought it back for nothing at all).

A woman who wouldn’t give her name and the Times could identify only as someone who “bore a striking resemblance to Hughes’ widow Suzan Hughes” was spotted appearing to cry tears of joy that the legal ownership of the parcel was returned to the trust.

Not all the legal loose ends are tied up in a perfect bow. Just days before the auction, Secured Capital transferred it’s ownership back to Tower Park Properties. And since Tower Park had successfully entered bankruptcy earlier, there was an existing bankruptcy plan on the books for that entity which, among other things, requires three weeks notice of default before a foreclosure. This maneuver did temporarily stall the auction, which had been scheduled for August 15, but only for a matter of days. Now, the Times reports, Tower Park is planning to bring wrongful foreclosure actions against the estate.

RELATED: Should the City Use Eminent Domain to Keep Housing Affordable?

The Guy Who Finds Million Dollar Mansions for TikTok Stars