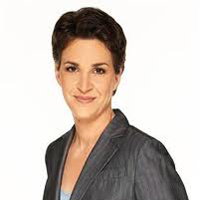 After a thirty-second-long photo op Rachel Maddow and Bill Maher settled in to two chairs set mid-stage at the Saban Theatre in Beverly Hills Tuesday night and got to talking about American presidents. A two-sided political discussion this was not. Rather, the liberal hosts of The Rachel Maddow Show on MSNBC and Real Time With Bill Maher on HBO prodded each other along as they surveyed U.S. foreign policy post Lyndon B. Johnson and the subtle and not-so-subtle ways in which the power to send America to war has moved from congress to the oval office since the Vietnam War. That and the gradual outsourcing of militia affairs to “hard to google” third-parties is the subject of Maddow’s new book, Drift: The unmooring of American Military Power, which she wrote because she felt she couldn’t get the topic off her chest in a broadcast medium. (Score one for print journalism.)

Over the course of an hour, Maddow and Maher touched on presidents Reagan (“Saint Reagan,” as they called him), Bush (George H. W.), and Clinton, all of which, according to Maddow, bended the laws surrounding the use of the U.S. military (hello, National Security clauses) to political ends—all the while distancing the American public from the economic and emotional costs of being a nation at war.

“I think the founders would be pissed—, ” said Maddow.
“Because there is a black president,” said Maher, butting in.
“And then I’d introduce them to Susan,” added Maddow, referring to her longtime partner, Susan Mikula, who was in the audience.
“They’d be OK with that,” deadpanned Maher. “But, she votes?”

Maher got another crack in later, one about Mitt Romney’s wife, Ann, calling the republican candidate “unzipped.” “That’s the thing about Mormons,” he said. “They don’t even know when they’re making a dick joke.” The audience—fans of Maddow and Maher, clearly—cracked up. After another thirty seconds of applause, the event was over—and the Republican primary felt like it was happening far away again.