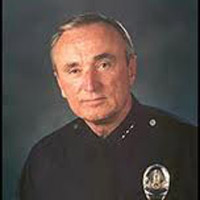 Share
Email
Facebook
Twitter
Pinterest
ReddIt
The Dodgers announced yesterday that they have hired none other than former Los Angeles Police Chief Bill Bratton to advise the team on improving security and fan safety at Dodger Stadium.
The hiring follows the brutal beating of Giants fan Bryan Stow in the stadium parking lot on Opening Night last week.
Bratton left Los Angeles in 2009 to work as Chairman of Altegrity Risk International in New York. In September he became chairman of Kroll, an Altegrity company.
“I am pleased to have the opportunity to return to Los Angeles to consult with the Dodger organization on the security posture at Dodger Stadium,” Bratton said.
Some security upgrades are expected before the next Dodgers home game.