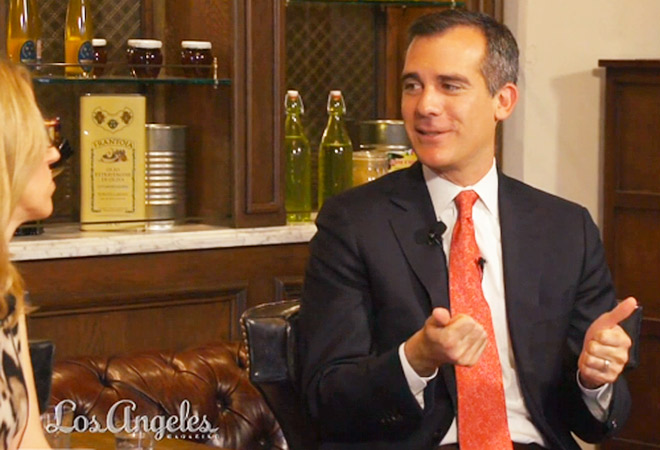 In the third installment of Big Shots: Eric Garcetti, the mayor gets candid about our lack of civic engagement (both in terms of voter turnout as well as investing in L.A.) along with the state of the LAUSD.

On voter apathy:
“…An election is the reflection of the work done between an election…it’s not a vote every four years or every two years, it really is what do you give every day? And Los Angeles has not made a very permeable system for coming in and helping out. I think we’re the most generous city maybe in the world when it comes to individual causes…but how often have all of you been asked to do something for L.A. as L.A.? Probably never, or very rarely. And when I compared New York, the Mayor’s fund there, or Chicago, the sort of civic entities, I realized our civic fabric is so weak.”

On supporting public schools:
“…All of us need to own our public schools, both charter and non-charters. What do I mean by that? There used to be a time when the school truly was the center of a neighborhood, and we’ve turned them into islands…with a couple of exceptions, every single one of these schools is a little fortress. And they’re ugly, they don’t speak to the community. They’re painted bright colors, which is good for the kids and I’m glad, but they didn’t engage L.A….I and Tom Labonge installed lights for the first night game at Hollywood High. Can you imagine what it’s like, to have a football team, grow up, and all your life never have the experience of a night game?”