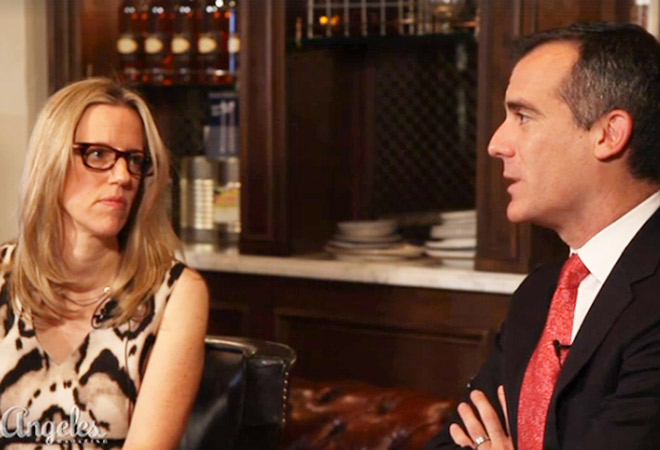 In the fifth and final episode of Big Shots: Eric Garcetti, the mayor touches on his goals and ambitions for Los Angeles, why he considers Instagram and Twitter invaluable tools, and that inescapable topic: traffic.

On L.A.’s changing car culture:
“Kids these days, they don’t want cars…in North Hollywood, the statistic around those [Metro] stations is, 50 percent of the residents are under 30. So they’re choosing to live in those apartments. They’re nice apartments, they get on transit, they have bikes, and the thing we all felt when we were 16, the ‘I can’t wait to get a car,’ it’s not happening.”

On criticism that he’s not “high-profile” enough:
“I want to be high-profile with the average Angeleno. I want to be out there holding office hours on a curb in Boyle Heights. I went doing a walk in Venice door-to-door, which a mayor has never done before, and I hoped a dozen people would come. Two hundred went door-to-door with me. We did the budget town halls…we’ve had already over 1,000 people come out to those sorts of things. That’s the sort of high-profile that’s much more satisfying. It gets to your voter turnout. If those folks feel like they’ve actually been listened to…That I think is the kind of profile we need.“

On his mayoral policy:
“I think our communication strategy has been very disciplined as being a back-to-basics mayor and about focusing on making City Hall work and jumpstarting our economy. I figure, if I earn from all of you the respect of having moved forward with the basics, we can turn to the nuances of the other things. But if you get distracted by all of those [other things] early on, people say, ‘Why aren’t the streets paved, why am I still stuck in traffic, and why is this economy so bad I can’t find a good job?’…We have to engage people to help with that, then we will earn the right to do the other things.