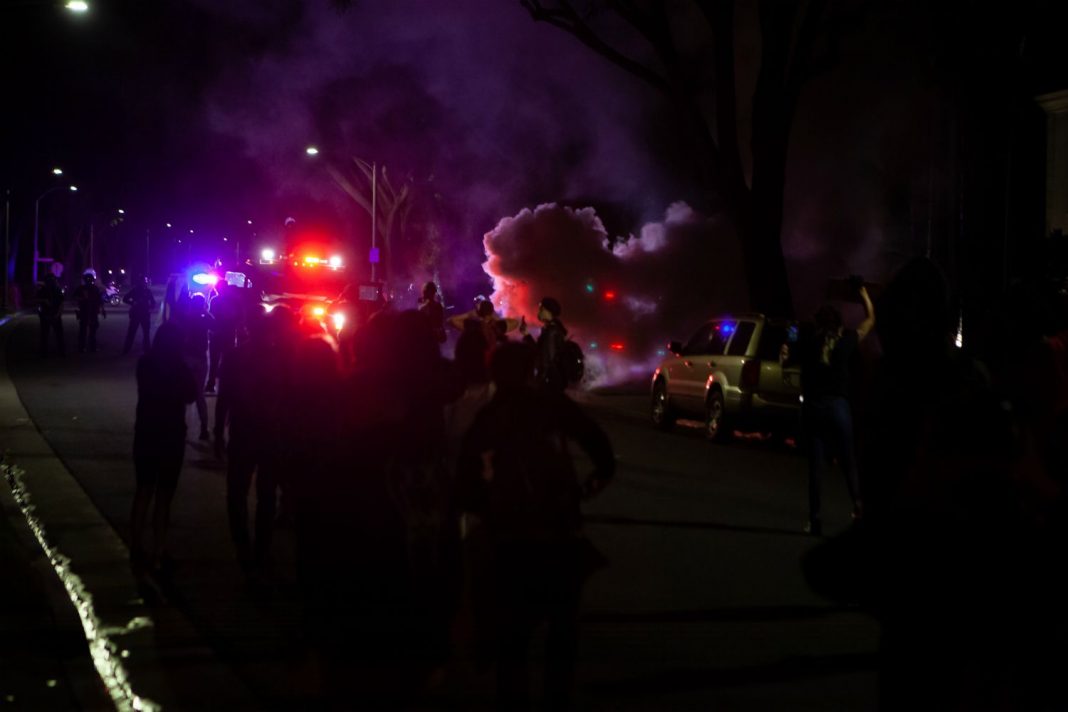 Police officers with the Beverly Hills Police Department used tear gas and sponge-tipped grenades on protesters at around 11 p.m. on Friday night. The group of roughly 50, which identified itself as Occupy BLM, made its way down Santa Monica Boulevard before turning onto a residential street, where police formed a skirmish line and declared an unlawful assembly. Police deployed the grenades even as the crowd complied with orders to return to Santa Monica Boulevard, injuring multiple protesters. No arrests were made.

“We did comply,” said Krizia Berg, who was struck multiple times by sponge bullets and sustained a wound to her hand. “We complied the entire time. I was getting hit as we were moving back.”

Law enforcement in Los Angeles has come under criticism in the last few weeks for its use of force against protesters, who have been driven into the streets to voice outrage about the murder of George Floyd in Minneapolis. Black Lives Matter L.A. filed a class action lawsuit against the LAPD on June 5 for its “excessive force with batons and rubber bullets, and prolonged handcuffing and improper conditions of confinement.” So far, though, BHPD has not been the subject of much scrutiny for its interactions with protesters.

In a statement, BHPD said that protesters trespassed on private property, threw objects at officers, and pointed a laser at officers.

“The Occupy protestors continued to aggress the officers and began to assault officers by pointing lasers in their faces and eyes, a crime in California,” said a spokesperson for the department. “BHPD directed sponge projectiles towards protestors using lasers and those throwing objects at officers.”

At least one protester far away from the front of the group pointed a laser at BHPD officers. Other protesters made an effort to identify and stop the individual.

The protest began on the edge of West Hollywood and Beverly Hills on Santa Monica Boulevard and Doheny at 10 p.m. Organizers had planned on marching down Santa Monica, through a few residential streets, and ending at the Beverly Hills sign for a night of music, poetry, and history lessons.

“The plan was to have a conversation and then dance and play music,” said James Butler, a model and YouTuber who organized the event. Butler chose Beverly Hills to expose the wealthy enclave to the conversations currently taking place at protests across the country. “I was saying, wake their rich asses up.”

The march barely made it onto a residential street, North Alpine Drive, before a fleet of police officers arrived at the other end in full riot gear and with an armored vehicle.

A voice blared out from the loud speaker on the armored car: “As a peace officer with the Beverly Hills Police Department, I hereby declare this to be an unlawful assembly and in the name of the people of the State of California, I command all those assembled…to immediately disperse.”

Members of the group held their ground, chanting popular protest phrases at the officers in front of them and at the stately homes on either side. “Whose streets? Our streets!” they yelled, taking a knee before the line of officers.

Butler stood in front of the crowd and spoke directly to the officers. “We just to educate you,” he said through a megaphone. “The first ever police system in the United States of America was KKK.”

“This is a test of the Long Range Acoustic Device,” came a prerecorded voice from the armored car, referring to a sonic weapon device used for crowd control. Immediately, protesters began to back up and return to the main street below.

Soon, though, even after using the LRAD twice, plumes of smoke appeared at the front of the line of protesters followed by loud popping sounds. Calls for a medic ran through the ranks of protesters.

“Fuck you! We walk back and you fire?” one protester shouted, his voice horse from chanting.

As protesters made their way back toward Santa Monica, many walking backwards, police continued to shoot sporadically.

“Ain’t no riot here, why you got your riot gear?” they called out.

When protesters merged back onto Santa Monica Boulevard, officers fired a barrage of tear gas canisters and sponge bullets. Projectiles ricocheted off of street signs, broke nearby glass, and thudded against bodies. Cries of “medic” rang out from protesters who surrounded a man in a baseball cap, flushing his eyes with water, as a woman wretched nearby.

The voice from the armored car called out again. “[I]n the name of the people of the State of California, I command all those assembled at the City of Beverly Hills…Business District, to immediately disperse, which means to break up assembly. If you do not do so, you may be arrested or subject to other police actions. Other police actions could include the use of force, which may inflict significant pain or result in serious injury—”

While some expressed surprise at the sharp turn in the night’s events, others saw it as part of a larger, expected pattern.

On their way back to Doheney, the street they set out from, members of the crowd took turns leading chants, making brief speeches, and singing. Even as the police continued to issue orders from the riot truck, protesters crooned in unison Sam Cooke’s “A Change Is Gonna Come.”