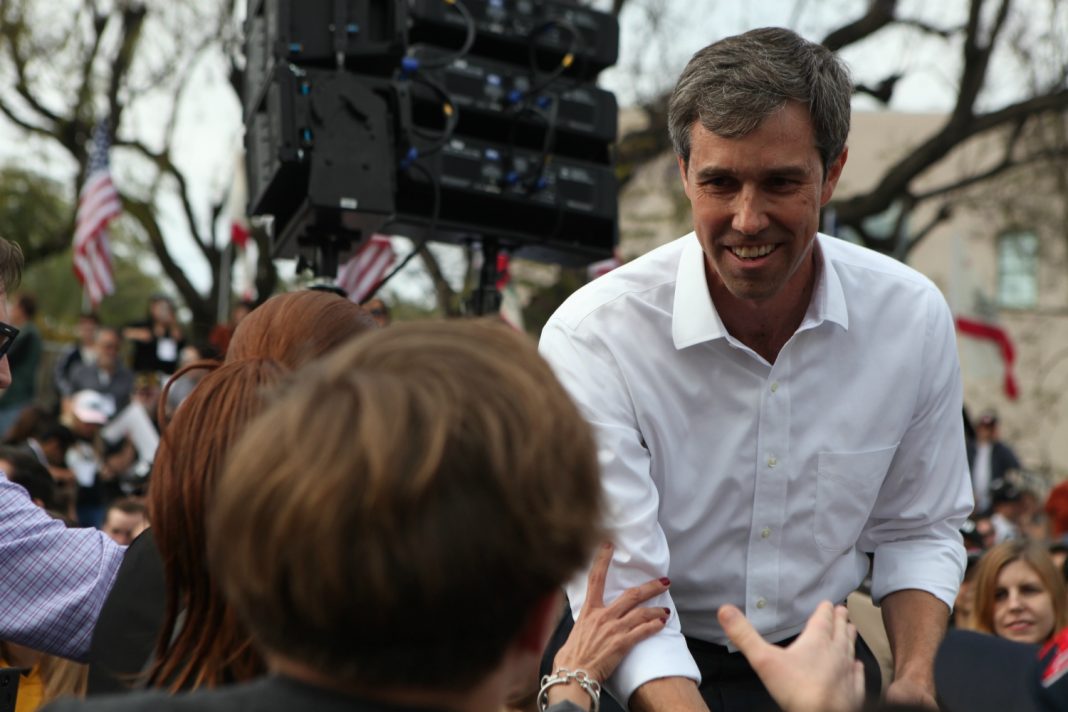 Still struggling to find his footing in a national race, one-time Democratic darling Beto O’Rourke stopped by Los Angeles on Saturday as a part of a four-day tour of the Golden State. Both in tone and substance, O’Rourke’s 20-minute speech at Los Angeles Trade-Tech College signaled a shifting strategy in response to an electorate hungry for specifics. But even while the former congressman voiced support for stricter gun control and universal healthcare, he still seemed unable to escape the contrast between his early success and his campaign’s current slump.

O’Rourke arrived on the outdoors stage only hours after a terrorist attack at a synagogue in San Diego left one dead and three injured. In his breathless, halting style, the congressman listed other recent mass shootings, saying, “I know for all of the victims, all those who lost a loved one, all those who lost something of themselves in that shooting and in those shootings, we send our thoughts and our prayers and our wishes.”

“But I hope that I speak for everyone in saying that we will also back that up with our actions to make sure that in this country that sees more than 30,000 gun deaths every year, a rate not seen anywhere else in the world, that we will insist on universal background checks for everyone, without loopholes or exceptions,” he continued. “We will also insist and ensure that weapons that were designed and sold to the United States military, with the express purpose of killing people as efficiently as effectively and in as great a number as possible, are kept on the battlefields and are no longer sold in our communities, because they will end up in our synagogues, in our churches, in our mosques, and public places.”

O’Rourke skyrocketed to prominence in 2018 during his underdog senatorial bid against Texas Senator Ted Cruz. He lost by 2.6 points, the narrowest margin in a Texas Senate race since 1978, but he won the hearts of Democrats around the country. Almost no sooner had he lost than his name began circulating as a possible 2020 contender.

Still, even at Saturday’s rally, one moment stood out for the attendees as O’Rourke’s defining moment: a viral video of the then-Senate candidate defending NFL players who kneeled during the national anthem. The four-minute clip caught the attention of Reggie Watkins, an actor who came out to learn more about O’Rourke.

“I saw that viral message he had when he was talking to a church,” Watkins explained. “It really resonated with me so I wanted to what he was about in person.”

But Beto isn’t the only hot dish on the buffet anymore, and he has yet to repeat his viral success. He has been supplanted in part by Pete Buttigieg, Mayor of South Bend, Indiana, as the young, white, male ingenue of the Democratic Party. O’Rourke trails behind Buttigieg in the most recent polls from one to four points (although, this early on, those differences are largely symbolic).

While over 1,000 supporters all over the country hosted watch parties when O’Rourke announced his candidacy on March 30, the Washington Post points out that only two Saturdays later, the campaign could only mobilize a third of that number to hold local canvassing events.

On this particular Saturday, a campaign staff member reported that 3,000 people had RSVP’d to the rally. After the line had emptied itself through the school gates, an aide held up the calculator app on her phone showing that 663 people had shown up.

RELATED: Andrew Yang Probably Isn’t Who You Think He Is