Home Uncategorized Behind the Scenes of the Hollywood Sign 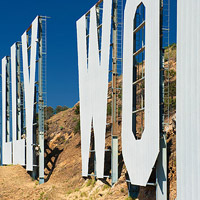 “Don’t tell anyone how you got here.”

A young woman in a tank top, shorts, and sneakers makes this request as her car chugs its way to the top of Mount Lee. It’s fair to say the tour guide needn’t worry: I couldn’t remember the twists and turns of the Escher-like levels of road if I tried. During most of our ascent, I’m focused on the Hollywood Sign, its letters getting larger with every street. The sign is one of the most globally recognized monuments in the world—and also one of the most mysterious.

Strange to think in our GPS world, the exact route to the Hollywood Sign remains (more or less) a secret, but that’s exactly how the gatekeepers at the Hollywood Preservation Trust like it: an icon best enjoyed from afar. Even if you happen to figure out how to drive, then walk, then hike the trails leading to it, there’s a fence along the perimeter around the sign with security cameras, police protection, and plenty of Keep Out signs.

Once inside the gates, it doesn’t get much friendlier. There is no paved path down to the sign. It’s accessible by clumsily walking along an unkempt, rocky bit of path and then—if you’re lucky enough to have a tour guide equipped with 100 feet of sturdy rope—you rappel down about 65-70 feet to reach the base of the sign below. This spot is treacherous by general hiking standards—now add a camera crew, as many who request access to the sign often do.

I had the rare privilege to access the Hollywood Sign while reporting for our July issue’s How L.A. Works. It was awesome in the truest sense: standing close-up to the 45-foot sheets of bright white steel spelling out H-O-L-L-Y-W-O-O-D gave the structure—and all of Los Angeles—a level of majesty I’ve never really experienced before. From the Hollywood sign, you can see everything.  Downtown L.A. on one side, Catalina Island on the other. The Hollywood Bowl looks like an Aztec crop circle and just above it is a tiny, privately-owned vineyard where (we were told) bottles of wine are quietly sold for $200.

What struck me most about the Hollywood Sign is its pristine condition. The land around it is intentionally inhospitable (except to the coyotes, wild birds, and other creatures who call it home) and yet the sign itself is nearly flawless—free of graffiti, dents, and structural damage. We’ve hopefully captured some of the details I saw that day through these photographs (shot by Ryan Forbes). For all the geeky backstory about the Hollywood Sign, past and present, click here.