Home Uncategorized Behind the Mask 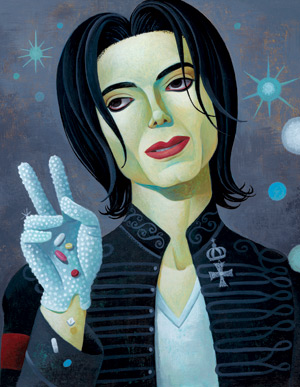 When we heard about Michael Jackson’s death, it seemed somehow shocking, unexpected. Here was a man who was only 50, a world-famous entertainer gearing up for a major tour, and the devoted father of three young children. How did this happen? Why? In the midst of a global wash of mourning, questions surfaced and the answers all came back to the same place: drugs, pure and simple or pure and complicated, including a new one most of us had not heard of—Diprivan, a surgical anesthetic. A nurse made the TV rounds, saying Jackson had begged for the medication, while the names of doctors—people who purportedly had been Jackson’s suppliers—flashed through the media ether.

The star had apparently been mainlining legal drugs, in various combinations, for years, unable to stop, unable to kick the habit, unable to face the darkness within—whatever its origins. At the end of the day, Michael Jackson, icon to so many—and yes, I would include myself among them—died a junkie’s death no less than the homeless heroin abuser who dies alone in an alley. Jackson might have been living in a fancy house in Holmby Hills. He might have had expensive doctors administering to him. But he was the addict. He was taking the stuff—the painkillers and sleeping potions and that potent IV anesthetic. If his death was a shock, that’s only because we, his fans, were in denial as much as he was.

After all, we had collectively watched him get nuttier and nuttier, thinner and thinner. In interviews he sounded like a frightened child, erratic and baby voiced. Along the way there had always been allegations of serious drug abuse; in 1993, Jackson admitted to taking pain medication and ended up in rehab in London. Obviously he didn’t—or couldn’t—stay clean.

For people who haven’t felt a twinge of such a craving themselves or haven’t been around that kind of obsession, the mania of it no doubt seems foreign and weak. I, alas, have a lot of respect for the hold it can take on a person, even a kind person, a sensitive person—as Jackson was often described. My father had great tenderness in him, but he was also an alcoholic, and I grew up in a household that danced to—and ducked—his moods. None of us were talking about alcoholism or addiction at that point. You didn’t tell your friends. You didn’t talk about it with other family members, not in any real way. You tiptoed through your childhood, holding your breath, waiting for him to take the drink that would push him into the mean, mad place. And then you shut up, made yourself small to escape his attention, or you went adorable and tried to placate him by putting the olive in his next martini. I became, at a very young age, an ace enabler, to use the AA parlance.

I consequently married a man who abused drugs and alcohol, and I watched him struggle, as I had my father. I was lucky. Both finally got sober; both got involved in the recovery world and I along with them. I ended up learning a lot about what drives the addict—the leftover childhood wounds, the sense of unworthiness, the secrets—and about the constant honesty and vigilance necessary to quell the desire for self-medication. One has only to look at the Michael Jackson of recent years, at the bizarrely inauthentic thing he had become—of which his altered appearance was so emblematic—to understand how far he was from that kind of personal reckoning. What did he think when he looked in the mirror?

Despite all the success and all the accolades, he was hiding behind that surgically sculpted mask, unwilling or unable to face the world or himself without something in his system to blunt the edges, numb the nerve endings. That’s what addicts seek—something to stop the feelings, and inevitably they need more and more of the intoxicant or intoxicants of choice, whether it be pills, booze, or shots. Jackson apparently availed himself of everything, grabbing whatever he could to still the hurt or the shame or the memories of the beatings he suffered at the hands of his father.

In some ways a star like Jackson has it worse than others, armored as he was in celebrity as a child. He learned to perform at a young age and was well compensated for it—both financially and emotionally. The habit of dissembling began before he was fully formed. In his freakish early talent he reminds one of Judy Garland, so thin and so addicted and so gifted and so much the pawn of everyone around her, including, in her case, a studio system that got her hooked on diet pills and uppers and downers when she was in her teens. When Jackson started to use is hard to know, but clearly he had been taking whatever for years—as she had—to get up for a performance and come down afterward. An excuse that becomes a need that becomes an excuse. Jackson talked about craving sleep, certainly in the last several years. But battling insomnia with Diprivan is extreme, to say the least. This was someone who wanted out of his mind and out of his skin.

Of course, he had ready help, as does anyone at his level of fame. There were the inevitable groupies and sycophants—including members of the medical profession—only too happy to feed his habit, do his narco bidding in order to bask in his aura. He had doctors always near him, allegedly willing to give him prescriptions for every possible pill. I can’t imagine that they didn’t know he was an addict. I am astonished at the alacrity with which physicians hand out, say, Vicodin to anyone with a toothache or a backache, no questions asked. Many in medicine have a willful ignorance about addiction. They just don’t get it or don’t want to. Then there are the drug companies, ever eager to hawk their wares—Michael Jackson died with legal drugs all around him.

His fans, too, are implicated. We watched, taking a kind of prurient interest in his weirdness and disintegration. Our tabloid culture seems to have a disturbingly romantic notion of the unruly appetites of celebrities. We feast on their messy missteps, getting an almost erotic kick out of their premature deaths. Since Jackson died, he has been constantly in the news. The same was true of Heath Ledger, who accidentally overdosed on a cocktail of prescription and over-the-counter medications and was personified posthumously as the oversensitive artist who needed drugs to cope with the rigors of fame. That again is a misreading of addiction, which can and will take down anyone—celebrity or not. There is nothing romantic about the way Heath Ledger and Michael Jackson died. Pathetic might be more accurate—sad, of course, but also pathetic.

So could Jackson have been saved? Could anyone have stopped him? No doubt his family and friends tried to talk to him through the years. Reportedly some of them were planning to mount an intervention just before he died. I fault them and don’t fault them, because you can push really hard at the addict, you can cry and rail and plead (I did it all), and if that person isn’t ready to admit he or she has a problem and get help, your best efforts will come to nothing. Ultimately the burden was his. Ultimately he couldn’t do the work of saving himself.