Home Uncategorized Behind the Hedges 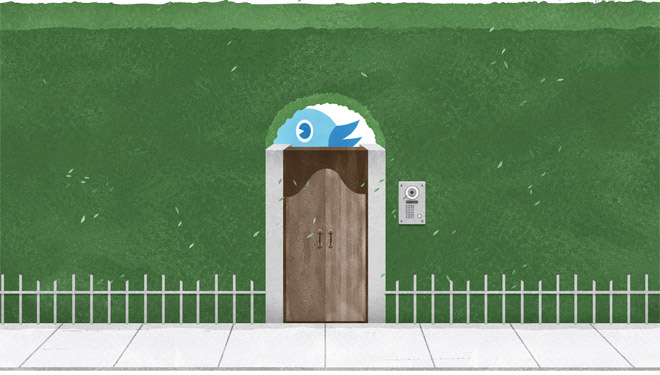 Whenever I return to my home turf after a trip, usually from a bustling city like New York, I am struck anew by something I take for granted: the extraordinary privacy in which we conduct our lives. I don’t often think about it when hunkered down. Most of us don’t. That quality is part of the air we breathe. But I savor it when I come back. The decibel level drops; the tension eases. Here I am in my own huge metropolis and there is no madding crowd, except on the freeways. Yet even there we are in effect cocooned, separated from one another, hands on the wheel, swear words at the ready, music playing. We live in unique isolation—and the truth is, we like it, on most days anyway.

Our houses, with their hedges and secluded backyards, are our centers, our refuges. We move across vast distances only to return to these domiciles with their blank, shuttered faces lining the street. We don’t spill out onto our front lawns or porches. I am amused when I walk my neighborhood, anchored by all these new white clapboard Cape Cods with balconies—the architectural trope du jour but a design element that I have never seen a single person actually use. We turn inward, away from the noise, the crowd, the menace—real or imagined. We are people with good boundaries, both literal and psychological. If the atmosphere in New York City is loud and public, the temperament of L.A. is muted and private. Because of the sun and the beach and the entertainment industry razzle-dazzle, recent arrivals might not get that at first and be put off and feel dislocated while we locals thrive.

This includes celebrities, who clearly benefit from the way we live. They can largely move among us without being bothered or hindered or, for that matter, fawned over. We respect their zones of privacy as we wish our own to be respected. They have helped train us to back off. Of course the paparazzi and the gossipmeisters of shows like TMZ do their predatory thing, trying to catch some hapless beauty without her makeup. But that happens mostly in the obvious places like LAX. The stakeouts are predictable; they transpire near the hot spots. The stars—often the second tier or maybe the third—might seek the limelight by hanging around those joints, but the rest can visit a coffee shop or take a jog or drop off a kid at school without being ambushed by a tabloid goon or a more innocuous fan.

I have never asked for an autograph. It wouldn’t occur to me; it would be so invasive, not to mention unhip. I have been tempted to pass on kudos to someone I admire, yet I have abstained from even that. I have watched Betty White at my favorite market a number of times but have refrained from telling her how fantastic she is and funny and a great role model for women who want to remain au courant and, yes, a bit vulgar into their later decades. It seems to me she deserves her privacy as she pushes her cart through the aisles, perhaps daydreaming or running lines in her head or wondering what in the world to have for dinner.

When people visit from out of town and ask to go someplace where they might catch a glimpse of an actor, I look evasive. It is an activity I have resisted, though I well understand the longing. We have become inured to celebrity here; we know the wild vicissitudes of fame, the punishing ups and downs, the rehab stints and struggles, and we have some sympathy for the complicated trajectories of those lives. Give them a break. Leave them alone. That’s why a notorious mobster like Whitey Bulger was able to live unrecognized in Santa Monica for years, within blocks of the beloved and much-patronized Wednesday farmers’ market. The locals just didn’t look hard enough. Hidden behind our sunglasses, we don’t scan each other’s eyeballs. Call it courtesy; call it a good habit or a bad one. Whatever it is, Bulger dwelled in sunny obscurity, Mob royalty on the lam in our paradise by the sea. I could have walked by him a time or two while toting my bag of newly procured produce.

Can this exaggerated sense of privacy ultimately make for a certain loneliness? Yes. We might like our space, but there is a concomitant need to reach out to another human being, be it a friend or a stranger, which is why we resort to social media. I confess I do, too. I will be sitting in my little home office and spy my dog doing something adorable—probably snoring with his long legs in the air—and I grab my cell phone, snap the shot, and zap it to my pals, hoping to snag a response, a shout-out from the wilderness. It’s not exactly like hearing a voice, but it’s the new normal, a quasi-intimate connection. You don’t have to leave your house or put on mascara or risk running into anyone. You just fling a missive into the ether and wait for someone to bite, to respond with a message that’s silly or warm like, “How cute is he?” I also send pictures of fancy desserts I make, a kind of virtual invitation to join in. It’s fun—warm and fuzzy in a weird, disembodied fashion.

For celebrities the virtual connectedness has been a huge temptation. Accustomed to accolades from their fans, many have splashed their personal lives all over the Web, with varying results. Some postings have elicited sweet rejoinders; others have incurred wrath and envy that the senders seemingly are not prepared for. Cloistered in their entitled bubbles and in the habit of micromanaging their own images, they somehow missed the fact that out there in the great wide Twitterverse are many who do not wish them well, people who aspire to their 15 minutes of fame via a textual smackdown of a celebrity.

Recently Demi Lovato, the sassy 21-year-old X Factor judge, stormed off of Twitter, saying she would give up her fortune to have her privacy back—this after she had tweeted about losing her dad. The actress Jennifer Love Hewitt is doing the same because, she says, of the negativity directed toward her. “Life should be filled with positivity and holding each other up, not making threats and sending bad vibes.” No doubt there are others taking this step back into the shadows.

It’s hard to have sympathy for some of them: high profilers with short fuses who have themselves been cyberranters, Alec Baldwin being at the top of the list. He unleashed a homophobic tirade against a journalist who accused his wife of tweeting during the funeral of James Gandolfini. Naturally he did it on Twitter, then said he was taking a sabbatical from the medium. (He’s already back.)

I have friends, including some younger ones, who have made the same decision to reduce their online presence. They are tired of the exposure, of potentially becoming targets of unpleasant remarks, even from alleged chums. I am not talking about full-out bullying, just the small, casual digs that can fly across the Web under the guise of amusing chatter. These new media often appear to elicit more tartness than tenderness; that has been a painful learning curve. I have heard a number of twentysomethings say, No more; I am off Facebook, off Twitter. They still text compulsively, but they are also making time to get together in person, crisscrossing L.A. of an evening to find one another, to sample the latest downtown bars or Venice restaurants. I root for them, the bald energy, but also for the desire to find a different way to live here, one that is more buoyant, more joyous, a little less barricaded. Watching them navigate Los Angeles—emotionally as well as physically—I am struck not only by their optimism, but by the aura of wistfulness that hangs over this town as we juggle our competing desires for privacy and for contact: the existential L.A. balancing act.