Home L.A. History Before Stonewall: How a Brutal Police Raid in 1966 at Silver Lake’s... 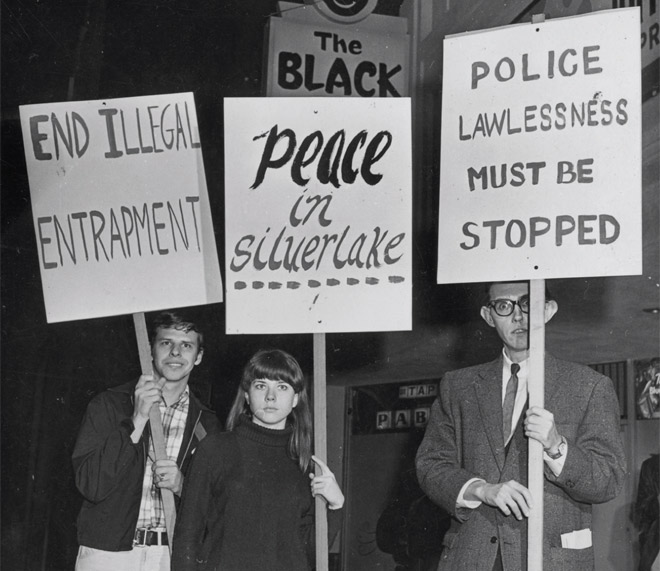 This column originally appeared in the September 2013 issue of Los Angeles magazine. We’re reposting it today in light of the Supreme Court’s decision to uphold the legality of same-sex marriage:

I
f you live anywhere long enough, you begin to see in layers, as if the present were a thin wash of pigment brushed over the past, or over several pasts. This is perhaps truer in Los Angeles than elsewhere, if only because we discard our histories so hungrily here. Look at the sign outside the Black Cat Tavern on Sunset Boulevard in Silver Lake. The grinning cat face, bubble eyed, is there as it has been for nearly half a century. The sign beneath looks just like the one that hung there nearly 40 years ago. It’s new. Until a few months ago the space it filled was empty, a painted frame that you could see the sky through.

On New Year’s Eve of 1966, the Black Cat had been open for just two months. It joined a dozen or so gay bars huddled around a single square mile of Silver Lake. Affection between men was officially a perversion, a crime, a sign of mental illness. But in a few bars in a few neighborhoods, gay men could find acceptance, companionship, the indispensable solace delivered by music, dancing, laughter. That night the Black Cat was packed, the barroom strung with Christmas lights. A trio called the Rhythm Queens was performing, and when the costume contest concluded at New Faces, the saloon down the block, 15 or 20 men in wigs and gowns squeezed into the Black Cat.

The clock hit twelve. Balloons tumbled from the ceiling. The Rhythm Queens belted out “Auld Lang Syne,” and for a moment there was time to grab a kiss. But not all the revelers were there for the same party. At five minutes after midnight, plainclothes policemen began swinging clubs and pool cues, dragging patrons out the door and into the street. They pulled the bartender over the bar, lacerating his face on broken glass. Two patrons ran across Sanborn and took cover in the crowd at New Faces, where Circus of Books now stands. Officers followed, breaking one bartender’s nose, leaving another with a ruptured spleen. Sixteen people were arrested that night—six of them charged with lewd conduct, also known as kissing.

The raid itself was nothing new. Police attacks on gay and lesbian establishments were so routine that most bars had developed warning systems. (The owner of the Patch, in Wilmington, would play “God Save the Queen” whenever he recognized an officer from the local vice squad.) Over the next week the LAPD would raid the Ramm’s Head, also in Silver Lake, and the Stage Door, on 6th Street. But defiance was in the air. “We were angry,” Alexei Romanoff tells me, sitting in the living room of his Pasadena home. Romanoff was an owner of New Faces before the New Year’s raid. “It had gone on too long,” he says with a boyish pride that erases at least half of his 77 years.

The stigma attached to homosexuality was so profound that earlier gay groups—like the Mattachine Society, founded in Los Angeles in 1950—resembled secret societies. But in 1967, L.A. gays found themselves with allies. The police had been beating white kids on the Sunset Strip, African Americans in Watts, Mexicans on the Eastside and in the Valley. A string of protests were scheduled for February 11 from Venice to East L.A. Romanoff and a corps of other activists began meeting at bars, handing out flyers, hitting the phones to spread the word. “Homosexuals, who have always been dependably meek, are fighting back,” announced the Southern California Council on Religion and the Homophile newsletter. Founded in L.A. the year before, the more radical PRIDE—short for Personal Rights in Defense and Education—urged its members to “join Negroes, Mexicans, hippies” and demonstrate against “the Establishment war on minorities.”

That Saturday hundreds of people (estimates range from 200 to 600) showed up at the corner of Sunset and Hyperion. The turnout was unprecedented. It was the largest rally for gay rights that had ever occurred in the United States. The protesters, Romanoff says, were terrified of police beatings but willing to take the risk. Only the Free Press covered the demonstration. Official L.A. was not eager to claim its foundational role in the gay rights movement. Activists in New York and San Francisco regarded events in Southern California—if they regarded them at all—with the usual mix of myopia and disdain. After the June 1969 police raid on New York’s Stonewall Inn, the protests at the Black Cat two-and-a-half years earlier would be eclipsed and, in the years that followed, forgotten.

The Black Cat closed and was reborn under many names over the years—the Bushwhacker, Basgo’s Disco (home on Sunday nights in the early 1990s to the famous Club Fuck), and Le Barcito. In its final incarnation as a gay bar with a mainly Mexican clientele, it won historic monument status in 2008 but nonetheless closed its doors on Halloween in 2011. The neighborhood had changed. Most of Silver Lake’s gay bars, and nearly all those catering to Latino customers, had gone straight and white or disappeared. Only the sign remained.

Late last year a restaurant opened where the Black Cat had been. The new owners revived the old name. There’s valet parking now, low lights, and shiny dark wood. The crowd is young, good-looking, and by all appearances mainly straight. Except for the busboys, almost everyone is white. On the walls are a few framed artifacts of the building’s past life: a copy of a handbill for the 1967 protest (“Crisis: Police Lawlessness Must Be Stopped!”), a black-and-white photo of a clean-cut young man holding a picket sign reading “Blue Fascism.” But there are Life magazine covers, too, and old photos from other eras, and the overall vibe is speakeasy chic. Brandy punch is served in teacups; Schlitz, in the can. The product for sale is not so much food or drink as it is a painless brand of dust-free nostalgia, not any specific past so much as pastness, kitsch tidied up and winking at itself. I sat at the bar and tried to imagine the Rhythm Queens crooning, the bartender yanked from his place and dragged through broken glass. I couldn’t conjure them. Those ghosts, at least, have been exorcised.

50 Years of L.A. Pride in Pictures