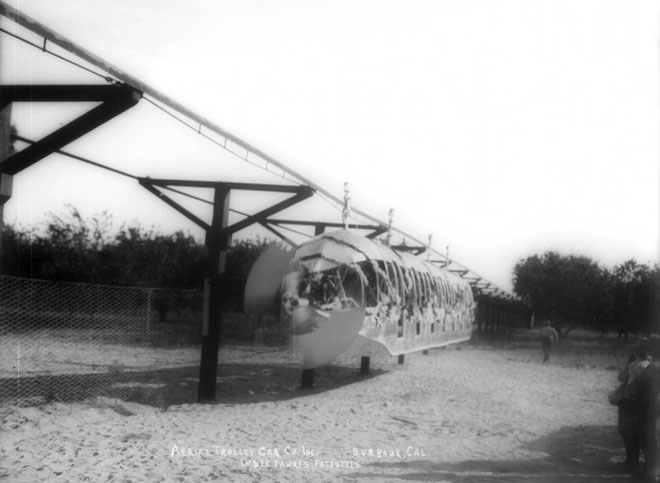 Decades before Walt Disney moved his studio there and dreamed up Tomorrowland, Burbank glimpsed another man’s futuristic vision in 1910, when a colorful inventor named Joseph Fawkes built an experimental monorail, the Aerial Swallow.

Since the boom of the 1870s, Los Angeles had experimented with a succession of technologies for moving people around the growing city. First came the omnibus, then the horse-drawn streetcar, the cable car, and finally the electric trolley. Fawkes fancied his monorail as the next step in that lineage. Suspended from an overhead iron rail, balanced by a gyroscope, and using a propeller for locomotion, the monorail could glide over roads, ravines, and streams, eliminating the need for at-grade crossings and costly bridges. It could move as fast as 150 mph, the inventor claimed.

In 1910, Fawkes and his wife Emma filed for the first of three patents for the system. To prove his technology, Fawkes cleared a swath through his Burbank orchard and built an 840-foot-long test track and prototype car. Glistening amid the inventor’s apricot and walnut trees, the torpedo-shaped monorail recalled the amazing machines of Jules Verne.

Between 1910 and 1912, curious passengers climbed aboard the Aerial Swallow and enjoyed a breezy ride down through Fawkes’ estate. But the test runs failed to win over a skeptical public. When the Pacific Electric Railway demanded from Burbank $40,000 to extend its tracks into the suburb, Fawkes proposed instead a monorail line to connect the suburb with downtown Los Angeles. Dismissing Fawkes’ plan, residents chose to pay the Pacific Electric’s ransom. Later, local protests doomed a similar proposal for a line between Santa Monica and Los Angeles. Eventually, the Aerial Swallow—denounced by then as “Fawkes’ Folly”—lay corroding in Fawkes’ orchard as its inventor turned to his next quixotic crusade: annexing Burbank to the city of Los Angeles.