Home Uncategorized Battle of the Boroughs: Nominate Your Nabe for the Annual Curbed Cup 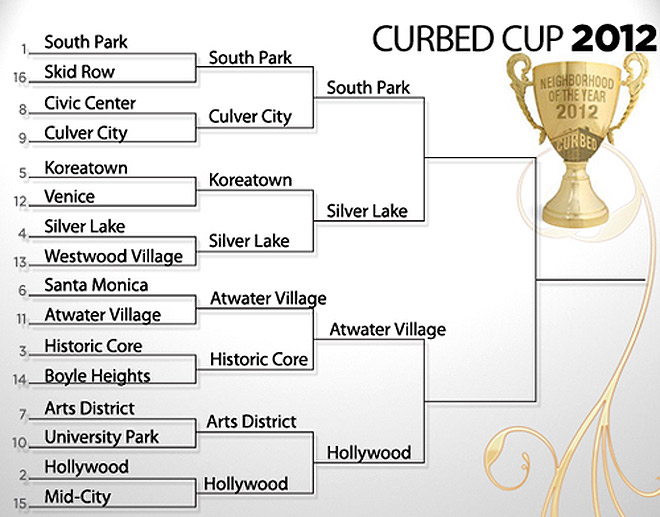 Feeling particularly proud of the strides your ‘hood has made in 2013? Consider putting it up for the Curbed Cup, an annual March Madness-style bracket designed by Curbed LA to determine Los Angeles’ Neighborhood Of The Year (see last year’s example bracket, above).

Only 16 stellar communities—ones that have seen growth and development in terms of real estate, restaurants, retail, and other goings-on—will have the opportunity to compete for the Curbed crown, a list that will be determined by you, the readers. (Considering we’ve got 114 neighborhoods, it’s going to be a tough call.)

Past winners have included the Historic Core (twice—once in 2008 and once in 2011), Culver City (2009), Hollywood (2010), and last year’s winner, Atwater Village. Curbed LA is now accepting nominations for the Sweet 16 via email and website comments, and official voting will begin later this month.

Battle Of The Boroughs: Curbed LA Announces Its 2013 Neighborhood Of The Year