Home Uncategorized Battle Of The Boroughs: Curbed LA Announces Its 2013 Neighborhood Of The... 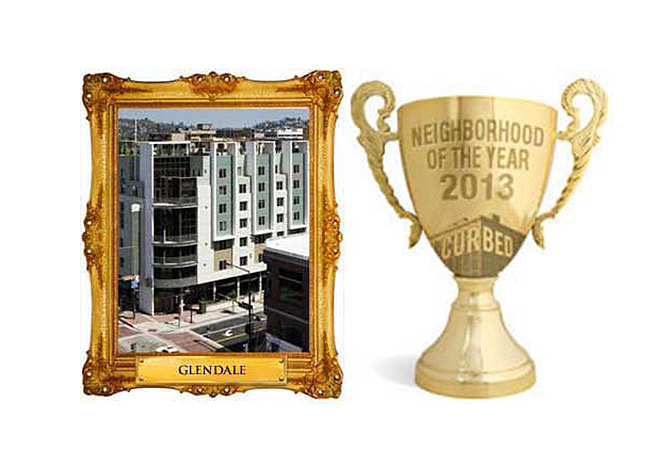 Last month we told you about Curbed LA’s Curbed Cup competition, in which readers vote for their community to be crowned Neighborhood Of The Year. Rivalries reared their ugly heads throughout, but at the end of the day, one ‘hood stands victorious: Glendale. That’s right, the home of Meatball the bear, Americana at Brand, and the third-largest Armenian community outside of Armenia has officially secured Curbed’s coveted borough bragging rights.

Glendale beat out 15 other communities (and ultimately the Arts District) to clinch the title, which is bequeathed based on a neighborhood’s growth and development in real estate, restaurants, and retail, among other things. “Undeniably, Glendale has had a great year,” Tom Lorenz, Public Information Officer for the city of Glendale, tells us. “From new housing in the downtown area and the Museum of Neon Art breaking ground downtown all they way down to recognition for bars like The Famous or the Mai Tais at Damon’s, I think people are seeing the changes that are coming and because of those changes they’re coming to see what the Glendale area is all about.”

But Curbed commenters aren’t so sure Glendale came by the honor honestly. After the article mentioned that Caruso Affiliated—the developers behind Americana at Brand—orchestrated a PR push in Glendale’s favor, voters were concerned that  the designation was bought and paid for. Lorenz, who contacted Caruso Affiliated in regards to the comments, says no such skullduggery was at play. “The best way to evaluate it is to look at Twitter,” he says. “I truly believe that the local organizations that tweeted it are all partners and stakeholders in Glendale and that social media is what drove the vote.”

Either way, the votes are in, and Glendale reigns supreme. Here’s to a new year of growth for L.A.’s neighborhoods.