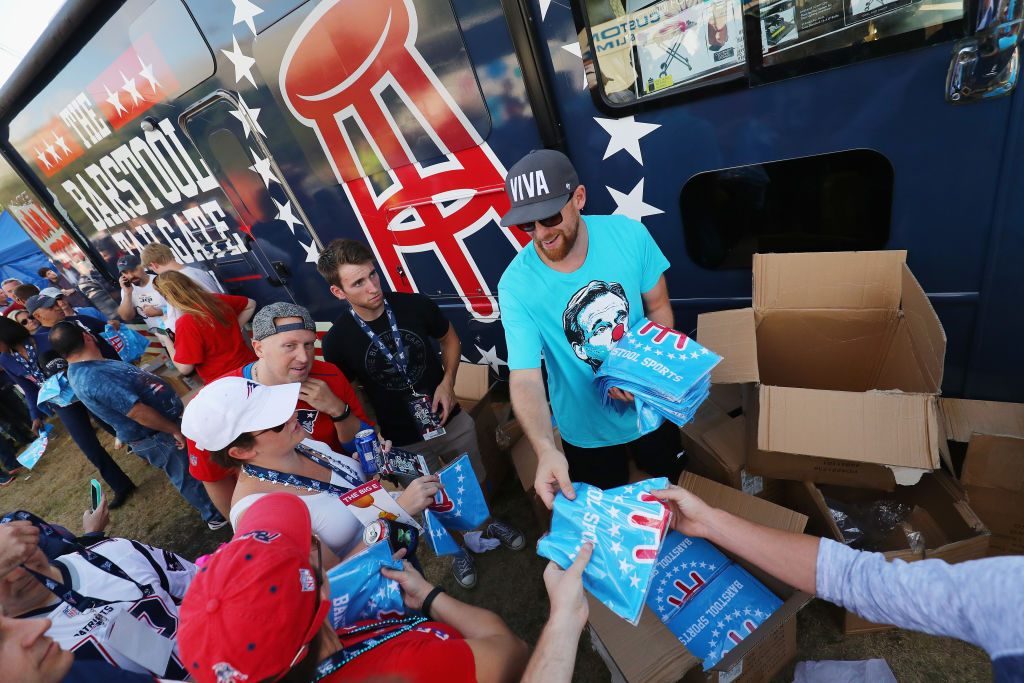 On Christmas Eve, local comedian and podcast host Miel Bredouw checked her phone and noticed a flurry of Twitter mentions. Her fans were tagging her to let her know that a video she made was being shared by the account of Barstool Sports. They were surprised she would be aligned with the bro-centric website with a vertical of female-created content called “Barstool Chicks”–and it came as a surprise to Bredouw as well. She’d never given the site permission to use her work, and they had neither credited nor compensated her for it. When Bredouw attempted to protect her content, she went through a campaign of what she perceived as harassment by Barstool Sports employees–the site’s own founder describes his staff’s behavior as “moronic,” saying it made the company “look like assholes”–followed by a shocking 180 on the part of Twitter that left her bearing the burden of taking Barstool to court to protect her own content.

The video in question is a clip in which Bredouw sings the lyrics to the Three 6 Mafia song “Slob on My Knob” to the tune of the holiday classic “Carol of the Bells.” In addition to making the video, she’s easily identifiable as the video’s star. She first shared it in 2016, and it’s been making the rounds online each December since then. But when Barstool Sports posted it, they didn’t credit its creator.

In December, they reuploaded one of my videos without credit. I asked for credit, was ignored, and filed a DMCA takedown. Twitter quickly took it down and IMMEDIATELY Barstool's social guy sends me an email. I don't respond. He emails again in early February. I don't respond. pic.twitter.com/GYLYOnHFXq

“People were responding to their tweet and demanding they credit me, but they weren’t responding publicly at all, even though they were still actively posting,” Bredouw says. “I responded myself. I asked why they couldn’t just retweet from my account if they wanted to share the video. Instead of doing that, they had uploaded it to their own account and then linked to their ‘Chicks’ account. The implication of the way they posted it was that my video–my face–was somehow involved in Barstool, and I could not want to be further from Barstool. Even if they had given me credit, I just didn’t want to be connected to them.”

Barstool Sports founder Dave Portnoy says that his social media team gets thousands of user-submitted videos sent in each week, and asserts that Bredouw’s video came to them through that process, submitted by someone who claimed to have the rights to the content.

“We try our best to make sure the people who send us videos have the rights before we post anything,” Portnoy says. “We make them fill out paperwork saying they own it. However it’s not a fool-proof plan, but our intent is never to steal other people’s content.”

In spite of Bredouw publicly responding to the post, making it clear that, if it had been submitted by anyone that person was not the legitimate rights holder, the video stayed up on Barstool’s account. Her next course of action was to file a Digital Millennium Copyright Act complaint with Twitter, which the service acted upon promptly. That caught Barstool’s attention.

“Twitter took it down within about 30 minutes. About 10 minutes after that, I get an email from some guy on Barstool’s social media team saying it was an accident,” Bredouw says. “He asks me to ‘remove the strike’ and offers to repost it and he’ll credit me this time. I didn’t want that, so I didn’t respond.”

Filing an official complaint that an account on Twitter is in violation of the DMCA isn’t the same as, say, reporting a stray nipple you spotted on Instagram. It’s a pretty serious process, and your complaint functions similar to filing a legal affidavit. It puts the complaint-filer on the hook for damages if they file a complaint when no infringement has taken place, so asking someone to reverse a complaint and state voluntarily that there has been no infringement, is a big deal, and not something Bredouw was interested in doing.

Christmas came and went and Bredouw assumed the matter was settled, until she heard from Barstool again on February 5. In this email, the Barstool representative again asked her to remove the strike, dangling the possibility of posting another one of her videos with credit (“for exposure”) as an exchange. She ignored his offer, and a subsequent one in which she was offered a $50 gift card to be used at Barstool’s own online shop.

“It’s just, like, I don’t want you to post my video, and I don’t owe you an explanation,” she says. “It’s mine and I can set that boundary. You stole something of mine, I reported it. This is exactly why that system exists, I didn’t abuse it, I’m not going to lie for you. Goodbye.”

Twitter has a limit on the number of DMCA notices that can be filed against an account before that account gets suspended. The social media platform, which was contacted for this article but declined to comment, does not publicly confirm the number of notices at which an account will be cut off, and it appears to vary somewhat case by case. In 2015, Recode reported, an SBNation account was temporarily suspended after 18 notices, but all 18 came from a single source, the NFL.

Bredouw believed that Barstool came back to her after weeks of silence because they were getting too close to a number of complaints that could get them kicked off the platform.

Then the full on harassment begins. I didn't screenshot all the messages before deleting but across my IG, my twitter, my email, my PODCAST'S INSTAGRAM, TWITTER, AND EMAIL they send me these messages. Hundreds. I block them. They find me again. Still, I don't respond. pic.twitter.com/bpPEtNupBJ

“My guess is they are trying to get their number down, so they’re circling back on old ones, trying to strong-arm content creators into removing their DMCA complaint,” she says. And strong-arm they did. When she didn’t reply to their email communication, Barstool began sending her private messages on her social media accounts.

“The next way they contacted me was via Instagram DM. It went to my ‘other’ folder, since obviously I don’t follow them. And then they had every one of their site accounts DM me, on my personal Instagram, my personal Twitter, my podcast Instagram, my podcast Twitter. They emailed me I don’t know how many times. When I blocked them, they would contact me from different accounts,” she recalls. “They went absolutely apeshit harassing me. I started to feel scared.”

Portnoy acknowledges now that his team went too far and should not have pursued the matter.

“Where Barstool went wrong is that, when she refused to respond and it became clear she had no intention of speaking with us, we should have ended it,” he says. “Unfortunately Barstool Sports has idiots in our company, much like many other companies, and those idiots acted like idiots. I regret our lawyer offering a $50 gift card to our store–not because it’s illegal in any manner, but it’s just so moronic and makes us look like assholes.”

Eventually the barrage of messages to Bredouw’s social media concluded, and again, she thought they might have given up. The company’s general counsel emailed her on March 4 with what would turn out to be his final offer, $2,000 to retract the complaint. When she didn’t respond for a few hours, she got a second message, this time from Twitter, stating that Barstool has filed a counter-claim, asserting that they acted fairly.

“The goal was always to find a way to remove the DMCA strike and find an amicable solution for all parties; 99.9 percent of the population will willingly work with you,” Portnoy says. “We found one person had no interest in a settlement and we were too stupid to let it go.“

Now it’s up to Bredouw to file a court order restraining Barstool from engaging in infringement and file proof of the court order with Twitter. If she doesn’t, they may be able to post her content all over again, as if nothing ever transpired.

The counter-claim hinges on the fact that Bredouw didn’t directly respond to any of Barstool’s offers after she filed the complaint, but the Twitter website does not state a requirement that parties discuss the complaint after it is made. And even Portnoy himself seems to understand that she wasn’t going to take any of their offers and just wanted the content removed.

“Miel had zero interest in finding a solution that would appease her, which is her right,” he says.

And Bredouw says her non-engagement with Barstool wasn’t because she wasn’t interested in actively defending her copywritten work, it was out of legitimate concern for her safety.

“I want nothing to do with this website. I don’t want their money. I am not interested in doing them a favor, and I’m certainly not going to perjure myself and lie and say I’m the one who was wrong, oops, never mind, so basically I’m just not going to give them the thing they want,” she says. “Based on my history, when you have an angry man approaching you in a private space, and you tell them you aren’t going to give them the thing they want, that doesn’t usually go well for me, as a woman.”

Official Statement about the internet crying about us stealing content. pic.twitter.com/Bnzh38TwD5

She didn’t interact with them because she wanted to avoid any additional contact, noting that, by finally going public with her story she has already been the subject of unwanted attention from not only Barstool’s staff, but a segment of the site’s 1.47 million Twitter followers. And while Breadouw has a significant following of her own (90k), she still feels that Twitter has abandoned her–and other content creators of traditionally underrepresented groups–in favor of a large corporate interest.

“Now it’s become a larger question of Twitter policy, and how they protect corporations and hurt small people,” she says. “Anyone who is subject to being harassed or oppressed on the internet has no ally in Twitter.”

Initially reticent to move forward with the court filings, Bredouw says she has been approached by several attorneys who think her case could set a significant legal precedent, and she is considering her options. She maintains she has no interest in collecting any money from Barstool, and the concern of a prolonged online campaign clearly weighs on her, but she thinks her case against Barstool would be a strong one, and might affect some kind of change that, she hopes, could protect other content creators in the future.

“I’m shocked they’re moving forward with this,” she says. “But they shouldn’t be allowed to use these intimidation tactics to profit off other people’s work. And I know I’m not the only person they have done this to, so we’ll see.”