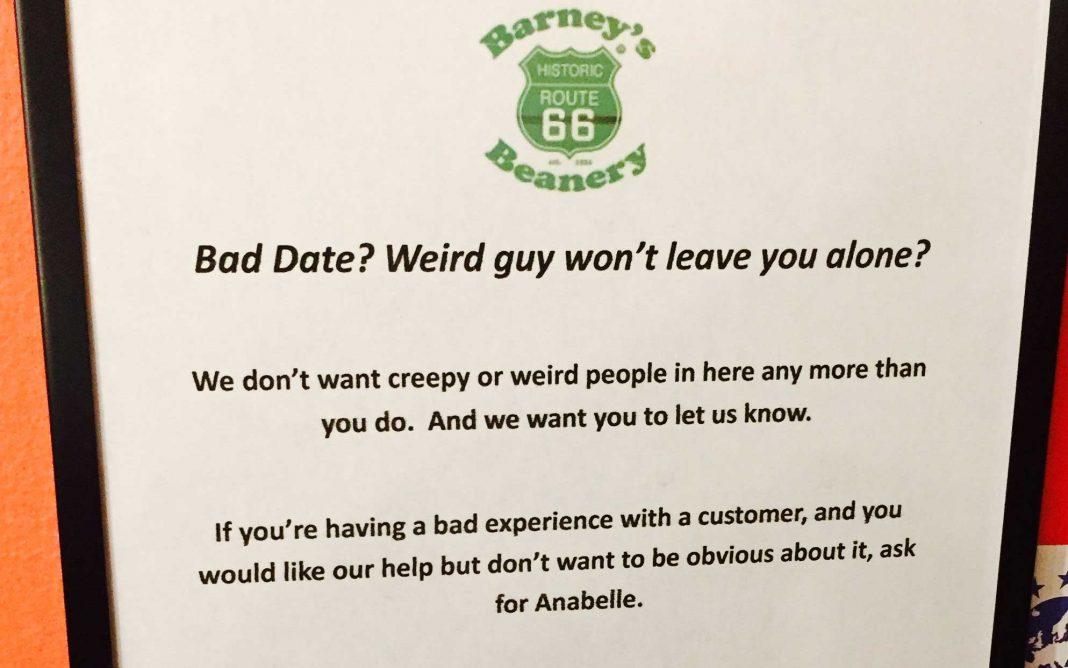 Barney’s Beanery may be steeped in history, but these days it’s trying something new: A sign in the bathroom provides women with a way to get out of an unsafe situation, whether that’s a creepy Tinder date, or harassment from another customer. The concept is simple. Ask a staff member if “Anabelle” is working, and they’ll get the manager to step in.

It’s a variation on an idea that’s been used at other bars, including a Hooters (where ordering an “angel shot” will alert the bartender to escort you to your car, call a ride, or notify the police) and a bar in Lincolnshire, England (which encourages women who feel threatened to “ask for Angela”).

i saw this in a toilet and thought it was important and should be a thing everywhere not just lincolnshire !!!! pic.twitter.com/oO45I7gaJL

Barney’s Beanery plans to roll the campaign out to all of its establishments soon. In the month that the sign’s been posted in the West Hollywood location, the phrase has already been used a couple of times, says regional manager A.J. Sacher.

“We’re still sort of figuring it out, because once the manager is called, every situation is going to be a little different,” says Sacher. “It’s really just about checking in and trying to get a read on what’s going on.”

Before they posted the sign, Sacher says they polled the staff and received mostly positive feedback about the idea, and whether or not they thought it would be the kind of thing they’d use personally.

Right now, the signs are only in the women’s bathroom, but that may change. People of all genders might need assistance getting out of an unsafe situation, and having a sign in both restrooms (possibly with different messages) might serve as a deterrent.

“We’ve had some back and forth because originally people were thinking ‘Let’s not put a sign in [the men’s bathroom], because we don’t want creepy guys to know what this means,’” says Sacher. “But then there’s the argument that the more people that know, the better, because then they won’t be creepy in the first place.”

Some have expressed concern that sharing these codes might be dangerous, but others think the importance of publicizing these campaigns trumps any downside—especially if more establishments catch on. After all, bars should be safe for everyone.