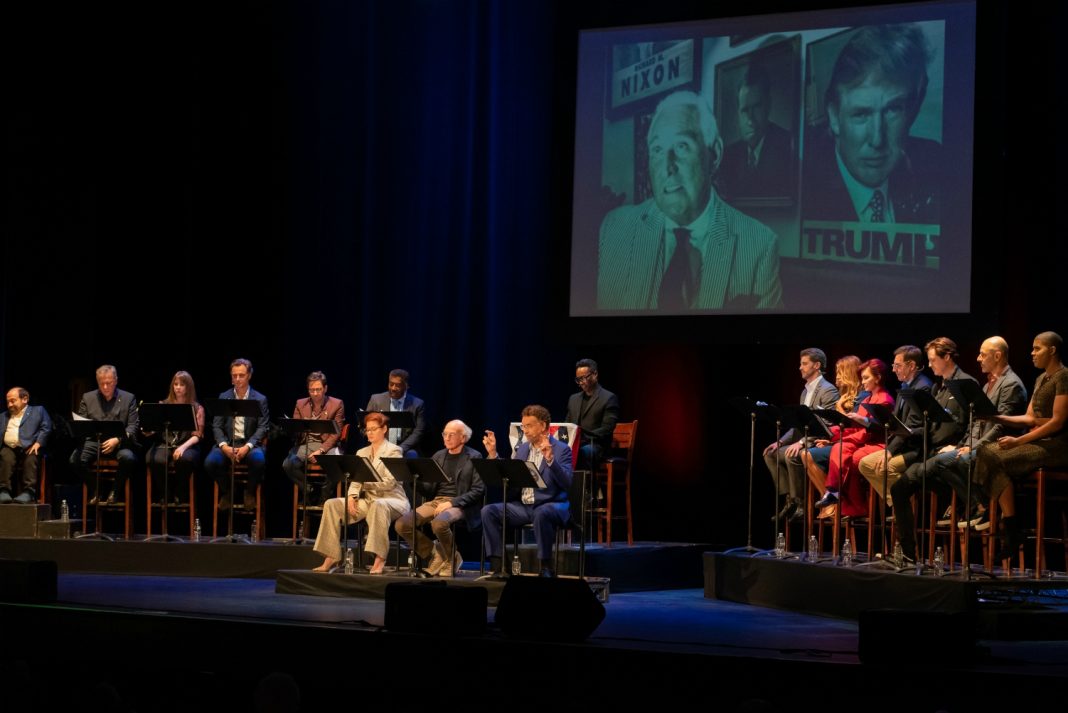 Courtesy PAC for a Change

“OK, sexy liberals, give it up!” is how radio show host Stephanie Miller warmed up the crowd Monday night at the Saban Theatre, where former senator Barbara Boxer and her PAC for a Change helped stage a live reading of the Muller Report, aptly titled You Can’t Make This Sh*t Up: Selected Readings from the Mueller Report.

About a thousand Hollywood liberals who came out (when they’d usually be home glued to Rachel Maddow) to watch a cast that included Tony Goldwyn, Paul Reiser, Sharon Osbourne, Ernie Hudson, Poppy Montgomery—and those with top billing, Debra Messing as Donald J. Trump, Larry David as the narrator, Brian Stokes Mitchell as Robert Mueller, and the fabulous Billy Porter as, well, the fabulous Billy Porter. Porter brought down the house from minute one, opening the comedic reading by belting out America the Beautiful accompanied by musician Stephen Trask.

“The Mueller Report is no laughing matter,” Boxer said backstage after the show. “It’s deadly serious stuff. I read it four times. It’s simply obstruction in plain sight. But Debra Messing cracked me up so much as Trump—doing that New York accent. I told her, ‘Debra, if you really were Donald Trump, I would have to like you.’”

The show was produced by Suzi Dietz, a veteran Broadway and Pasadena Playhouse producer, and Steve Saporito, and executive produced by Marta Kauffman, who helped create a little show called Friends. According to Boxer, Larry David was the first star on board. “We recruited Larry early on, which is how we got everyone else,” Boxer admitted. “Paul Reiser’s also been a longtime supporter of my PAC.” The rest of the casting was put together by Dietz. David narrated in a tone that landed somewhere between his Curb Your Enthusiasm curmudgeon and his SNL version of Bernie Sanders.

Boxer took to the stage before curtain to explain to donors and those sexy liberals , the purpose of her PAC and the event itself: “We’re raising money so we can take back the Senate in 2020! Keep the House! And bring sanity to the Oval office!” Of course, that got the biggest roar of the night.

Of course there was lots of hilarity in the staged reading itself, including Laraine Newman, Paul Reiser, and Tony Goldwyn reading parts in thick Russian accents while wearing Russian fur hats. Dan Bucatinsky as Julian Assange popped on a white feather wig. The Don Jr. character—played by Danny Woodburn—said little, but mimed big game hunting. Billy Porter pretty much did what he does on Pose, calling out the categories —“Obstruction of Justice!!!”—as if he were emceeing a New York ’80’s drag ball contest.

A little post-show soiree was held during which the petite Boxer, like a true larger than life politico (House of Representatives 1983 to 1993, Senate from 1993 to 2017), shook hands, took pictures, and did interviews for a couple hours in a black sequin top and black silk pants. “I keep waiting for Trump to give me a bad nickname!” she laughed. “I never expected to be doing this when I left the Senate. But we all have to now. Democracy’s at stake.” She showed a few reporters digital ad campaigns her PAC’s created to target Mitch McConnell and Lindsay Graham as “bad news,” to attempt to kick both to the Senatorial curb in 2020.

“I don’t think there’s an option about doing things like this,” she mused. “There’s so much at stake!”

PAC for a Change’s next event is a party on Tuesday, March 3, 2020—aka Super Tuesday. It’ll be here before we know it.

Barbara Boxer Enlists Larry David, Billy Porter, and Other Stars for a Live Reading of the Mueller Report