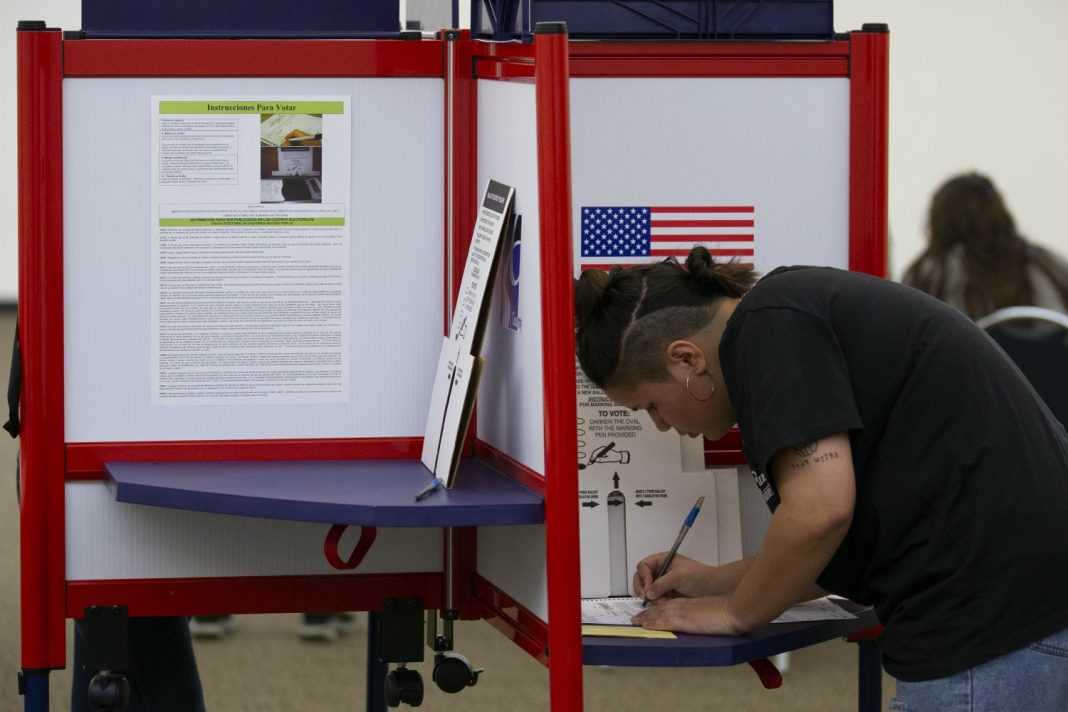 Yesterday California voters were given a chance to expand rent control, advocate for farm animals, and repeal a gas tax by way of ballot referenda. Here’s how each proposition fared.

This measure would authorize the state to sell $4 billion in bonds so the cash could go into housing programs. Of that, about $2 billion would be dedicated specifically to giving local governments low-interest loans to build or renovating affordable, multi-family apartment buildings, and another $1 billion would go specifically to programs that provide home loan assistance for military veterans. The rest of the money would be put into existing housing programs already in effect across the state.

Passed or rejected? This one hasn’t officially been called, but according to the Sacramento Bee, it’s leaning toward passing, with 54 percent of voters saying yes.

California created the so-called “Millionaire’s Tax”–a one percent income tax that hits residents with annual incomes over a million dollars–in 2004 with that year’s Prop 63. The plan was to allocate that money to create and expand mental healthcare services. In 2016, the legislature moved to use some of the revenue raised from Prop 63 to build housing for homeless individuals with mental illnesses, but a lawsuit hit the pause button on that, saying the money was supposed to go only to treatment, not construction. A “yes” vote on Prop 2 commits $120 million per year to create permanent supportive housing for mentally ill homeless people across the state; a “no” vote throws it back to the courts to sort out what the wording of Prop 63 really intended.

If you cast a ballot back in June, you were asked to weigh in on Prop 68, a $4.1 billion fund for water and environmental projects. November’s Prop 3 sounds similar, but adds an additional $8.9 billion. Except, there’s some key differences between 68 (which passed) and 3. Prop 68 came through the state legislative process; Prop 3 arrived on the ballot by a public campaign, backed in part by large agribusiness interests who will benefit from the projects funded by the measure. The Sierra Club, which backed Prop 68, strongly opposes Prop 3 and suggests a “no” vote. Proponents, however, say that Prop 68 favored urban and coastal concerns over the desires of inland and farm communities, and Prop 3 is their attempt to address that imbalance.

Passed or rejected? This one hasn’t been called yet, but it’s trailing—with 94 percent of precincts reporting, 52 percent of voters voted no.

The majority of the $1.5 billion in funds authorized by the passage of this measure would go to building, updating, and equipping private, nonprofit children’s hospitals that offer healthcare to kids covered by qualifying government programs, like the California Children’s Services program. Money would also go toward general hospitals with dedicated children’s treatment facilities and five University of California centers focusing on pediatric care.

Passed or rejected? Passed. Opponents argued that the proposition would primarily benefit the very hospitals that funded the campaign, but it’s hard to vote against pediatric care.

Prop 5: Changes Requirements for Certain Property Owners to Transfer their Property Tax Base to Replacement Property

This is a little complicated, so bear with us. Basically, it gives a break on property taxes to disabled individuals or those over 55 years old when they’re ready to move. Nonpartisan analysis website ballot.fyi offers this hypothetical to explain: “Say your 56-year-old neighbor bought her home in 1980 for $110K, and you just bought the place next door for $1M (aka a steal in SF). Even though you live in very similar homes, she’ll pay $2,200 in taxes this year while you pay $11,000.” That encourages your neighbor to stay in her house rather than move and get hit with a higher tax bill. Prop 5 would ease restrictions on where and how many times that neighbor can move while still getting a discount on property taxes. The theory goes, that lessens the incentive for empty-nesters to hang on to the big houses where they raised families, thus putting more houses on the market, and maybe, possibly, doing something to cool home prices. Critics (like, say, the editorial boards of the Los Angeles Times, San Francisco Chronicle, and San Jose Mercury News) say similar tax breaks already exist and any additional reductions in property tax revenue is an unfair burden to local governments that depend on that money to provide services.

Passed or rejected? California voters rejected Prop 5, which was funded largely by the California Association of Realtors. Opponent Rep. David Chiu argued that the proposition wouldn’t have added housing and therefore would not have addressed the housing crisis in any meaningful way.

Remember last year, when state lawmakers approved the “gas tax” to fund repairs to highways and roads and invest in public transportation projects? Republicans in Sacramento were pretty unhappy with that, and now they’re trying to undo that law with a ballot initiative. A “yes” vote on this repeal measure might save individuals 12 cents per gallon on standard gasoline–by cutting around $5 billion a year in funding for transit infrastructure. The referendum writers also aren’t taking chances with the legislature again: Prop 6 includes provisions that any fuel tax or vehicle fee increase in California’s future would have to go to the voters (who have historically been reticent to vote to raise their own taxes, even to fund services they rely upon).

Passed or rejected? 55 percent of voters said no to repealing the gas tax, despite that the vote yes campaign was endorsed by big-name Republicans including Wisconsin’s Paul Ryan.

California has followed the (almost) nationwide Daylight Savings Time to Standard Time shifts since a ballot initiative approving the adoption of the then-new concept was passed in 1949. Passing Prop 7 would not immediately can the idea, but it would open the door to making Daylight Time a year-round thing–if that was to be approved by two-thirds of the California legislature, and then also approved by the United States Congress. Why do it? Proponents think that permanently starting the day an hour earlier could have implications for energy conservation–the earliest the sun would ever set in the winter would be 5:50 rather than 4:50. Opponents worry about an increase in traffic accidents as winter commuters head to work in darkness, and cite the possible cross-country confusion of California being three hours off from Eastern Time part of the year, but only two hours off at others.

Passed or rejected? Passed. As the L.A. Times explained in its endorsement of the measure, “Proposition 7 won’t stop the clock-changing; it would just allow the discussion to continue about the merits of doing so, as well as making the procedural changes needed to allow a future shift to permanent daylight saving time. It’s a debate worth having, and for that reason we urge voters to say ‘yes’ on this measure.”

Passing Prop 8 caps how much certain dialysis clinics can charge patients at 115 percent of a combination of “direct patient care service costs” plus “healthcare quality improvement costs,” prohibits the clinics from discriminating against patients depending on their payment method, and institutes fines and penalties for failing to follow the rules. And while this all might seem pretty niche to voters that don’t interact with the dialysis industry, it actually ended up on the ballot as a result of a bruising and on-going dispute between the state’s two largest dialysis clinic chains and the labor union SEIU-UHM West, which has been blocked from unionizing workers at the clinics since 2016.

Passed or rejected? Voters did not approve Prop 8, which was opposed by dialysis clinics and the California Republican Party.

The Costa-Hawkins Rental Housing Act, passed in 1995, bans cities from establishing certain kinds of rent control–including prohibiting cities from enforcing rent control on apartments and single-family houses built after 1995. Prop 10 seeks to overturn that act. This initiative has seen some of the biggest spending on campaign ads of the season, so you may have heard the basic points for and against. Eric Garcetti has been a vocal proponent of Prop 10, arguing that city governments should be free to make their own rules about local rent control. Opponents worry that landlords and developers will be disinclined to build new rental units and might even go to great lengths to demolish existing ones if they think they’re going to be stuck with tenants paying well below market rates.

Passed or rejected? By a rather wide margin (61 percent to 38 percent), voters rejected Prop 10. A successful opposition campaign argued that the proposition would negatively affect home values.

This one does pretty much what the title implies. If passed, employees of for-profit private ambulance companies would be required to stay on-call via mobile devices during their meal and rest breaks; if the break is interrupted by a call, that one wouldn’t be deducted from the total number of breaks an employee is required to be given per shift. In exchange, the companies have to provide mental health services to workers and provide specialized training for the job.

Passed or rejected? Upward of 60 percent of California voters said yes. EMTs will have to remain on-call during breaks (like police officers do), but will also be paid to do so.

Prop 12 sets minimum standards for the space an egg-laying hen, pig, or veal calf needs to have on a commercial farm. In the case of a hen, for example, there would need to be one to one-and-a-half square feet per animal–enough space to stand up and lay down–and would require every egg sold in California to be “cage free” by 2022. Meat from animals raised below the standards would be ineligible to be sold in California starting in 2020, even if the animal was raised outside the state. Prop 2, in 2008, laid the groundwork for these rules–but Prop 12 adds specific measurements to a law that some have criticized as “too vague,” and officially authorizes the California Department of Food and Agriculture and California Department of Public Health to be in charge of enforcement.

Passed or rejected? Voters passed the measure. Farm animals will get more space to live…while they live.

RELATED: Can the Los Angeles We Know Survive the Death of Its Trees?

What You Learn Knocking on Doors on the Outskirts of L.A.