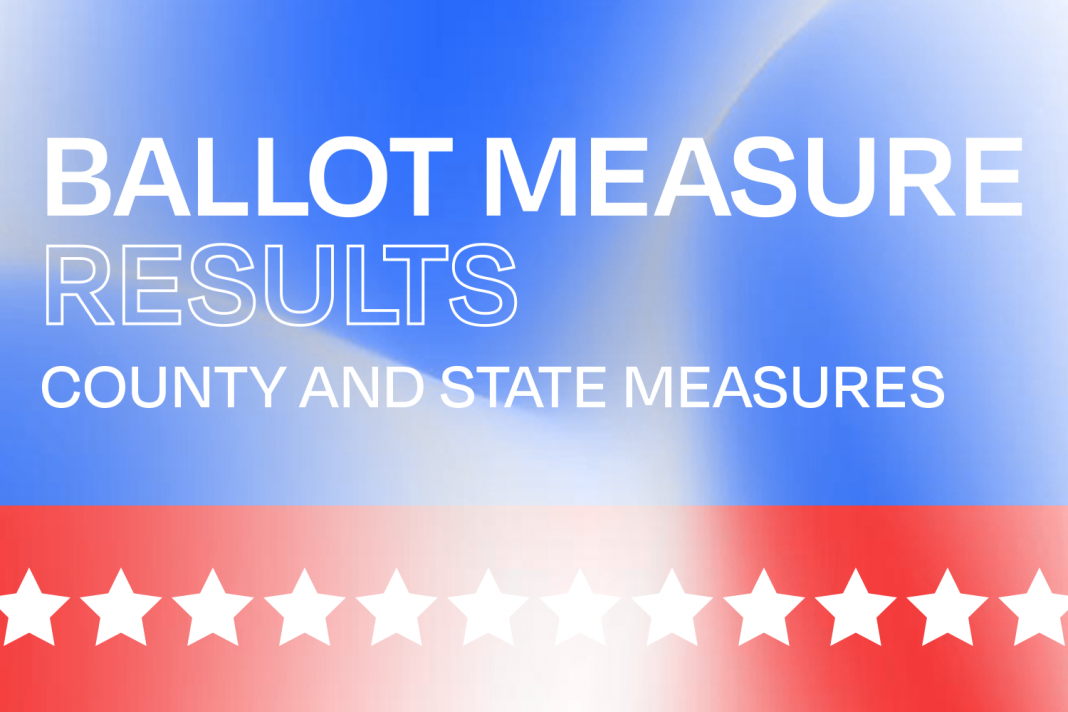 Check back for updated local election results as they become available.

COMMUNITY INVESTMENT AND ALTERNATIVES TO INCARCERATION MINIMUM COUNTY BUDGET ALLOCATION. Shall the measure, annually allocating in the County’s budget no less than ten percent (10%) of the County’s locally generated unrestricted revenues in the general fund to address the disproportionate impact of racial injustice through community investment and alternatives to incarceration and prohibiting using those funds for carceral systems and law enforcement agencies as detailed in the ordinance adopting the proposed charter amendment, be adopted?

ALLOWS DIVERSITY AS A FACTOR IN PUBLIC EMPLOYMENT, EDUCATION, AND CONTRACTING DECISIONS. LEGISLATIVE CONSTITUTIONAL AMENDMENT. Permits government decision-making policies to consider race, sex, color, ethnicity, or national origin in order to address diversity by repealing constitutional provision prohibiting such policies. Fiscal Impact: No direct fiscal effect on state and local entities. The effects of the measure depend on the future choices of state and local government entities and are highly uncertain.

AMENDS CALIFORNIA CONSTITUTION TO PERMIT 17-YEAR-OLDS TO VOTE IN PRIMARY AND SPECIAL ELECTIONS IF THEY WILL TURN 18 BY THE NEXT GENERAL ELECTION AND BE OTHERWISE ELIGIBLE TO VOTE. LEGISLATIVE CONSTITUTIONAL AMENDMENT. Fiscal Impact: Increased statewide county costs likely between several hundreds of thousands of dollars and $1 million every two years. Increased one-time costs to the state of hundreds of thousands of dollars.

RESTRICTS PAROLE FOR CERTAIN OFFENSES CURRENTLY CONSIDERED TO BE NON-VIOLENT. AUTHORIZES FELONY SENTENCES FOR CERTAIN OFFENSES CURRENTLY TREATED ONLY AS MISDEMEANORS. INITIATIVE STATUTE. Limits access to parole program established for non-violent offenders who have completed the full term of their primary offense by eliminating eligibility for certain offenses. Fiscal Impact: Increase in state and local correctional, court, and law enforcement costs likely in the tens of millions of dollars annually, depending on implementation.

EXPANDS LOCAL GOVERNMENTS’ AUTHORITY TO ENACT RENT CONTROL ON RESIDENTIAL PROPERTY. INITIATIVE STATUTE. Allows local governments to establish rent control on residential properties over 15 years old. Local limits on rate increases may differ from statewide limit. Fiscal Impact: Overall, a potential reduction in state and local revenues in the high tens of millions of dollars per year over time. Depending on actions by local communities, revenue losses could be less or more.