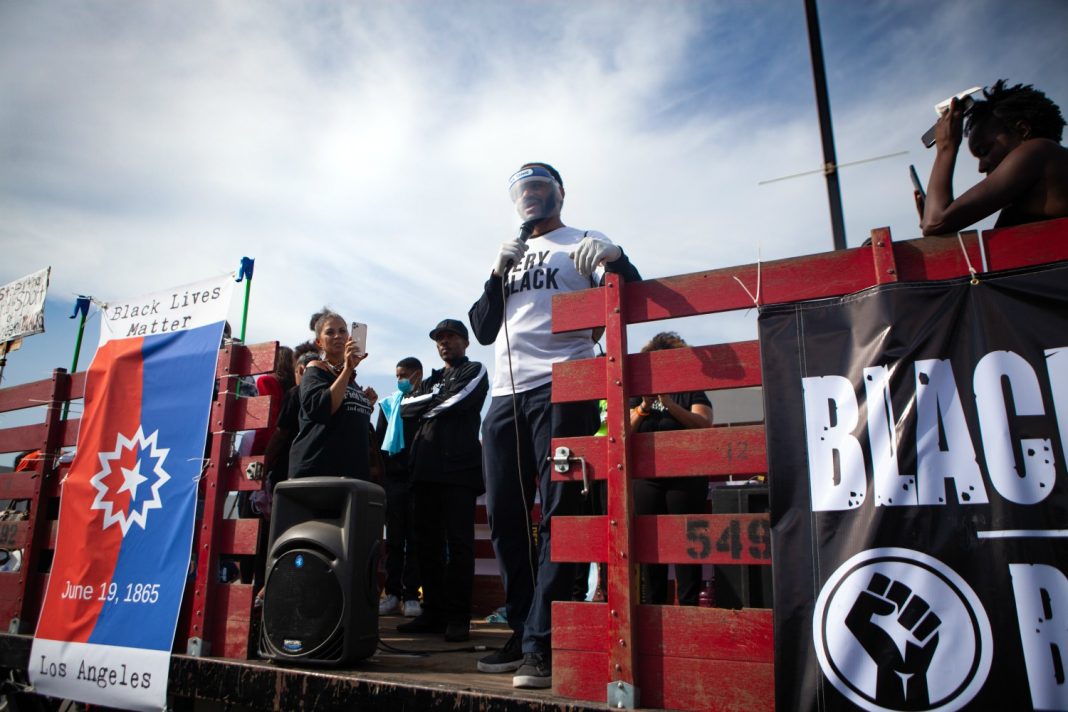 After nearly three weeks of unbroken protests following the murder of George Floyd in Minneapolis, activists and protesters gathered in South Los Angeles to draw attention to the threats of gentrification and disinvestment in L.A.’s historically Black communities. Activists with Black Lives Matter Los Angeles organized a march down Martin Luther King Jr. Boulevard and gathered at Baldwin Hills Crenshaw Plaza, the site of recent community opposition to a developer’s plan to purchase the property and convert a chunk of it to office space.

For many residents, the mall represents economic autonomy. “It’s a part of the community,” says Cynthia Rumford, a local who attended Friday’s protest. “It’s more than just shops. When it’s thriving, it represents economic stability and it gives the residents a place to shop without having to drive miles and miles away.”

Christian Beckley, a 34-year-old local who has lived in the area her entire life, remembers spending her childhood at the mall. “Coming here with my friends, meeting at the movies, going to the mall to go eat in the food court,” she says. “It’s definitely nostalgic for sure.”

Following global retail trends, the plaza has fallen on hard times. Two anchor stores, Sears and Walmart, have left in recent years, leaving about a third of the mall’s space empty. In April, development group CIM agreed to pay more than $100 million to buy the mall, announcing plans to turn it into a mixed-use complex with office space. Earlier renovation plans included construction of new apartments and low-income housing, which CIM scrapped.

“What CIM proposes is a hostile takeover of the most iconic African-American retail space west of the Mississippi River and the construction of a project that would ignore the community’s needs and wishes and possibly wipe out dozens of minority-owned businesses that are now tenants in the Baldwin Hills Crenshaw Plaza mall,” said Pastor William D. Smart Jr., president of the Southern Christian Leadership Conference of Southern California, in a June 3 statement.

On June 15, in the midst of a national uprising against police brutality and systemic racism, CIM announced its withdrawal from purchasing the plaza. “CIM has concluded that the community, the Mall, and CIM are best served by us stepping aside,” the group posted in a statement on Instagram. The group also denied having business ties to the Trump and Kushner families, which had been a point of contention for activists, despite news reports that say both families have benefitted from CIM’s dealings.

CIM’s departure was a victory, but activists have remained focused on the next steps for the community, envisioning different ways the space could serve Black L.A.

“Ideally, we’d get something that incorporates certain vendors into the mall that are centered on building community and centered on addressing Black needs in Crenshaw and other parts of Black L.A.,” says Faith, who did not provide a last name. Faith cited the need for more resources to improve community health, like community gardens and educational resources.

Damien Goodmon, executive director of the nonprofit Crenshaw Subway Coalition, did not take time to revel in the victory when he spoke to the crowd on Friday. “Today, we have this beast—this beast known as gentrification that seeks to push us out,” he said. Friday’s protests also centered on a 2019 police-involved shooting at the mall, which claimed the life of 30-year-old Grechario Mack.

Property values and rents have risen across California and Los Angeles, prompting people to venture farther into traditional minority strongholds like Echo Park, Boyle Heights, and Inglewood. According to Zillow, the average South L.A. home price in 2015 was $348,000. Today, it’s $536,000.

“The people that have a lot more money can push out the renters, can outbid the longterm middle class workers,” Goodmon says. “It’s not about keeping folk out, it’s about making sure the people that are here remain here.”

RELATED: They Held on Through the Pandemic, and Now L.A.’s Black-Owned Bookstores Are Thriving