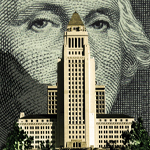 On the surface not much has changed. City Hall looks as imposing as it did when its doors opened in 1928. Cops are still patrolling, firefighters are still responding, trash still gets picked up once a week, and potholes, by and large, still get filled. But make no mistake: L.A. is different, and not in a good way. Desperate to close massive budget deficits for each of the past five years, city officials are hollowing out government before our eyes. They’re mainly doing it on the sly by borrowing money, deferring maintenance and overtime, benefiting from onetime revenue gains, and moving pockets of available cash from department to department. Most of all they’re eliminating thousands of jobs through retirements, transfers, and hiring freezes. Excluding police, L.A.’s workforce has been cut by 21 percent over the past half decade, to around 18,000. Not since Tom Bradley stepped down as mayor in 1993, when the city had 400,000 fewer people, has civilian employment been so low.

This is more than just a few numbers moving in the wrong direction. What’s at stake is nearly every city service that people living and working in Los Angeles take for granted each day. The fire department, for example, has lost so many positions that response times are now longer for fires and medical emergencies. Recreation centers have been forced to eliminate day care and seniors programs while cutting Sunday and holiday hours. The Department of Transportation won’t accept new requests for preferential parking designations because it doesn’t have enough people to manage the extra work. Even good news comes with a catch: L.A. is repaving more streets than ever before, but because a different department is responsible for restriping lanes and painting STOP markings on the road—and because money in that department is short—the work often gets delayed for weeks, creating traffic hazards.

“You see a government that’s struggling to provide basic city services,” says city controller and mayoral candidate Wendy Greuel, who has lost 21 percent of her staff since she took office in July 2009. Greuel is in full campaign mode when describing L.A.’s crumbling infrastructure and degradation of services, but I heard the same lament, both on and off the record, from officials not running for anything. Miguel Santana, who oversees budget matters as the city administrative officer and whose candid comments haven’t always been well received among lawmakers, describes the cuts as a form of crisis management that offers immediate relief but no long-range cure. “In an effort to keep the patient alive, we did things that we normally wouldn’t have done,” he says.

No portion of city government has been spared, including the police department. While the number of sworn officers remains around 10,000, a level that Mayor Antonio Villaraigosa and members of the city council refuse to budge on, funding for police overtime has been all but wiped out. Instead the department has implemented a system that forces officers to bank their extra hours as well as take days off in lieu of cash. Chief Charlie Beck acknowledges that the arrangement “is the equivalent of having between 400 and 700 fewer officers at any given period.” (Commanders have been instructed not to reduce shift sizes on Saturday nights and during other peak periods.) Another problem: The no-cut mandate doesn’t apply to the department’s back-office operations, which range from fingerprint analysis to clerical chores. There’s also a shortage of 911 operators. “We’ve been able to keep our response times at acceptable levels,” Beck tells me, “but they’re not what they would be if we were fully staffed.”

Budget deficits happen in the best of cities and during the best of economic times. Inevitably some years will have too little money coming in from taxes or other revenue and too much going out in salaries, public works projects, and retirement benefits. Modest differences can be resolved. In L.A., however, shortfalls of $200 million or more have become routine—what economists refer to as a “structural deficit.” Consider a home owner who has a monthly mortgage of $3,200 and a monthly income of $3,000. All manner of scrimping will leave him behind each month—and the more he borrows to pay his bills, the higher his debt will be. It’s a hopeless spiral.

Los Angeles faces a similar kind of spiral. The recession and sluggish recovery have kept tax receipts way too low, while sharply higher pension and health care obligations, along with the general costs of operating a very complicated city, have kept expenses too high. Some efforts have been made to reduce the biggest culprit—retirement benefits—but what’s needed is a 401(k)-type pension program that won’t make a big dent in the budget. Understandably the unions are balking at such an approach; they expect the city to abide by existing contracts. Except that the city can’t afford to do that. As it is, the deficit in 2012 was about $230 million, and the imbalance is expected to grow—to $342 million in 2013 and $427 million in 2014. And unlike the federal government, where red ink is added to the existing debt, most cities and states must find a way to balance the books.

Ther municipalities, particularly in California, are also being squeezed, with massive deficits that stem largely from a weak real estate market and unwise decision making prior to the recession. The Northern California city of Vallejo exited from bankruptcy protection late last year; in June another city, Stockton, was forced into a similar Chapter 9 filing, resulting in reduced benefits to retirees and suspended payments to creditors. L.A. is not a probable candidate for bankruptcy—emergency funding is likely to be available in a worst-case scenario, and besides, the political fallout would be unacceptable to anyone in office. But Santana sees Stockton as a cautionary tale. “Right now I have no idea how we’re going to solve the deficit next year. All of our solutions are pretty much exhausted,” he says. “Maybe the public needs to tell us, ‘We don’t want you to do certain things anymore.’ ”

Of course the public will never tell them that. People don’t want to see their services disappear, and surveys have shown a general skepticism about “sky is falling” pronouncements. Instead of confronting the difficult choices that must be made (Should the fire department charge for ambulance services? Is it necessary to have a housing department? Can foundations or even private businesses operate the parks?), the temptation is to blame city officials for not budgeting more efficiently. There’s also the notion that buckets of cash can be quickly generated by uncovering waste, fraud, and abuse as well as by selling off city assets such as parking garages. Greuel has been pushing for these solutions in her campaign, but they’re a lot tougher to implement than it would appear, and remuneration is often marginal. Think about it: If it’s so easy to sell off a few buildings or collect on five-year-old parking tickets, wouldn’t they have done it by now?

L.A.’s budget is in fact devilishly hard to cut. Police and fire take up more than seven out of ten dollars, and there’s not much give in either area. Charter-mandated funding requirements for specific programs and departments, such as libraries, are another nonnegotiable cost. Of L.A.’s $6.9 billion budget, less than $400 million is considered discretionary. That has to cover everything from animal services to transportation, and no amount of trimming in those areas can pare down deficits year after year. The easiest—and some would argue least effective—means of cutting costs is through the wholesale elimination of jobs. That’s different from actually firing an employee, which rarely happens because the public unions apply enormous pressure on the city council (only one employee was let go last year and none so far this year). Rather than layoffs, the workforce is reduced mostly through attrition. As a department head told me, “We couldn’t decide who to eliminate, so we left it up to the city workers to decide.” The willy-nilly approach means some departments lose a disproportionate number of experienced employees. Santana says his staff was reduced so much that a group of retired city accountants came back on a temporary basis. “It’s piecemeal,” says Greuel, “and that’s the problem.”

Accounting sleight of hand is also being used to adjust the numbers. Earlier in the year the Department of Recreation and Parks was instructed to pay for its own energy and trash collection, even though such expenses had been taken out of another part of the budget for decades. These so-called chargebacks total $43.8 million in the upcoming budget and have, in effect, put the department in the red. Park supporters are pushing for a ballot measure that would provide the funding to keep the lights on. “They’re not even getting the best DWP rates,” says Steve Soboroff, who was president of the Recreation and Parks Commission when Richard Riordan was mayor. “The budget doesn’t address the right priorities. It addresses political priorities and union priorities…. Unless there are changes, the city is going to be so unlivable that people are going to have to leave. The city has to start setting priorities that involve quality-of-life issues.”

You won’t get much argument from City Councilman Paul Krekorian, who this year replaced Bernard Parks as chairman of the Budget and Finance Committee. Representing the southeastern portion of the San Fernando Valley, Krekorian is low-key, thoughtful, and from what I hear, more open to divergent views than his predecessor. When I meet him for lunch a few days before his panel begins hearings on the budget plan, he stresses that patchwork solutions only delay the fundamental decisions about what a city should offer its citizenry. “Yes, trash does get picked up,” he says, “but we don’t have the same weed abatement or graffiti abatement or bulky-item pickup or tree trimming or any of those things. People have noticed a difference.”

With much of the old system in tatters, scattered efforts have been made at reinvention and reform. One idea is performance-based budgeting, in which departments receive funding based on what they truly need—measured by a battery of standards—as opposed to what they routinely received in the past. Basic stuff, to be sure, but it gets to the heart of the challenge: determining where cuts can be handled with the least pain. Santana acknowledges the benefits of less bloat, just as government critics have preached for years.

Change, however, does not come easily for entrenched bureaucracies. On May 21, the L.A. City Council voted unanimously to approve a $7.2 billion budget for the upcoming fiscal year. Getting past the deficit involved nearly $70 million in spending cuts, $10 million from higher parking fines, $76 million in additional revenue that still has to be approved by state and federal officials, and the elimination of more than 400 vacant positions. The 209 layoffs that the mayor proposed will not happen, at least this year. Budget officials scraped together enough money to keep those folks working. In other words, L.A.’s new budget looks a lot like the budgets of recent years—a hodgepodge of short-term solutions that fails to confront a city government that’s being dangerously downsized. Over the next four years, according to the city’s budget office, expenses are projected to grow 4.7 percent while revenue is projected to grow 2.3 percent. You can’t fudge those numbers forever, and that’s the point: Everybody says the right things about wanting to save Los Angeles, and yet no one has a clue about how to do it.