Home Uncategorized Back Draft: What Outgoing LAFD Chief Brian Cummings Can Teach Us About... 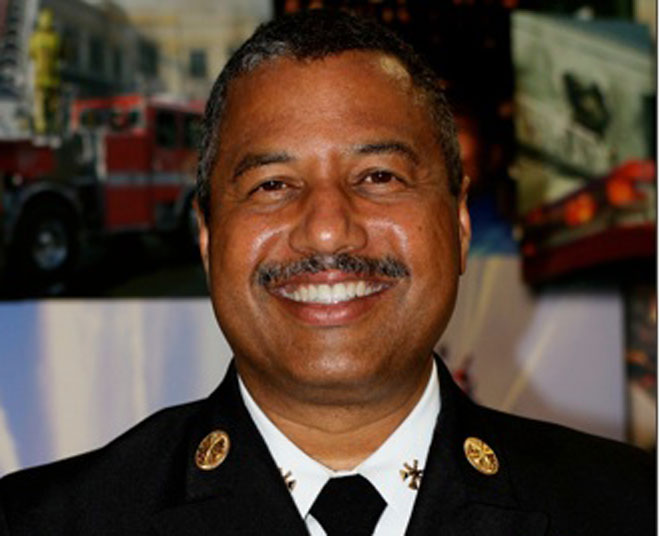 When I sat down with Brian Cummings to discuss his role as Fire Chief of the LAFD last spring, the second-generation firefighter told me that the goal of his tenure was to get L.A. so well prepared for a large-scale disaster that “the world looks at us and says I want to be like Los Angeles.”

We may get there yet, but not with Cummings as our Fire Chief. Eric Garcetti’s office announced last week that Cummings will retire in early 2014. Former LAFD captain James Featherstone will begin serving as Acting Chief on the first of November.

Looking back on my conversation with Cummings, there were signs of trouble but not fatigue. The president of the Fire Commission had just publically opposed Cummings’ request to add 11 ambulances and shift around personnel to staff them—a solution the chief, under media fire for slow LAFD response times and the reporting of some faulty data in 2012—was confident would make his department more nimble and efficient.

Cummings was open with me about the political and financial challenges he was facing, but he was optimistic and gracious, and focused on implementing the changes he believed would solve the root of the department’s problems.

Now that task will fall to someone else, but the insight Cummings shared about the complexities of his job, the ways in which the LAFD has outgrown its current staff structure, the budget crisis it faces, and the technology it needs now offers a unique perspective on a vital city service undergoing changes that affect four million residents. Here are select highlights from the conversation that shed the most light on this shifting situation:

Where do you want to see the department in the next 12 months?
I’m looking longer-term. I’m looking at the next five years. The Los Angeles Fire Department is really undergoing a sea change…

We are an emergency medical service provider that maintains a really robust capacity of tools, training, and talented people to handle risks [like] fires, floods, hazardous materials, civilian search and rescue. We have to maintain the proficiency at those low-frequency, high-risk events, but we have to be focused on our core business—which is emergency medical service—as we move forward.

I’ve read up on your proposal, and I’d love to hear from you why it is important that we reallocate resources from the trucks to the ambulances. What brought you to that conclusion?
We are constantly looking at our data and the frequency of calls for service that we go on and where our resources are allocated. Our budget in 2008/2009 was $561 million. Over the course of two years we were cut down to $472 million, so we lost eleven engine companies, seven truck companies, and some ambulances. With that reduction of staffing and an increase in call load everyone was busier and we didn’t have the resources to respond to the calls that we needed, so we had aerial ladder trucks responding to a lot of emergency medical service calls. What I need is ambulances to respond to those.

Because those trucks might not be equipped properly?
They are equipped properly for everything except transport, but it [causes] wear and tear on this huge 50-ft long vehicle going through the streets when what I need is an ambulance with two EMTs on it. So we came up with a solution that would keep those fire resources—those aerial ladder trucks—available and give me the right resource to respond to the emergency medical service calls. Reconfiguring the staffing accomplished that.

How do you respond when someone who isn’t familiar with the stats says, ‘I’m scared there aren’t enough firefighters on trucks?’
In 2012 we went to about 4,500 structure fires in the city of Los Angeles—that’s a lot of fires. In the next six days I’ll go to 4,500 emergency medical service calls. Fires are dangerous and we want to make sure we have enough people to get there and handle them correctly.

We always make sure we dispatch enough companies to a fire—multiple companies—so that we get the number of firefighters on scene to handle an incident. The effective response force is always dispatched at every incident. So we’re keeping our firefighters safe, we’re making sure we’re getting enough people there to handle those incidents, and those ambulances? Those 11 ambulances [I’ve requested]? Those are firefighter EMTs on them. They go to fire calls too. And when they go to fire calls they can pull hose, they can haul ladders, they can do all those things as well. So we’re not just using them for the emergency medical service, we’re using them for fire calls and urban search and rescue and everything else as well.

It’s somewhat rare for a Fire Chief and the Fire Commission to be publically at odds.
I’d like to start by saying we have a fantastic Fire Commission. There are some very talented people that bring a very diverse background and skill sets to the department, and all of them want the department to be successful as we move forward. What may appear to be conflict is just asking difficult questions, and I’m glad they ask those questions so that we come to the best answer all the time. What motivates me is the same thing that motivates them: we want the department to be successful. It’s nice that we challenge each other to make sure the public is getting the best fire department they can have.

[When it comes to response times] is there a tech tool you wish you could purchase?
There is. Unfortunately it’s expensive. We have money for our automatic vehicle location system, so we are moving forward with that so we will be able to identify where all of our fire engines and ambulances are and dispatch the closest resource to an incident. That will help us with response times.

We have an RFP out and we will be purchasing a new station learning system and that’s the actual connection [between] the dispatch and the fire stations and how the alarm comes in. That will give us some opportunities to do some things like pre-alert, which gives firefighters an even earlier warning when an alarm comes in, so they can get out of the door more quickly.

We are also developing an RFP for a new computer-aided dispatch system so we can take advantage of a lot of the next generation 911—texting in emergencies, sending in digital video clips. Our goal with every call is to send the correct resource to the correct location as quickly as possible, and that technology will help us quite a bit.

How is being a firefighter in Los Angeles different than it is elsewhere?
There are so many different hazards here that firefighters have to become Jack-of-all-trades. They have to be good at so many different things, and because we respond on close to 1,100 calls for service every day, you get a lot of sets and reps of doing those skills. I think it’s an environment that generates some of the best trained, highest motivated men and women in the country.