Home Uncategorized At The Speed of L.A.: See The City Through Hyperlapse Technology 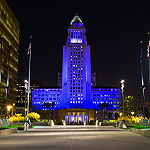 L.A.-based filmmaker Sean Collins may be a transplant (from Europe, no less), but his new hyperlapse video indicates that he’s finally starting to think like a local.

Though he’s only been here ten years, Collins captures some of the city’s most iconic locales with the enormous affection of a native. He chose the various landmarks based on his fondness for L.A.’s distinctive architecture, including City Hall, The Griffith Observatory, and Walt Disney Concert Hall: “The sites I showed have been filmed by everyone,” Collins says. “So I was motivated to [use hyperlapse to] capture L.A. in a different way.”

Hyperlapse video requires an immense amount of time. Over the course of a month, Collins visited each location at all hours of the night in order to get clear shots. He’d take a photograph, move the camera, and then take another, repeating the process upwards of 100 times. He then merged the single pictures into a video sequence in post-production. “If you mess up one photograph, the whole thing wont work,” he says. Lucky for us, he kept at it. Watch the video in full below.

THE CITY OF ANGELS from Bodhi Films on Vimeo.