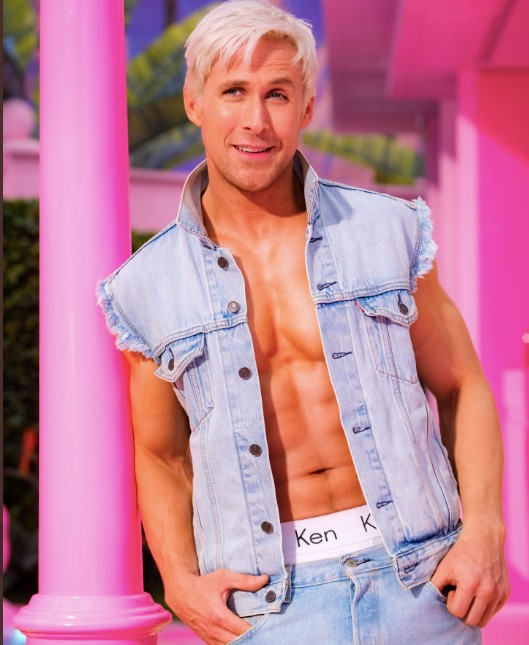 Is Ryan Gosling finally atoning for the creepy 2007 indie Lars and the Real Girl? A new photo from the set of Greta Gerwig’s Barbie shows the 41-year-old actor in full Ken drag, complete with spray-on abs, bleached hair and tightie-whities bearing his name. He’s framed by what one can only assume are the majestic columns of Barbie’s dream house, hued a pitch-perfect bright pink.

One would be hard-pressed to cast a better literal boy toy—but if Gosling’s not your (molded plastic) cup of tea, he will apparently be merely one of several Kens. Simu Liu and Ncuti Gatwa, the new Doctor himself, will play Kens as well, according to the New York Times, which also reports star Margot Robbie won’t be the only Barbie, as she’ll be joined by Issa Rae and Hari Nef.

Barbie has languished in development for years now, with Amy Schumer originally attached to write and star. The comic dropped out in 2017, citing “scheduling conflicts,” but in a profile this March, she said she knew the project wasn’t for her when Sony sent over a pair of Manolo Blahniks as a celebratory gift: “The idea that that’s just what every woman must want, right there, I should have gone, ‘You’ve got the wrong gal.’”

In 2019, Gerwig signed on to co-write the Barbie screenplay with her husband and frequent collaborator, Noah Baumbach. Last year, it was confirmed that Gerwig would be directing, too. With an apparent multiverse of Kens and Barbies—plus who knows what array of Skippers and Midges and assorted other characters from the Mattel family-and-friends tree—this Barbie has the potential to surpass its hilariously unambitious subject matter.

After all, given Gerwig’s track record of intelligent, warm, quirk-filled portrayals of womanhood—let’s revisit Saoirse and Timmy dancing in Little Women, shall we?—it’s hard to imagine she’ll be releasing anything that doesn’t subvert the notion of a high-heel-molded foot. Or, as Vogue UK put it, her stewardship of the brand “promises to embrace both the feminist worryings and the memories of grinding two dolls together for a very long time until one is quite red and bothered.”

Meanwhile, you’ve got Gosling, who’s been relatively off the radar since 2018’s First Man, and soon to be seen in Netflix’s The Gray Man, a meh-looking, explosives-heavy flick from the Captain America: Winter Soldier-directing Russo brothers. But never forget, Gosling is the man who once launched a thousand thirsty feminist memes.

There’s all the reason in the world to think Barbie may be the perfect effervescent tour de nostalgia of 2023, and the second coming of Sensitive Ryan Gosling. Hey girl, it’s been too long.