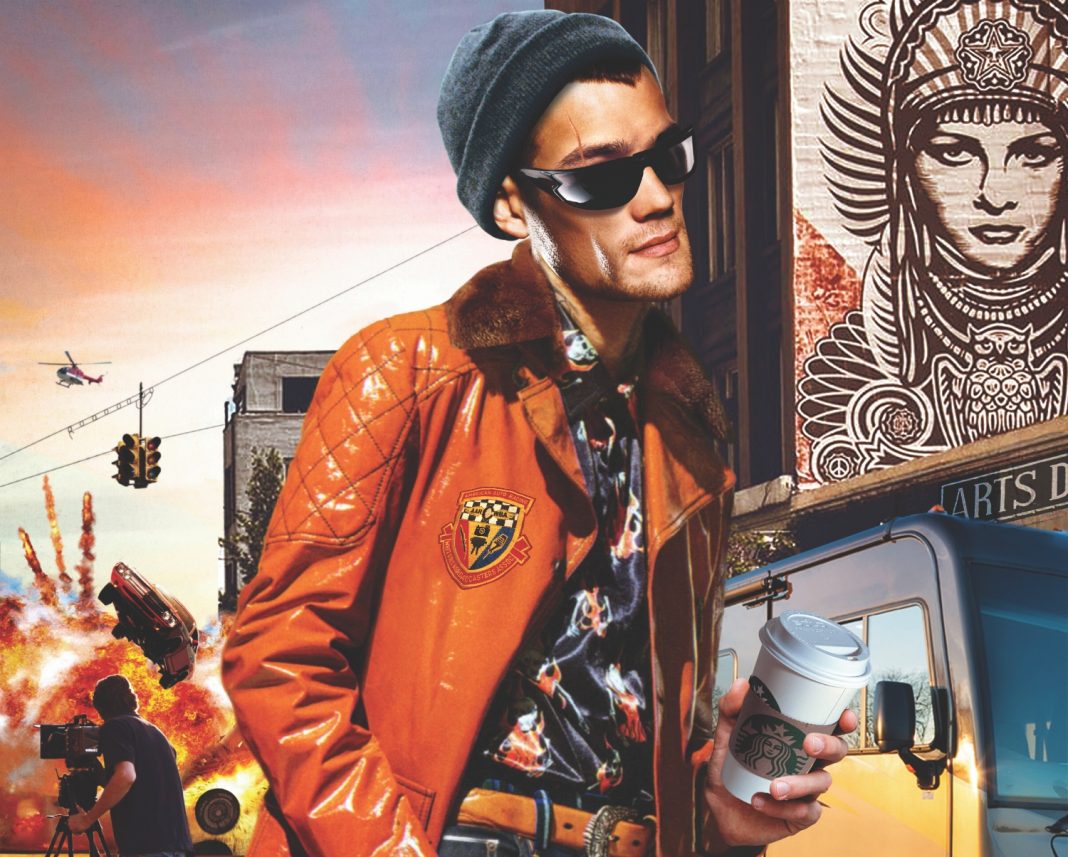 A black matte Porsche Cayenne carrying a giant swooping camera is purring alongside a red-brick condo that looks like Gentrified Anytown, USA. On the corner, two harried production assistants shoo an impatient crowd of pedestrians away from their prized shot: a sedan that’s been so thoroughly shellacked it could cook an egg.

It’s another day in the Arts District, where street activity can border on the surreal. Wild helicopter stunts. Fake homeless people. SWAT teams bursting out of doorways. Wedged between the L.A. River and Skid Row, the neighborhood has a chameleonic ability to fit a range of productions. Jonathan Jerald, a longtime resident and the intermediary between the studios and local businesses, estimates that as many as 1,500 crews shoot here every year. When The Fast and the Furious needed to film a street riot, its crew manufactured one in Alameda Square. The Nate Starkman Building, mere steps from sleek eateries and the future home of Spotify, was set ablaze for the finale of House. And Netflix recently built a gas station on Molino Street only to blow it up three weeks later.

All this activity comes with problems, including a host of imbroglios between residents and filmmakers. There was the time an irate clothing-store owner blasted music outside the set of It’s Always Sunny in Philadelphia and didn’t cease until Danny DeVito personally delivered him $1,000 in cash, says Jerald. Then there was the knife-wielding sushi chef at a fancy restaurant who chased a truck driver out of his parking lot after a film crew had encircled it with a fake homeless encampment. Cops had to be called in to sort things out (real ones, with badges).

The skirmishes intensified as the Arts District grew. Before the mid-’90s, the storage spaces, lofts, and derelict alleyways that stretch from Skid Row to the river were treated pretty much as a back lot by production companies, with little concern for residents. But there weren’t many residents around to complain. Prior to the 1970s, the area was composed of trucking companies and cement-walled warehouses, not apartments and third-wave coffee roasters.

Car blasts, chases, and even helicopter stunts were an almost daily occurrence, Jerald recalls. He remembers one incident when a crew lit up his neighborhood in the middle of the night, bathing his apartment in blinding white light. When S.W.A.T. filmed a high-speed chopper pursuit over the 6th Street Bridge, he wasn’t even phased.

Street closures and shoot-outs, of course, are more likely to stoke local ire. But tensions are thawing, thanks to a charter that Jerald helped write with representatives from Warner Bros. and the LAPD. New rules require filmmakers to pay for disruptions and warn the public about upcoming gunfire or explosions. Also, if someone accidentally parks on a street that’s been cleared for filming, a local tow company now swoops in to move the vehicle out of sight only to return it, unticketed, once the shoot has concluded.

New rules require filmmakers to pay for disruptions and warn the public about upcoming gunfire or explosions.

Many buildings in the neighborhood remain in high demand. Stephen Blum bought an abandoned rag warehouse on the corner of Palmetto and Mateo streets back in the early 1980s and received his first call from a commercial director before he’d even finished repairs. “After that, people just kept knocking on our door,” he says.

His property, the Starkman building, has since hosted so many productions over the years that Blum can’t recall them all. And as the Arts District booms, he worries it will become too expensive for filmmakers to shoot there. Still, Jerald reports that while police dramas are less prevalent, commercial shoots are way up, and a new wave of social media stars and Instagram models has flooded the neighborhood. “Everyone loves a gritty background,” he says.

Lights, Camera, Hassle? What Happens When a Movie Location Becomes a Tourist Attraction