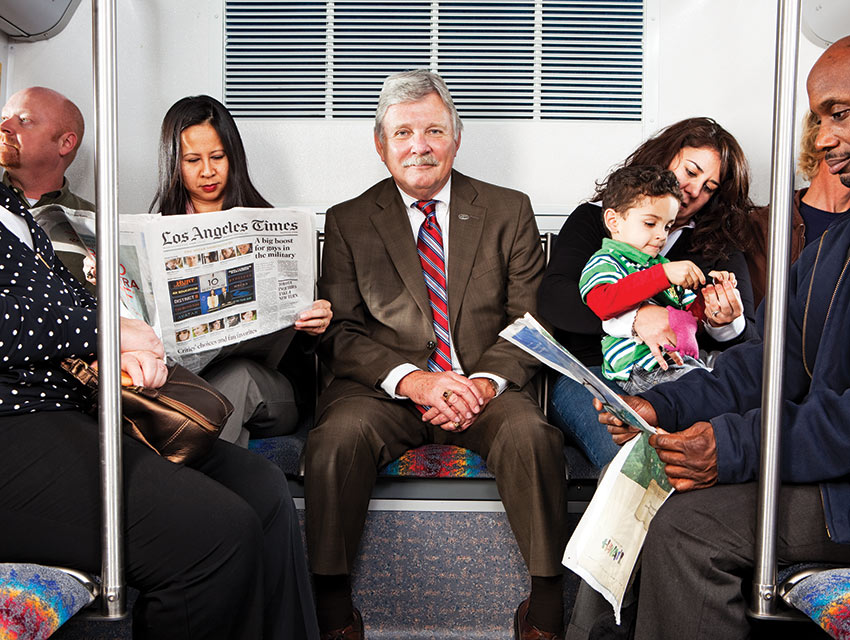 Last night, MTA CEO Art Leahy announced his plan to resign in April, after six years in the role.

In a release about Leahy’s resignation, mayor Eric Garcetti said, “Millions of people will get to work and home to their loved ones faster because of [Leahy’s] stewardship of the nation’s largest public works project, the implementation of Measure R.” When we spoke with Leahy, who began his career as a bus driver, about that transportation program back in 2010, he told us, “by accelerating Measure R sales tax-funded transit and highway projects, we have the opportunity to create hundreds of thousands of jobs to build our way out of the recession while sharply cutting greenhouse gas emissions and easing traffic. At the same time we’d cut construction costs by beating inflation and securing more competitive bids in today’s soft construction market. Los Angeles could be a model for the nation if Congress lets us leverage local transportation sales taxes with zero- or low-interest federal loans and guarantees so we could get the construction money up front.” Since then, the Metro has completed its Orange Line Extension from Canoga Park station to Chatsworth, among other projects.

Leahy also told us that he wanted to revolutionize how Angelenos get around. “In response to the congestion and fuel prices and other things, we see people much more willing to live in a truly urban environment than we saw 30 or 40 years ago,” he said. “I think we’ll see people making decisions about where they live relative to where they work based on using the transit system.” To improve that system, Leahy focused on refurbishing the bus and rail lines, making transit options more accessible, and the creation of more carpool lanes and the expansion of some of our freeways. Said Garcetti, “Art Leahy’s impact on Southern California will be felt forever more.”