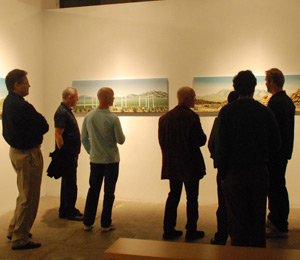 I love the Downtown Art Walk. Standing on the corner of 5th and Main and being swarmed by legions of black-clad, wine-sipping party hoppers was something I never thought I’d see come to pass. Upwards of 10,000 people join the monthly romp, and this week it seems like every one of them is bickering about the leadership of the group that puts the event together. Executive director Richard Schave stepped down amidst much hoopla last month, and the Web site blogdowntown.com shut down their comments page after a heated exchange erupted between gallery owner Bert Green and Schave’s wife and former board member, Kim Cooper. Cooper and Schave own the cultural tourism company Esotouric, which takes visitors to see the neighborhoods made famous by Charles Bukowski and the Black Dahlia. The fascinating dialogue between these downtown titans makes unpredictable and sharp turns from food trucks to the LAPD’s art theft detail to Theosophy founder Madame Blavatsky before heading back to 5th St. and the popular event in limbo—and yes, I know them all.

Hence, this breaking news just in: A new executive director has been named. Jay Lopez, the force behind Beyond Eden, East Hollywood Day of the Dead and the Silver Lake Gallery Alliance is taking the helm. Here’s hoping Mr. Can-Do Lopez can make peace between the artists and their bickering leaders and keep the crowds pouring into downtown to break bread (or at least cheese and crackers) with the gallery owners, new restaurants, and the last remaining hobos in the nickel.