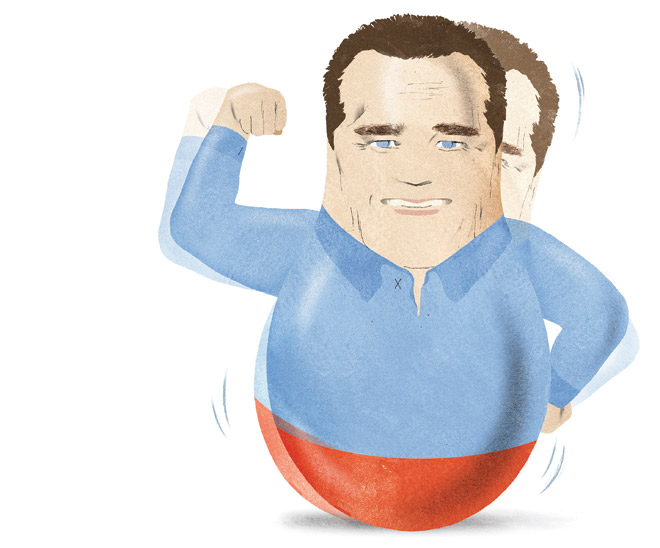 When Arnold Schwarzenegger left office, my friends and I speculated aloud about his next move. What does a guy like him do, this macho governor who had more or less botched the job? He limped out of Sacramento with a 22 percent approval rating. It’s remarkable that he even made it to the head of the state—twice. He had no previous government experience; he zoomed to the front of the class, if you will. Of course that says as much about us, the voters, as it does about him. We are suckers for celebrities, and this one happened to personify—at least in the pretend world—a larger-than-life hero who could rescue us, make us feel protected. But once in office, he was a disappointment. He insulted his opponents and slashed social services while leaving us in terrible fiscal shape. Surely he would seek a sort of redemption, right? There was no significant office he could run for (and win). That avenue to public acclaim was over. Here was a man long used to the spotlight and the approbation that came with it. Where would he turn? What would be the new source of success and applause?

Then came his real fall from grace: the small matter of his marital scandal. We all know the details—that he fathered a child with a woman who worked in his house. When the child’s resemblance to his father became obvious, the cat was out of the paternal bag—or somesuch. Hideous. My friends and I decided Schwarzenegger had moved to the top of the cad list, though John Edwards was a close second. This disgrace would inevitably increase pressure on him to pursue a form of reputation rehabilitation. Nope. He was committed to returning to Hollywood and becoming an action hero again.

We were struck by his choice. It seemed a waste. You spend all this time becoming this major puffed-up guy—literally and otherwise. Why not throw that charisma and chiseled bulk, not to mention part of your considerable fortune, at something important? You can’t be serious about getting back into the movie racket. He did write his memoir, Total Recall (complete with the story of his in-house adultery), which didn’t sell well despite all the media hoopla. So now he’s returned to old turf with his first post-gubernatorial, post-scandal flick, The Last Stand, just hitting our screens.

Watching Schwarzenegger is déjà vu and Dorian Gray at the same time. Part of me says, You’re kidding, yes? Do you really want to be in a silly shoot-’em-up at age 65? The other part of me grudgingly admires his indomitable survival instinct, his Machiavellian optimism, if that doesn’t sound like an oxymoron. I don’t think it does. You pick up on that very quality when you’re around him, as I have in various social situations through the years. Perhaps he doesn’t permit himself to look back or have regrets—certainly not the kind that would humble him or bring him to his knees.

I admit there is a perversely refreshing quality about someone who refuses to bow to the scolding media hordes. Here he is in The Last Stand, long past his prime, playing a small-town sheriff with all his squints and struts of yore. He does look a bit preserved, though he denies having had plastic surgery. He clearly dyes his hair; it has the too-deep brownish color men often seem to acquire when they are covering their gray (even those who, like the ex-governor, have been known to patronize a first-rate “girly” salon). But Schwarzenegger dares you to smirk at or pity him by making jokes at his own expense. At one point in the film, his character is knocked out cold. When he regains consciousness, a bystander asks him how he’s feeling, and he quips, “Old.”

Onscreen Schwarzenegger has never had the Eastwood earnestness. Despite the tough-guy exterior, there has always been a wink in his persona, arguably his best asset. He knows that what he has pulled off is amazing and amusing. Here’s a guy who hoisted himself up by his abs and pecs, a man who could have been an object of derision—the preeningly muscle bound aren’t usually taken seriously—but he preempted any sniggering with his own hard work and charm. His is an improbable trajectory, and he radiates a self-conviction (some would say narcissism) that is breathtaking in its scope. He was always a star, a beacon; even people who disagreed with him came away tickled by his attentions. I have seen it up close, that uncanny beam he casts out, enchanting those on whom it falls. Now his seductive powers are again on the big screen, as if the governorship were a lark, an ego reach, an interval between the real work of making movies.