Home Politics Why L.A.’s Armenian Community Wants You to Pay Attention to the Situation... 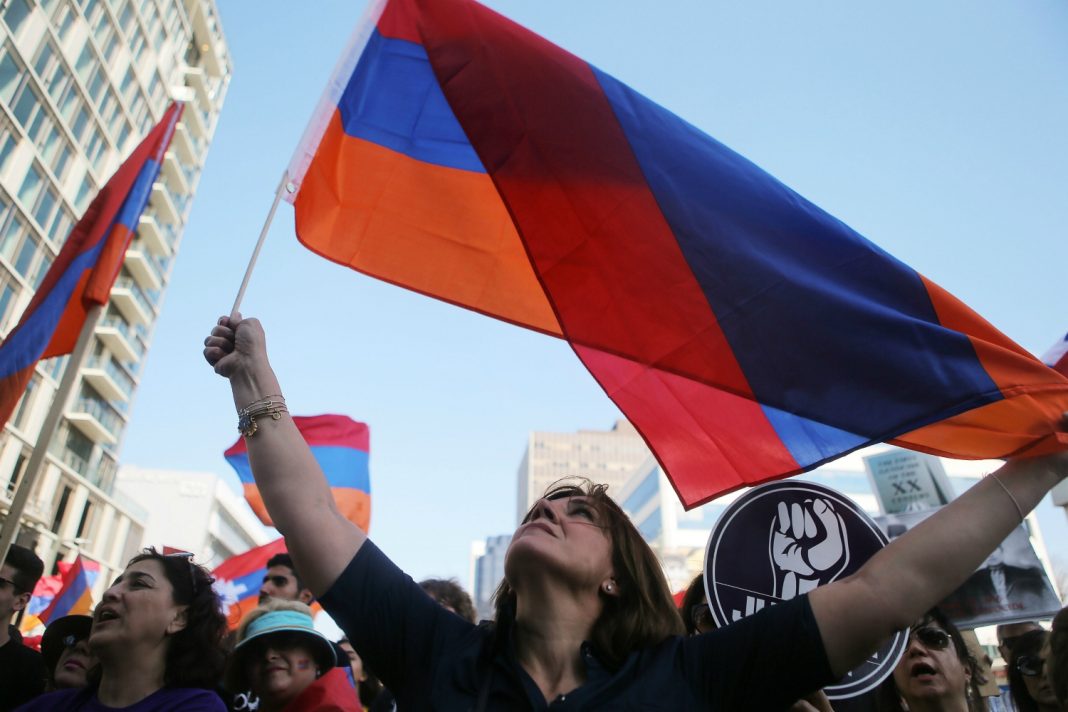 Last week, Pasadena-based comedian Mary Basmadjian, organizer of the recurring showcase Armenian Allstars, got serious on Instagram. In a nine-and-a-half minute video, she explained the fears of diasporan Armenians as a military conflict between Armenia and Azerbaijan continues to cause death and destruction in the southern Caucasus region. “This is literally about existing,” she said. “They don’t want us to exist.”

The escalating clash centers around a region known internationally as Nagorno-Karabakh, which Armenians call Artsakh, an ethnic Armenian enclave that was designated as part of Azerbaijan by Joseph Stalin in the 1920s. Its independence, declared by referendum in 1991, has been a source of struggle in the post-Soviet era, resulting in a war that lasted from the late 1980s through 1994. (Nagorno-Karabakh is not recognized internationally as an independent nation.) While there have been flare-ups in recent years, the fighting that began in late September has been particularly troubling for the global Armenian community.

While the Republic of Armenia is allied with Nagorno-Karabakh, Turkey, which continues to officially deny the Armenian Genocide of 1915, supports Azerbaijan. News organizations have covered the events of the past week as a clash over territory, but Armenians often use the word “existential” to describe the current threat. For Armenians, it’s about a right to exist and a fear that a genocide that began 105 years ago will continue while the world turns its eyes away.

Armenian-led organizations across the world have been mobilizing to raise awareness and funds. Individually, Armenians both within the country and in the diaspora are using online platforms to inform people outside the community. “I just turned on the video and I wanted to speak to my non-Armenian friends, my non-Armenian colleagues,” Basmadjian says of her video, which has racked up more than 73,000 views in four days. The response was better than she expected, especially considering the video’s length. People have been sharing it. They’ve been asking her questions. “I’m just trying to get the word out as much as I can,” she says.

While coverage of the conflict remains somewhat scant the U.S. media, Armenian-Americans have been leveraging their talents to urge friends and social media followers to pay attention. For Glendale-based baker Anahit Kardzhyan, that meant making cake pops. She whipped up a batch that resembles Armenia’s red, blue, and orange flag, a colorful, Instagram-friendly image that could introduce her followers the issue. “Now is the time where we have a platform and my generation needs to speak up because we need to make our ancestors proud,” Kardzhyan says by phone. “We don’t want our children to go through what our families went through.”

The art collective She Loves is planning a public performance piece for Sunday, October 11. The Rifles Our Ancestors Didn’t Have is intended to be a call for peace inspired by both the Armenian Genocide and the current crisis in Nagorno-Karabakh. Founders Adrineh Baghdassarian and Nelly Achkhen are Armenians from Iran and Lebanon, respectively. “I felt Artsakh in my bones,” Baghdassarian says of her visit to the region.

“The bottom line is that we don’t want another, repeated genocide, and we need the international community to really commit itself to stop something,” Achkhen adds.

USC’s Institute of Armenian Studies had been planning a course on Armenia and Azerbaijan relations since the two countries clashed in July, but recently opted to turn the program into an open series of online talks in English featuring scholars, politicians, and others that begins on October 9. “This conflict has relevance in the U.S., California, particularly Southern California and L.A., in ways that are possibly surprising,” says Salpi Ghazarian, director of the Institute of Armenian Studies, who will be moderating the talks, by phone. She points to the diversity amongst Armenians locally. For those who are more recent immigrants from the Republic of Armenia, the events may trigger not-too-distant memories of the Nagorno-Karabakh conflict of the 1990s. For others, who may not have that kind of personal connection to the struggle, the trigger might be in Turkey’s rhetoric and its eerie parallels to that of the Ottoman Empire at the time of the Armenian Genocide. “In Southern California, this has amazing resonance,” she says.

The connection Armenians are making between 1915 and today is evidenced by several protests that took place during the past week. Vahe Kallibjian and his family were in attendance at a Saturday evening protest in front of the CNN building in Hollywood. “We went to the protest because, growing up in Los Angeles, we’ve always been part of marches and protests regarding our cause, basically recognition of the Armenian Genocide,” he says by phone. Kallibjian described the protest as having a “positive energy” and bringing out a lot of emotions in the attendees. “Everyone wants peace,” he says. “Like it’s been said all over social media, if they want peace, then they’re going to have it, but if we back down, then they’re going to exterminate us.”

Natalie Samarjian had attended protests at the Azerbaijan Consulate and CNN in the week following the attack. “I will take my body and my voice everywhere, anywhere that my brothers and sisters in Armenia need us to be and need me to be,” she said by phone from a Sunday evening rally in Glendale. “I think we are all experiencing a combination of deep pain, a boost of energy and invigoration,” she said of the crowd in Glendale. “Our brothers and sisters in Artsakh are taking their bodies on the line to protect the Armenian people and we feel like it’s our responsibility to do whatever we possibly can here. The mood is also full of a lot of our intergenerational trauma and fear coming to surface. Anytime you deal with a community like ours that has been devastated by a genocide, a re-attempt at that is incredibly terrifying.”

Reaching out beyond the Armenian community is key and has included actions like contacting local politicians and urging celebrities for vocal support and calling out media for greater coverage, all the while educating people about Armenian history and identity. The reality is that there are people who don’t know much, if anything, about Armenians, despite that Los Angeles is home to one of the largest populations of Armenians living outside Armenia.

“If people understand our cause and what we’re fighting for, and know who we are in general, that’s the best way to reach justice,” says Derik Ambarsoomzadeh, a senior economics major who serves as the Political Activism Chair of UCLA’s Armenian Student Association. “Quite frankly, our inability to be heard and our inability to be seen is a large factor in the inability for Turkey to face justice for their actions for the Armenian Genocide, which is a factor that has allowed them to continue on with injustices towards our community.”

In ordinary times, the members of UCLA’s ASA might be passing out flyers on campus, but with COVID-19 keeping the students socially distanced, they’ve had to use other tactics, like reaching out to other student organizations for solidarity.

Internationally, the current situation in and around Nagorno-Karabakh has made more news, due in part to its strategic location and the tension that a growing conflict could ultimately involve more international players. But, experts say there are also human rights issues that needs to be addressed.

“Although the conflict itself and its lasting resolution are complex, as are so many things around the world, actually stopping ethnic cleansing and saving lives right now is not complex,” says Ghazarian of the Institute of Armenian Studies. “The international community has to make it clear to Turkey and Azerbaijan that nobody is going to stand by and watch this ethnic cleansing happen because that is exactly what they are doing.”

On Monday, October 5, a press conference in front of Los Angeles City Hall brought together L.A. City Councilperson Paul Krekorian and others, including Mayor Eric Garcetti and Representative Adam Schiff to speak out in solidarity with Armenia and Nagorno-Karabakh. “We demand that our government—our government, in Washington—engage immediately and aggressively to bring and end to this violence and to hold the Azeri and Turkish governments fully accountable for these crimes,” Councilman Krekorian said.

In L.A., both the big protests and small actions, like personal videos and social media posts, have made a difference. But, will these efforts push the United States to work for peace?

“People need to understand that this is an unnecessarily, absurdly, possibly irreversibly internationalized conflict and it must be stopped today, tomorrow for that reason,” Ghazarian adds. “It really may become irreversible.”