Home A Day in the Life We Need to Know: What’s It Like to Live in an Apartment... 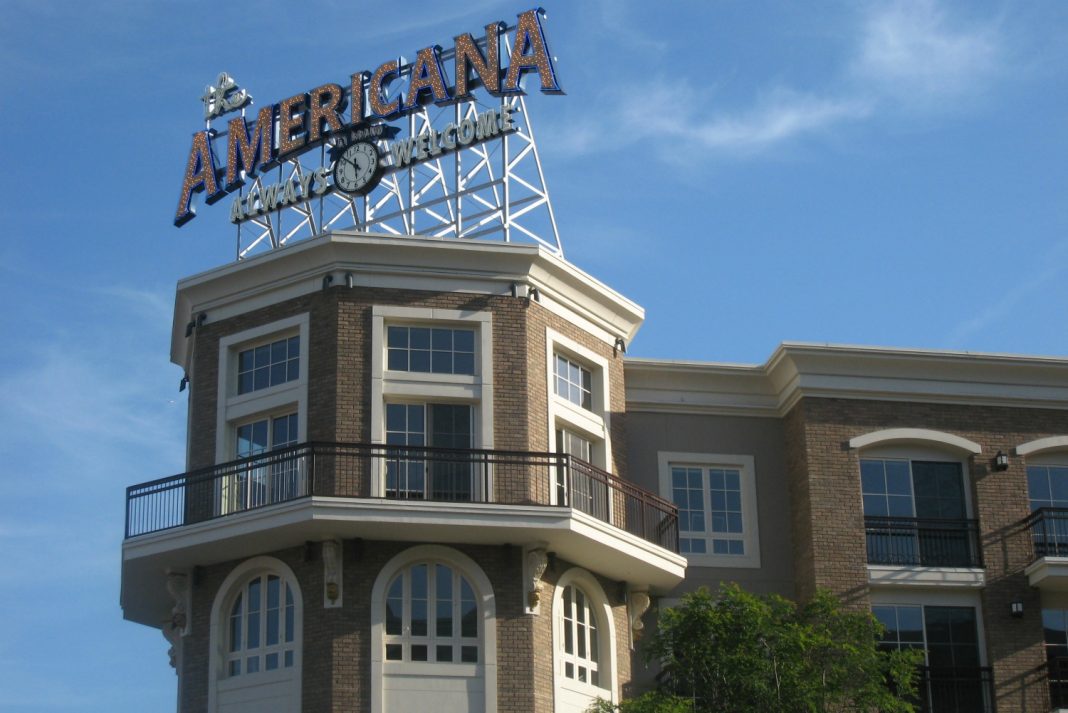 The Internet is grievously divided over the idea of living inside a shopping mall.

A scroll through Yelp reviews of the Americana at Brand reveals wildly divergent opinions about what it would be like to reside in one of the mall’s on-site apartments, currently renting for a minimum of $3,100 a month. Are these apartments “an abomination unto god,” as one reviewer puts it, or is there something charming about spending your days (and nights) in an open-air shopping palace, taking a vintage trolly from your apartment to such far flung destinations as Nordstrom and the Capital One Café?

Rick Caruso’s sprawling Glendale shopping mall has been home to more than 200 apartments since the complex opened in 2008, but few articles have been published about what it’s like actually living in one of them (an exception being the L.A. Times’ photo-essay “Sleepover at the Mall” in 2014). Does Frank Sinatra’s crooning become oppressive? Does it still feel like Glendale? Do a dancing fountain and some well-pruned shrubbery create a totally normal backdrop for quotidian tasks like painting your nails or watching Judge Judy?

To understand what it’s like navigating day-to-day life inside Caruso’s vision, we reached out to Lara Shah, an actress from New Jersey who has been living in the Americana for more than a year. Spoiler-alert: She loves it there.

So, how long have you lived at the Americana at Brand?

I’ve lived here since August of 2017, in two different apartment buildings—the Lido and the Continental, where we’re currently staying. At our new place, we have a fountain-facing view with five windows, so there’s lots of natural light. We can watch the Bellagio fountains, and when the Christmas tree is installed, it’s front-and-center outside our windows.

Have you memorized the choreography of the fountains?

Yeah, it’s pretty much the same synchronized movements. It’s actually funny—with the windows, we don’t really hear much of the Frank Sinatra music but we’ll hear the “pop” of the fountain when a song reaches its climax. Other than that, it’s like our own quiet retreat.

Yeah, and we’d be tired of all the noise, especially during holiday season.

About that: when you watch the soapy snow falling down on a fake winter wonderland, does it still feel like you’re living in Los Angeles?

It doesn’t, which is really cool. I’m from the East Coast originally, so considering we don’t usually get snow here, this is the next best thing.

Do you have pets and if so, where do they poop?

We have two cats and we have a litter box on the balcony. Our baby cat has jumped off the balcony in both of our apartments. She gets bored and wants to socialize.

Oh no! Did she fall on a shopper?

No, thankfully she was taken in by our neighbor on the second floor. He brought her inside for safety but then left for work and didn’t tell the leasing office that he had her, so we were knocking on doors all day before he brought her back to us.

Have you found that more and more of your money is being sucked into Rick Caruso’s bank account?

I’m actually not a huge shopper. You’d think I would be. But what’s great about living here is that if I want a dress for an anniversary dinner, I can run out and get that at Nordstrom. Or if I run out of makeup, I can buy it at Sephora. If our phones malfunction, we can get them fixed at the Apple store. It’s just so convenient. The only thing we actually need to go out and get is our groceries at Whole Foods. I could get that delivered with Amazon Prime but I do like to leave the apartment, sometimes.

So you don’t find yourself at Lululemon in your bathrobe at 10 p.m.?

No, but on Friday and Saturday nights, we sometimes wear our PJs when we’re strolling around the mall and everyone is all dolled up for date night. We’re like, wow, this is where people come to take their pictures and we’re walking around like hobos because we can’t be bothered to try.

Do you feel like you’re living in a place that’s of the city but not in the city, if you know what I mean?

Yeah, we’re in this self-contained universe. For Valentine’s Day, there are promotions for couples with prix-fixe menus. Yoga on the Green is 11 o’clock on Thursdays. There are so many events—any entertainment we’d want is right here. Even to get to the gym, pool, or jacuzzi, we can just walk underground. We don’t have to interact with anyone.

Yes, all the buildings and the garages are connected underground, so if we don’t want to be outside, we don’t need to be. It’s actually safer because only residents are allowed underground.

What do you make of those who say the Americana is artificial, overly manicured, and hyper-consumerist?

I think they’re wrong. I mean, the trees are real, the grass is real, the water is real. Granted, it’s extremely manicured but if you’re going to have this beautiful place, why not upkeep it to ensure it has the same high-end luxury feel as all the stores that surround it? Who wants to look down and see brown grass and unkempt trees? I think they’re just naysayers.

Correction: The post has updated to indicate that Disney World, not Disneyland, has an underground tunnel system.