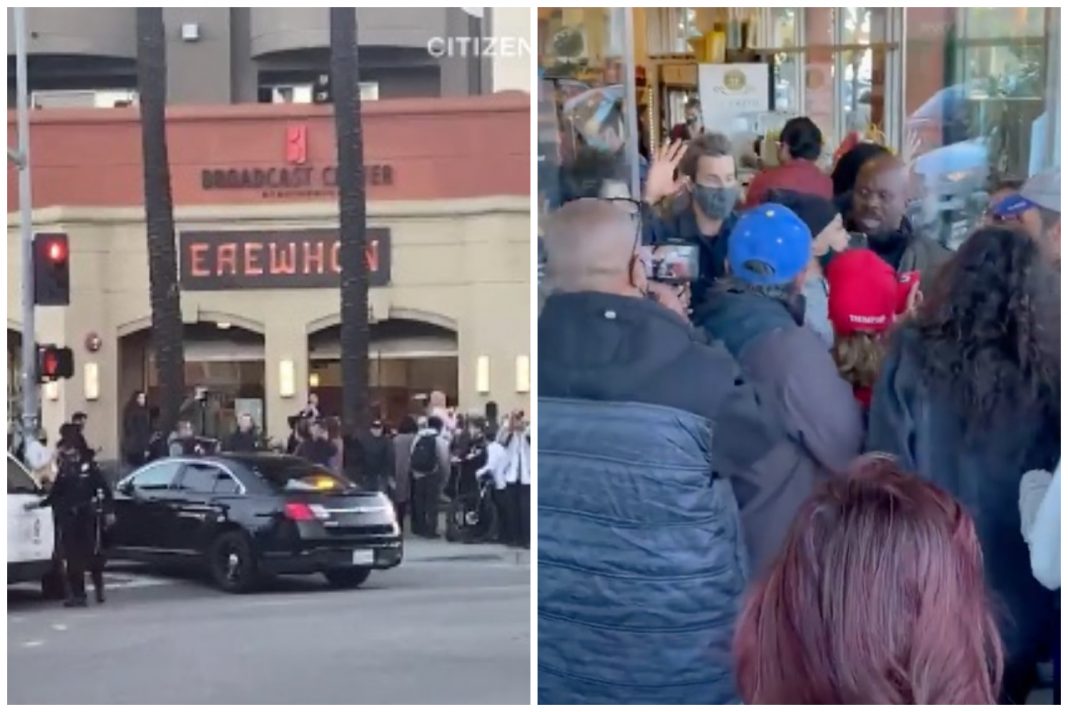 A group of around 50 anti-mask protesters reportedly swarmed the Beverly Grove location of luxury grocery store Erewhon on Tuesday afternoon. The demonstration may have been linked to recent pro-Trump demonstrations in Beverly Hills, including the “Beverly Hills Freedom Rally,” based on shirts and hats observed on some participants.

Shopper Ira Brian Miller posted video from the scene on his Instagram and Twitter accounts, which quickly spread online.

“I was approaching Erewhon market today in search for some vegetables and cheese, and as I got to the entrance I noticed about 50 or so people storming the entrance of the building,” Miller tells Los Angeles. “As I looked closer at the people that were in a stampede rushing the doors, I noticed a lot of Trump hats and no one wearing masks. It seemed as if they were anti-maskers.”

Miller says he watched the group “bum rush” into the store. He says at least one member of the group appeared to be filming videos of herself attempting to convince masked shoppers they did not need to wear coverings and to “live their lives.”

“There were a few people becoming violent and got pretty physical with one of the workers at Erewhon,” Miller says.

According to reports and video posted to the Citizen App, police responded to the scene around 3:30 p.m.

At least one protester held a yellow poster that appeared to compare politicians supporting mask mandates to Nazis.

Los Angeles is currently in the grips of COVID-19 surge which has overwhelmed health care capacity and is causing an individual in the county to die every 10 to 15 minutes.

In September, CDC chief Robert Redfield described face masks as “the most important, powerful public health tool we have” when it comes to quashing the pandemic.