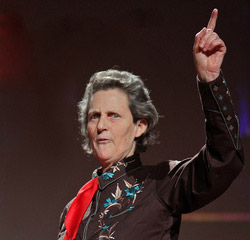 “I was very surprised to discover how vast the range can be. I was impressed by how broad the autism spectrum is. How idiosyncratic each case, for lack of a better word, is,” Claire Danes told us in the current issue of Los Angeles magazine. Sunday night Temple Grandin, HBO’s innovative biopic on the autistic animal scientist and writer, scored five Emmys. Claire Danes won for Best Actress for her portrayal of Grandin. Julia Ormond, who played Grandin’s mother, took home the prize for Best Supporting Actress; David Strathairn won for Best Supporting Actor—his role was as Grandin’s teacher and mentor. Emmys also went to the production for Directing and Best Made-For-Television-Movie. Grandin stood and waved from her seat in the audience after each win and asked her mother to stand and be recognized when she took the stage during the film’s big win. “I know you’re nervous, but stand up!” Grandin shouted in her trademark cowgirl duds. While accepting the award, producer Emily Gerson Saines mentioned that her child is autistic, then remarked, “Autism has reached epidemic proportions.” She’s right. Check out our September issue, which has a special section on living with autism in L.A.