Home Uncategorized Another Don Draper Revelation: His Childhood Home is in Angelino Heights 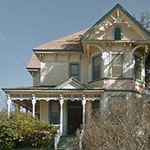 Mad Men’s season six finale was chock-full of revelatory moments, but along with a deeper understanding of where this year’s story lines have been heading (straight into an apron, for Bob Benson), we got a special kick out of seeing the characters fight over the chance to move to Los Angeles. Because no, it’s not “like Detroit with palm trees,” Don.

Now TV Guide writer Michael Schneider has pointed out at Franklin Avenue that a six bedroom/one bath Victorian in Angelino Heights was selected to represent Don Draper’s childhood home, which wasn’t very homey at all. The production films in Los Angeles, but few locations are as recognizable on screen as the one used in the final moments of season six. Take a look: RELATED: Confessions of a Mad Man: In Conversation with Matthew Weiner