Home Art From an Activist to a Comedian, Here Are 11 L.A. People to... 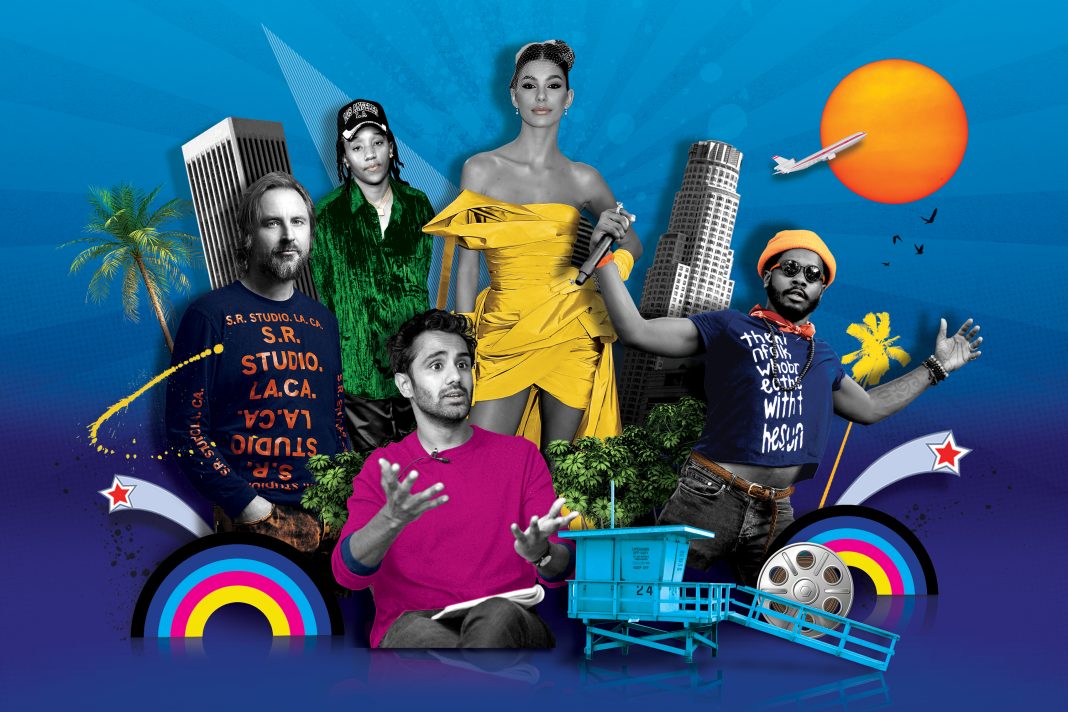 From well-known figures with big projects on the horizon to up-and-comers on the verge of breaking out, here are some fascinating local people to keep an eye on this year.

When protests opposing a proposed homeless shelter erupted in Koreatown in 2018, Jane Nguyen and a handful of other residents countered by forming Ktown for All, a volunteer-run organization dedicated to assisting their unhoused neighbors. Since then, Nguyen—who is a fundraiser and a wedding photographer by day—has worked as a tireless advocate, organizing weekly supply distributions, pushing for a more humane homeless policy at City Council meetings, and amplifying stories from voices that might not otherwise be heard. As the city continues to tackle homelessness, expect Nguyen to be a major player. —Zoie Matthew

Born and raised in South Los Angeles, Lauren Halsey stole the show at the Hammer Museum’s 2018 Made in L.A. biennial when she erected a stark white structure on the mezzanine. Built of gypsum panels carved with words and visuals that symbolize African American life in L.A., that incarnation of her Crenshaw District Hieroglyph Project was just a prototype for a much larger version that’s in development for a future public site in South Central L.A. Halsey, 32, closed out 2019 by collaborating with Nike on a pair of L.A.-inspired Air Force 1 sneakers and will kick off 2020 with a big solo show at David Kordansky Gallery. Recently, she’s been exploring VR technology, using it to craft “fantasy geographies and all eras of funk—POC paradises that you can experience.” —Gwynedd Stuart

As a “surfacing” resident for The New York Times, Walter Thompson-Hernández has spent the past two years covering subcultures around the world, from Chicano culture in Japan to people with albinism in Ghana with nuanced, multimedia storytelling. This April, keep your eyes peeled for the 34-year-old’s first book, The Compton Cowboys: The New Generation of Cowboys in America’s Urban Heartland. An expansion of one of his Times articles, the story chronicles a group of horseback-riding childhood friends who carry on the tradition of black cowboy culture in South L.A. He also has a long-form narrative podcast in the works for KPCC. —Z.M.

The daughter of Argentine model-actors, Camila Morrone inherited her parents’ killer cheekbones and runway-ready moxie—she started modeling while attending Beverly Hills High School—before confirming her acting chops in Never Goin’ Back, Death Wish, and Bukowski. Morrone’s breakthrough role, as a small-town teenager with an Oxy-addicted father in 2019’s Mickey and the Bear, was lauded for its naturalism. The 22-year-old, whose relationship with Leonardo DiCaprio, 45, is a source of endless tabloid gossip, was recently cast in the Amazon series Daisy Jones & The Six, in which she’ll portray the girlfriend of the singer in a Fleetwood Mac-like band in the 1970s. —Michael Walker

If you saw Robyn or Vince Staples play in L.A. last year, hopefully you showed up early enough to see opener Channel Tres, an artist who catapulted from warm-up act to main event over the course of 2019. The Compton native dropped his second EP in August, and in October he was handpicked by Tyler, the Creator to craft the first authorized remix of one of Tyler’s songs. Going into 2020, Tres, 28, will be touring and also creating and releasing material with his distinctive sound—Chicago and Detroit house mixed with West Coast hip-hop. —Brittany Martin

In his first eight years in the NBA, Kawhi Leonard won titles with two different teams and was twice named the Finals MVP. Meanwhile, the Clippers have never even reached the conference finals. If L.A.’s “other” team is to eclipse the glitzy Lakers, much will depend on “the Claw,” who attended high school in the Moreno Valley. The Clippers’ success might ultimately hinge on Leonard’s health—he’ll sit out a bundle of regular season games to preserve his body for a deep postseason run. —Jon Regardie

San Fernando Valley-born Nury Martinez made a fortuitous move in 2013, jumping from a seat on the Los Angeles Unified School District board to the L.A. City Council. One of only two councilwomen, Martinez, 46, will start 2020 by taking the reins as president after being unanimously elected by her fellow council members in November. As she becomes the council’s first elected woman president in more than three decades, and its first Latina president, this might be the year she has an impact on the whole city. —J.R.

In the past few years, coworking spaces have proliferated more quickly here than poke bowl restaurants. London startup Second Home—which just opened a SelgasCano-designed flagship in Hollywood in November—is positioning itself as the anti-WeWork by focusing on creating diverse communities rather than cubicle farms. At the helm is Rohan Silva, 38, who served as former British Prime Minister David Cameron’s tech adviser before launching Second Home with Sam Aldenton. Silva moved to L.A. in April intending only to stay through the end of the year, but as he told Archinect.com, “We love it so much that we plan to stay at least through next year.” —G.S.

Sterling Ruby is already a world-renowned artist whose work has been displayed in museums and galleries across the globe, from the Tate in London to the Centre Pompidou in Paris. While the 47-year-old had dipped a toe into the fashion world in 2014 for a collaboration with Raf Simons, Calvin Klein’s then-creative director, Ruby charged headlong into clothing design last year when he debuted his first full men’s and women’s lines for spring 2020. His label, S.R. Studio. LA. CA., is an outrageous collection of hand-dyed and splatter-bleached denim, colorful plaids, and limited-edition print collages that are all unique, wearable works of art. Ruby said he doesn’t plan on creating seasonal collections, but he is looking forward to his next line. Most of the fashion world is, too. —Linda Immediato

Chef Brian Bornemann worked at an osteria in Tuscany before making a name for himself locally at the Tasting Kitchen and Viale dei Romani. Last year was a big one for the 29-year-old Santa Monica native, who took over the kitchen at Employees Only (which Food & Wine called “West Hollywood’s most exciting new restaurant” despite having opened in 2018) and picked up the reins at Michael’s, where he has embraced a more global take on California cuisine. Anyone who has tried his chicken prepared two ways would be advised to keep an eye on what he’s up to in the new year. —G.S.

Self-described “hot idiot” Joel Kim Booster became beloved on the internet for his searing comedy about sex, drugs, and racism. In October, the South Korea-born, Illinois-raised comic, 31, made his sitcom debut on NBC’s Sunnyside as a ludicrously rich and petulant immigrant who makes declarations like “being smart just isn’t my brand.” Before that, Booster was writing for Netflix’s Big Mouth and Billy on the Street and Comedy Central’s critical smash The Other Two while also appearing on various podcasts seemingly every week. In 2020, he’ll join Keke Palmer to host a more inclusive, social media-driven reboot of popular ’90s MTV game show Singled Out launching in April.

Comedian And Actor Joel Kim Booster Is On Fire